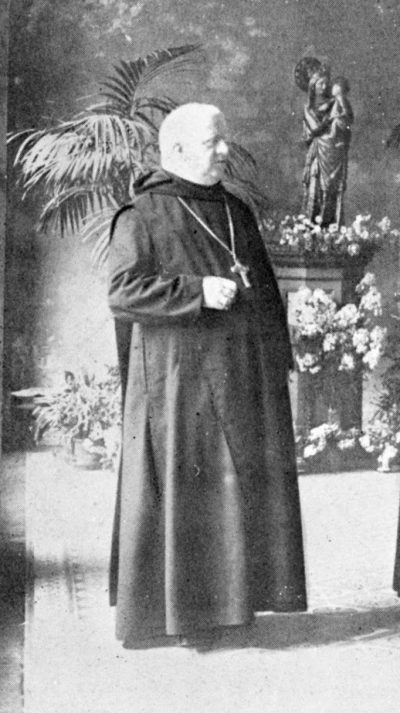 A Great Irish Benedictine
Today is the feast of a great Irish saint! Born and educated in Dublin, Joseph Marmion served as a curate in Dundrum and seminary professor at Clonliffe before becoming a Benedictine monk at the Abbey of Maredsous in Belgium. Dom Columba Marmion was elected of Abbot of Maredsous in 1909. He chose to receive the Abbatial Blessing on Rosary Sunday. It fell that year on October 3rd. When Pope John Paul II beatified Abbot Columba Marmion in 2000, the liturgical memorial of the new Blessed was fixed on the date of his Abbatial Blessing, rather than on the day of his death, January 30th.

Saint John Paul II
In 1985 Pope Saint John Paul II visited Belgium. When the papal helicopter flew over the Abbey of Maredsous on the way from Brussels to Beauraing, the Holy Father confided to one of his aides: “I owe more to Columba Marmion for initiating me into things spiritual than to any other spiritual writer.” The saints engender saints, and this in every age.

Cardinal Mercier, and Others
Cardinal Mercier, the holy Archbishop of Malines in Belgium and a contemporary of the Abbot wrote, after reading Christ, the Life of the Soul: “The perfume of Holy Scripture, to be breathed in at each page of this volume, gives the impression that it was conceived and prepared during prayer, at the foot of the altar, before being given to the public.” Pope Benedict XV kept the writings of Abbot Marmion close at hand and recommended them to the saintly head of the Ukrainian Catholic Church Metropolitan Andrei Sheptitsky of Lviv, saying: “Read this, it is the pure doctrine of the Church.”

A Lad Reads Marmion
My own introduction to Abbot Marmion came when I was fifteen years old. I was visiting Saint Joseph’s Abbey in Spencer, Massachusetts. Father Marius Granato, O.C.S.O., charged at that time with helping young men — even very young men — seek God, put Christ, the Ideal of the Monk into my hands. He even let me take the precious green-covered volume home with me. With all the ardour of my fifteen years I devoured it. No book had ever spoken to my heart in quite the same way.

I read and re-read Christ, the Ideal of the Monk. At fifteen one is profoundly marked by what one reads. The impressions made on a soul at that age determine the course of one’s life. As I pursued my desire to seek God, I relied on Abbot Marmion. I chose him not only as my monastic patron, but also as my spiritual father, my intercessor, and my guide.

A Good Spiritual Director
If you are looking for a good spiritual director, choose Blessed Columba Marmion. His books are being re-edited in attractive, revised translations that present his timeless doctrine in all its freshness and beauty. From his place in heaven he remains attentive to souls and ready at every moment to direct them to Christ.

Goodness and Humour
Those who knew Dom Marmion bore witness to the vivacity of his Irish temperament and to his marvelous sense of humour, capable of humanizing even the most solemn occasions. He showed an immense goodness as abbot and priest; he had a special place in his heart for the poor, the little ones, and those wounded by life. He sought always to bring happiness to people, allowing the best human qualities to flourish. “Grace,” he often affirmed, “does not destroy nature, nor does it suppress one’s personality.”

As a novice, Columba suffered under the direction of a Master of Novices who was singularly lacking in human warmth. He never forgot this and, later in his monastic life when he was entrusted with positions of authority, he did everything possible to be jovial, joyful, and full of compassionate sympathy in his relations with others. He did this in spite of long periods of spiritual darkness, even as he struggled through the seasons of depression that marked his whole life.

Participation in Our Lord’s Redemptive Passion
Blessed Columba entered deeply into the sentiments of Our Lord’s Sacred Heart. Through the writings of Saint John and Saint Paul, he contemplated the Face of Christ set toward the Father’s perfect will, the fulfillment of the Father’s saving design of love, the Father’s promise of glory. Thus did he come to see his own sufferings of body, mind, and spirit as participation in the redemptive sufferings of Christ.

The Word of God
Blessed Abbot Marmion had the gift of teaching souls to relish the Word of God. In his own experience, Sacred Scripture was, first of all, proclaimed, chanted, heard, held in the heart, and prayed, in the context of the liturgy. His astonishing familiarity with the Bible came to him not by way of study but through the Divine Office, the daily round of the Opus Dei, the Work of God celebrated in choir.

A Theology That Adores
Dom Marmion attributed to the words of the Bible the grace of a particular unction: something penetrating, a kind of sacramentality that puts us in communion with Christ himself, the Word before whom every human tongue falls silent. It was recounted that when Dom Marmion taught theology to the young monks, they would leave the classroom after his lectures in a reverent silence and go directly to the choir to adore. This is monastic theology!

The Soul of the Liturgy
As a spiritual father, Blessed Columba insisted on the primacy of the liturgy. Well before the Second Vatican Council, he preached the liturgy as “source and summit” of the life of the Church. He quenched his thirst for God in drinking directly from the liturgy’s pure wellsprings and led a great number of Christians to do the same. Dom Lambert Beauduin, another father of the classic Liturgical Movement, wrote concerning Abbot Marmion: “He revealed to us the soul of the liturgy; by this I mean all the elements of doctrine and of life, that the liturgy reserves for us beneath the visible veil of its rites and symbols.”

Christ, the Ideal of the Monk
In his book, Christ, the Ideal of the Monk, Blessed Columba generated a movement of return to the Rule of Saint Benedict and offered a re-reading of the text capable of irrigating the monastic life of every generation. His vision of Benedictine life is profoundly human and profoundly supernatural. He presents the monastery as a place where the Kingdom of God has already come, a place wherein every weakness can encounter mercy, wherein the human will is directed into the Will of God through the good that is obedience, and wherein every heart of stone, having become a heart of flesh through the grace of compunction, is freed at last to love and to be loved. He presents the abbot at the service of his brothers as a Father, as a Spirit-bearing Doctor, and as the Pontiff, the one who assembles the community to pass over into Christ’s own worship of the Father.