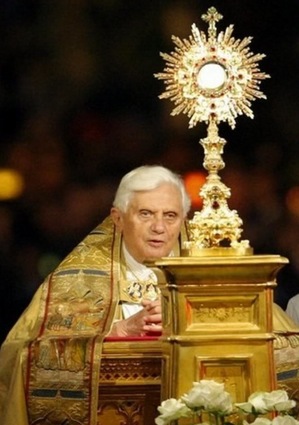 In celebration of the feast of Saint Juliana of Mont Cornillon, it is fitting to re–read Pope Benedict’s discourse (General Audience of Wednesday, 17th November 2010) on the great Eucharistic mystic.

The Woman at the Origin of the Feast of Corpus Christi
Dear Brothers and Sisters, this morning, too, I would like to present to you a little-known woman to whom, however, the Church owes great recognition, not only because of the holiness of her life, but also because, with her great fervor, she contributed to the institution of one of the most important liturgical solemnities of the year, that of Corpus Christi. She is St. Juliana of Cornillon, known also as St. Juliana of Liege. We have certain details of her life above all from a biography probably written by an ecclesiastic contemporary of hers, in which are gathered several testimonies from people who knew the saint directly.

A Eucharistic Cenacle
Juliana was born between 1191 and 1192 in the neighborhood of Liege, in Belgium. It is important to stress this place, because at that time the Diocese of Liege was, so to speak, a true “Eucharistic cenacle.” Before Juliana, eminent theologians had illustrated the supreme value of the sacrament of the Eucharist and, always at Liege, there were women’s groups generously dedicated to Eucharistic worship and to fervent communion. Led by exemplary priests, they lived together, dedicating themselves to prayer and to charitable works.

Lo, I Am With You Always
Orphaned at 5 years of age, Juliana and her sister Agnes were entrusted to the care of the Augustinian nuns of the convent-leper hospital of Mont Cornillon. She was educated above all by a sister named Sapienza, who followed her spiritual maturation, until Juliana herself received the religious habit and became as well an Augustinian nun. She acquired notable learning, to the point that she read the works of the Fathers of the Church in Latin, in particular St. Augustine and St. Bernard. In addition to keen intelligence, Juliana showed from the beginning a particular propensity for contemplation; she had a profound sense of the presence of Christ, which she experienced by living in a particularly intense way the sacrament of the Eucharist and pausing often to meditate on the words of Jesus: “And lo, I am with you always, to the close of the age” (Matthew 28:20). 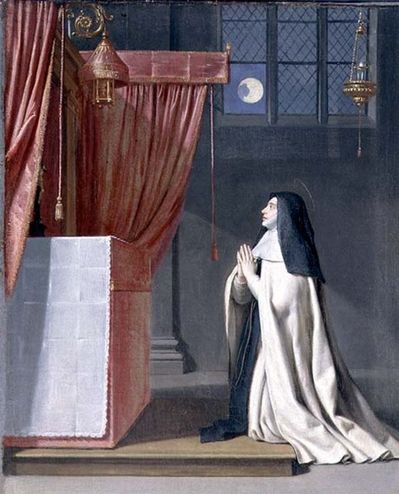 The Vision
At 16 she had her first vision, which was then repeated many times in her Eucharistic adorations. The vision showed the moon in its full splendor, with a dark strip that crossed it diametrically. The Lord made her understand the meaning of what had appeared to her. The moon symbolized the life of the Church on earth; but the opaque line represented the absence of a liturgical feast. Juliana was asked to do her utmost in an effective way to bring about its institution: a feast, namely, in which believers would be able to adore the Eucharist to increase their faith, advance in the practice of virtue and make reparation for offenses to the Most Holy Sacrament.

For about 20 years Juliana, who in the meantime had become prioress of the convent, kept secret this revelation, which had filled her heart with joy. Then she confided in two other fervent adorers of the Eucharist, Blessed Eva, who led an eremitical life, and Isabella, who had joined her in the monastery of Mont Cornillon. The three women established a sort of “spiritual alliance” for the purpose of glorifying the Most Holy Sacrament. They wished to involve also a much esteemed priest, John of Lausanne, canon of the church of St. Martin in Liege, asking him to question theologians and ecclesiastics about what they had in their hearts. The answers were positive and encouraging.

Friendship and Encounters With Other Good Souls
What happened to Juliana of Cornillon is frequently repeated in the life of saints: to have the confirmation that an inspiration comes from God, it is always necessary to be immersed in prayer, to be able to wait with patience, to seek friendship and encounters with other good souls, and to subject everything to the judgment of the pastors of the Church. It was, in fact, the bishop of Liege, Robert of Thourotte, who, after initial hesitations, took up this proposal from Juliana and her companions, and instituted, for the first time, the solemnity of Corpus Domini in his diocese. Later, other bishops imitated him, establishing the same feast in territories entrusted to their pastoral care.

Death in the Presence of the Divine Sacrament
To saints, however, the Lord often asks that they overcome trials, so that their faith is enhanced. This happened also to Juliana, who had to suffer the harsh opposition of some members of the clergy and even of the superior on whom her monastery depended. Then, of her own volition, Juliana left the convent of Mont Cornillon with some companions, and for 10 years, from 1248 to 1258, was a guest of several monasteries of Cistercian Sisters. She edified everyone with her humility; she never had words of criticism or rebuke for her adversaries, but continued to spread with zeal Eucharistic worship. She died in 1258 in Fosses-La-Ville, in Belgium. In the cell where she lay the Most Blessed Sacrament was exposed and, according to the words of her biographer, Juliana died contemplating with a last outburst of love the Eucharistic Jesus, whom she had always loved, honored and adored.

Corpus Domini and Pope Urban IV
Won over also to the good cause of the feast of Corpus Domini was Giacomo Pantaleon of Troyes, who had known the saint during his ministry as archdeacon in Liege. He, in fact, having become Pope in 1264 and taking the name Urban IV, instituted the solemnity of Corpus Domini as a feast of obligation for the universal Church, the Thursday after Pentecost. In the Bull of institution, titled “Transiturus de hoc mundo” (Aug. 11, 1264), Pope Urban also re-evoked with discretion the mystical experiences of Juliana, giving value to their authenticity. He wrote: “Although the Eucharist is celebrated solemnly every day, we hold it right that, at least once a year, there be a more honored and solemn memoria of it. The other things, in fact, of which we make memoria, we do so with the spirit and with the mind, but we do not obtain, because of this, their real presence. On the other hand, in this sacramental commemoration of Christ, Jesus Christ is present with us in his substance, even if under another form. In fact, while he was about to ascend to heaven he said: “And lo, I am with you always, to the close of the age” (Matthew 28:20).

Miracle of Bolsena
The Pontiff himself wished to give an example, celebrating the solemnity of Corpus Domini in Orvieto, the city where he then dwelled. By his order, in fact, the famous corporal with the traces of the Eucharistic miracle that happened the previous year, in 1263, in Bolsena, is the kept in the cathedral of the city — and it is still kept there. [The miracle was this:] While a priest consecrated the bread and the wine, he was prey to strong doubts about the real presence of the Body and Blood of Christ in the sacrament of the Eucharist. Miraculously some drops of blood began to spurt from the consecrated Host, confirming in that way what our faith professes. Urban IV asked one of the greatest theologians of history, St. Thomas Aquinas — who at that time was accompanying the Pope and was in Orvieto — to compose texts of the liturgical office for this great feast. These are masterpieces in which theology and poetry fuse, still in use today in the Church. They are texts that make the cords of the heart vibrate to express praise and gratitude to the Most Holy Sacrament, while the intelligence, penetrating the mystery with wonder, recognizes in the Eucharist the living and true presence of Jesus, of his sacrifice of love that reconciles us with the Father, and gives us salvation.

Even if after the death of Urban IV the celebration of the feast of Corpus Domini was limited to some regions of France, Germany, Hungary and northern Italy, it was again a Pontiff, John XXII, who in 1317 revived it for the whole Church. Henceforth the feast experienced a wonderful development, and is still much appreciated by the Christian people.

A Eucharistic Springtime
I would like to affirm with joy that today in the Church there is a “Eucharistic springtime”: How many persons pause silently before the Tabernacle to spend time in a conversation of love with Jesus! It is consoling to know that not a few groups of young people have rediscovered the beauty of praying in adoration before the Most Blessed Sacrament. I am thinking, for example, of our Eucharistic adoration in Hyde Park, in London.

An Inexhaustible Source of Holiness
I pray so that this Eucharistic “springtime” will spread increasingly in every parish, in particular in Belgium, the homeland of St. Juliana. The Venerable John Paul II, in the encyclical “Ecclesia de Eucharistia,” said: “In many places, adoration of the Blessed Sacrament is also an important daily practice and becomes an inexhaustible source of holiness. The devout participation of the faithful in the Eucharistic procession on the Solemnity of the Body and Blood of Christ is a grace from the Lord which yearly brings joy to those who take part in it. Other positive signs of Eucharistic faith and love might also be mentioned” (No. 10).

Through Our Gazing in Adoration
Dear friends, fidelity to the encounter with the Eucharistic Christ in Sunday’s Holy Mass is essential for the journey of faith, but let us try as well to frequently go to visit the Lord present in the Tabernacle! Gazing in adoration at the consecrated Host, we discover the gift of the love of God, we discover the passion and the cross of Jesus, and also his Resurrection. Precisely through our gazing in adoration, the Lord draws us to himself, into his mystery, to transform us as he transforms the bread and wine. The saints always found strength, consolation and joy in the Eucharistic encounter. With the words of the Eucharistic hymn “Adoro te devote,” let us repeat before the Lord, present in the Most Blessed Sacrament: “Make me believe ever more in You, that in You I may have hope, that I may love You!” Thank you.