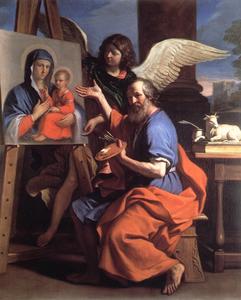 But there is more. According to tradition, Saint Luke was an iconographer. I very much like this painting of Luke painting! He seems to have just completed his image of the Virgin Mother with the Infant Christ. An Angel looks on approvingly. Could it be Saint Gabriel, the Archangel who figures so prominently in the first chapters of Saint Luke’s Gospel? The Evangelist is showing us his painting and inviting us to contemplate the Mother and the Child. The Rosary is just that: a contemplation of the Face of Christ and of the Mother who presents Him to the eyes of the soul.

I was very happy to receive Steven’s comment today on the Rosary and the difficulties it sometimes presents, even to folks who are well along in the ways of prayer. The Rosary grows with the one who prays it. It is like the manna in the desert that accomodated itself to the taste of each one. There are seasons in each man’s life with God and one’s way of praying the Rosary changes with these seasons. The Rosary is especially valuable in times of dryness; it becomes a way of inviting Mary into one’s desert.

One should not fall into the trap of perfectionism in praying the Rosary. It is a very simple prayer; don’t complicate it. Begin the Rosary with a deliberate Sign of the Cross and then set about praying it rather roundly! The Rosary has a rhythm. It is a sturdy prayer. There is a certain wisdom in simply “telling one’s beads.” It is sufficient to recall the mystery at the beginning of each decade. Saint Louis Marie de Montfort recommends the formulation of a specific petition as well. A very good thing.

It is also a good thing, from time to time, to refresh one’s contact with the Scriptural sources of the Rosary. For this I highly recommend that little treasure of a book , The Scriptural Rosary. In solitary recitation one need not read each passage of Scripture aloud. It is quite sufficient to glance at the text while praying the corresponding Ave.
One may also want, at certain moments, to give one’s solitary prayer of the Rosary something of the colour of the liturgical season or feast by repeating antiphons from the Divine Office at the beginning of each decade or by glancing at the Lectionary. This is not, of course, necessary, and for people who tend to accessorize their devotions and endlessly decorate their prayers with spiritual nosegays, it is better to stick with a certain austere simplicity. It is imprudent to overlay the Rosary with other devotions; this can be a trick of the devil to bring about spiritual fatigue and throw one into a crisis.

One should not weave a web of complications around the Rosary. It is exquisite in its poverty, and pleasing to the Mother of God in its simplicity. It is the prayer for all of life’s hours, especially for those darkened by suffering, loneliness, sickness, or death.