Skip to content
HomeDivine OfficeHe shall drink of the torrent in the way (XVIII:3) 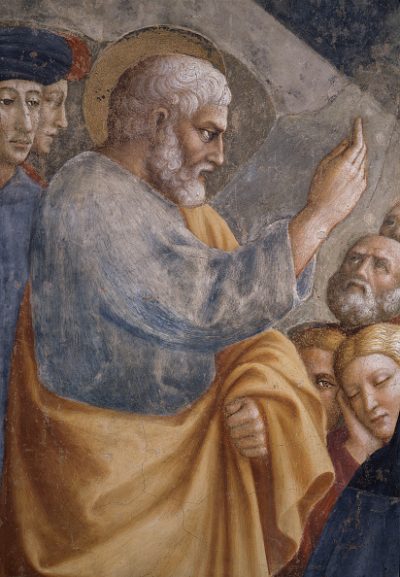 Saint Benedict begins the weekly cycle of Vespers psalms with Psalm 109 on Sunday evening. Psalm 109, a mysterious revelation of Christ as Priest and King, holds a place of choice in our traditional Benedictine cursus of the Psalter.

When Our Lord Jesus Christ looked into the psalms, He saw His own face as in a mirror. “All things must needs be fulfilled, which are written in the law of Moses, and in the prophets, and in the psalms, concerning me” (Luke 24:44). So too, does His Spouse, the Church see the Face of Christ, her Bridegroom, her King, and her Priest in the psalms. Jesus quotes Psalm 109, saying, “David himself, inspired by the Holy Spirit, declared, ‘The Lord said to my Lord, Sit at my right hand, till I put thy enemies under thy feet.’ David himself calls him Lord; so how is he his son?” (Mark 12:36). An allusion to the same Psalm 109 recurs at the very end of Saint Mark’s gospel: “So then the Lord Jesus, after he had spoken to them, was taken up into heaven, and sat down at the right hand of God” (Mark 16:19).

From the time of the Apostles, Psalm 109 has been a mirror wherein the Church contemplates the mystery of Christ in His suffering and triumph. The Church, in her sacred liturgy, holds fast to the understanding of Psalm 109 that Our Lord passed on to the Apostles. Deep in her collective memory the Church cherishes the incomparable seventh mode antiphon that, for centuries, has opened the evening sacrifice of praise on Sunday: Dixit Dominus Domino meo: Dede a dextris meis (Psalm 109:1). She hears the voice of Christ repeating for her what the Father said to Him on the day of resurrection: “Sit at my right” (Psalm 109:1).

The medieval monastic Psalters place a Christological title at the beginning of each psalm. These old titles of the psalms—there are many series of them—say, in some way, “Here is the mystery of Christ in this psalm. Contemplate His Face as in a mirror, and hear in this psalm the sound of His voice”. One ancient series of psalm titles has this for Psalm 109: “Of the divinity, the humanity, the kingship, and the priesthood of Christ”.

Going through the psalm, verse by verse, we see in verse 1 Christ enthroned at the right hand of the Father, an image that recurs in the Gloria of the Mass and in the Te Deum. Verse 2 describes the triumph of Christ the King. In verse 3 we hear the voice of the Father saying, “From the womb before the daystar I begot thee” (Psalm 109:3). Verse 4 is the declaration of Christ’s eternal priesthood: “Thou art a priest forever according to the order of Melchisedech” (Psalm 109:4). Verses 5 and 6 describe the triumph of Christ over the powers of death. In the last verse of the psalm the whole mystery of Christ’s passion, death, and resurrection is summed up: “He shall drink of the torrent in the way—the torrent of His bitter sufferings—therefore He shall lift up his head—in the glory of the resurrection and ascension” (Psalm 109:7).

How does all of this relate to our life? When we begin to see the Face of Christ in the psalms as in a mirror, we can begin to relate them to our own monastic journey as well. We are all of us called, in some way, to “drink of the torrent [of humiliation and suffering] in the way” (Psalm 109:7). We had this morning at Matins a magnificent text of Saint Peter Damian:

For God’s chosen ones there is great comfort; the torment lasts but a short time. Then God bends down, cradles the fallen figure, whispers words of consolation. With hope in his heart, man picks himself up and walks again towards the glory of happiness in heaven. . . . Therefore, my brother, scorned as you are by men, lashed as it were by God, do not despair. Do not be depressed. Do not let your weakness make you impatient. Instead, let the serenity of your spirit shine through your face. Let the joy of your mind burst forth. Let words of thanks break from your lips.

The way that God deals with men can only be praised. He lashes them in this life to shield them from the eternal lash in the next. He pins people down now; at a later time he will raise them up. He cuts them before healing; he throws them down to raise them anew. (From a Letter of Saint Peter Damian)

Our indefectible hope is that, like Christ and with him, we too shall “lift up our heads”. All that the Father said to Christ is also spoken to us. All that was accomplished in Christ our Head must fulfilled in his Body and in each of his members. And so the psalms of David, the psalms of Christ, mark the rhythm of our life in Christ, hour by hour, day by day, and week after week.