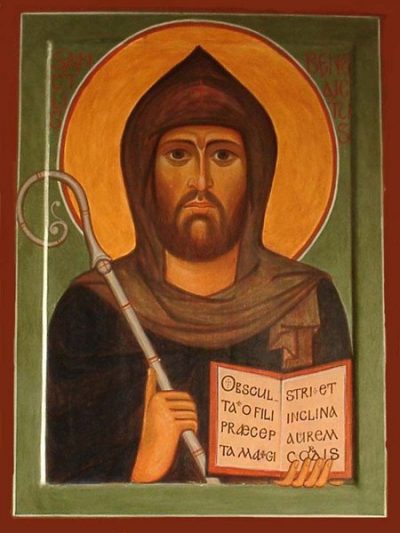 Let the Abbot be ever mindful that at the dreadful judgment of God an account will have to be given both of his own teaching and of the obedience of his disciples. And let him know that to the fault of the shepherd shall be imputed any lack of profit which the father of the household may find in his sheep. Only then shall he be acquitted, if he shall have bestowed all pastoral diligence on his unquiet and disobedient flock, and employed all his care to amend their corrupt manner of life: then shall he be absolved in the judgment of the Lord, and may say to the Lord with the Prophet: “I have not hidden Thy justice in my heart, I have declared Thy truth and Thy salvation, but they contemned and despised me.” And then at length the punishment of death shall be inflicted on the disobedient sheep.

Saint Benedict here enjoins the abbot to practice what he will propose to all his monks in Chapter IV:

44. To fear the Day of Judgment.
45. To be in dread of hell.
46. To desire with a special longing everlasting life.
47. To keep death daily before one’s eyes.
48. To keep guard at all times over the actions of one’s life.

At the dreadful judgment of God, so poignantly described in the Dies Irae, the sequence of the Requiem Mass, the abbot will have to give an account of his own teaching and of the obedience of his disciples.

Then shall with universal dread
the Book of Consciences be read
to judge the lives of all the dead.

For now before the Judge severe
all hidden things must plain appear;
no crime can pass unpunished here.

O what shall I, so guilty plead?
and who for me will intercede?
when even Saints shall comfort need?*

An abbot whose mind is darkened by error risks leading his whole community over a precipice. Our Lord says, “When one blind man leads another, they will fall into the ditch together” (Matthew 15:14). For example, if the abbot thinks like an Arian and teaches like an Arian, the whole community risks falling into Arianism. The same thing can be said of any of the heresies and “isms” that corrupt the purity of the faith today. I recall that magnificent homily of Joseph Cardinal Ratzinger on April 18, 2005:

How many winds of doctrine have we known in recent decades, how many ideological currents, how many ways of thinking. The small boat of the thought of many Christians has often been tossed about by these waves – flung from one extreme to another: from Marxism to liberalism, even to libertinism; from collectivism to radical individualism; from atheism to a vague religious mysticism; from agnosticism to syncretism and so forth. Every day new sects spring up, and what St Paul says about human deception and the trickery that strives to entice people into error (cf. Ephesians 4: 14) comes true.

Today, having a clear faith based on the Creed of the Church is often labeled as fundamentalism. Whereas relativism, that is, letting oneself be “tossed here and there, carried about by every wind of doctrine”, seems the only attitude that can cope with modern times. We are building a dictatorship of relativism that does not recognize anything as definitive and whose ultimate goal consists solely of one’s own ego and desires.

Do not think for a minute that the monastic enclosure is a guaranteed protection against all that Cardinal Ratzinger described eleven years ago. At the end of the day, the abbot is responsible for the transmission of the truth to his sons.  The abbot, himself a son of tradition, serves his community as the guardian of tradition.

The abbot is bound to do all in his power to transmit to his sons the purity of the faith in all its splendour, to keep watch over his tongue and, in his teaching, to refer always to the integral lex orandi of the Church. If having done this, certain of his sons, turn a deaf ear to their abbot’s teaching, spurn his instruction, and resist his fatherly corrections, then shall the abbot be absolved in the judgment of the Lord, while his unquiet and disobedient sons fall under the fearsome judgement of Christ.

We live in strange times. The winds of deceit and confusion that have blown through the Church in every age seem, in our day, to have become a sandstorm, blinding many with the irritants of countless grains of untruth. An abbot, like any other superior or spiritual father in the Church, must take to heart the sobering admonitions of Saint Paul to Timothy:

It is for thee, Timothy, to keep safe what has been entrusted to thee, avoiding these new, intruding forms of speech, this quibbling knowledge that is knowledge only in name; there are those who profess them, and in professing them have shot wide of the mark which faith sets us. (1 Timothy 6:20–21)

Take heed to thyself and to doctrine: be earnest in them. For in doing this thou shalt both save thyself and them that hear thee. (1 Timothy 4:16)