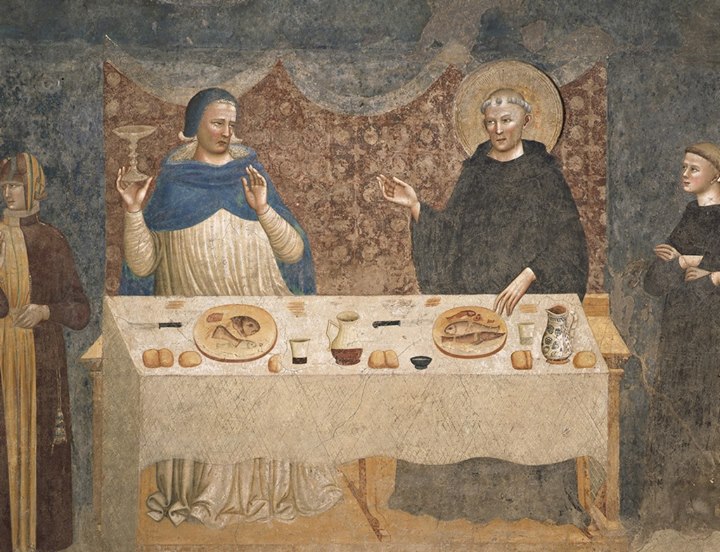 CHAPTER LI. Of the Brethren who go not very far off
2 Apr. 2 Aug. 2 Dec.
Let not the brother who is sent out on any business, and hopeth to return that same day to the Monastery, presume to eat while abroad, even although pressed by any one to do so, unless perchance he have been bidden by his Abbot. If he do otherwise, let him be excommunicated.

Saint Benedict admits that his monks may be sent out to transact business on behalf of the monastery. A monk does not go out of the monastery by his own initiative. A monk is always sent out. Kneeling, he asks the blessing of the abbot before leaving the monastery; in the same way, he asks the blessing of the abbot upon his return. There is no question of a monk laying aside the monastic habit in favour of secular attire when sent out on errands. While some errands can be completed in a single day, other business requires remaining outside the monastery overnight.

In Chapter L, Saint Benedict enjoined his monks who are at work at a great distance, or on a journey, and cannot come to the oratory at the proper time (the Abbot judging such to be the case) not to allow the appointed Hours of the Divine Office to pass by. Rather, monks sent out to work or away on an errand are to mark, as best they can, the Hours of the Divine Office. At no time does a monk cease being a monk, nor more than a husband ceases being a husband, or a father a father. A monk is never on holiday, he never goes off–duty. He is, always and everywhere, the man of the Opus Dei. He makes his own the words of Jesus, “How is it that you sought me? did you not know, that I must be about my father’s business?” (Luke 2:49).

Monks sent out for a few hours on business are not to presume to accept invitations to take a meal with seculars. The sharing of a meal is a significant action; it is an investment of time and the expression of a relationship. The notions of “fast food” or of “grabbing a bite to eat” are completely foreign to the ethos of the Holy Rule. In Saint Benedict’s day, no less than in Mediterranean culture today, a meal creates social bonds and, in some way, consecrates a relationship. Saint Benedict wants his monks, always and everywhere, “to keep aloof from worldly actions” (Chapter IV). Chapter XII of the Second Book of the Dialogues sheds light on the dispositions of the Holy Rule:

Among other miracles which the man of God did, he began also to be famous for the spirit of prophecy: as to foretell what was to happen, and to relate to them that were present, such things as were done in absence. The order of his abbey was, that when the monks went abroad (to deliver any message) never to eat or drink anything out of their cloister: and this being diligently observed, according to the prescription of their rule, on a certain day some of the monks went forth on such business: and being enforced about the dispatch thereof to tarry somewhat long abroad, it fell so out that they stayed at the house of a religious woman, where they ate and refreshed themselves. And being late before they came back to the abbey, they went as the manner was, and asked their father’s blessing: of whom he demanded where they had eaten: and they said nowhere. “Why do you,” said he, “tell an untruth? for did you not go into such a woman’s house? and eat such and such kind of meat, and drink so many cups?” When they heard him recount so in particular, both where they had stayed, what kind of meat they had eaten, and how often they had drunk, and perceived well that he knew all whatsoever they had done, they fell down trembling at his feet, and confessed that they had done wickedly: who immediately pardoned them for that fault, persuading himself that they would not any more in his absence presume to do any such thing, seeing they now perceived that he was present with them in spirit.

In the matter of eating and drinking outside the monastery, as in all things, a monk will follow his abbot’s bidding. Saint Benedict recognises that, in certain circumstances, there may be good reasons why a monk should accept the invitation to share a meal outside the monastery, but this remains exceptional and, always, subject to the abbot’s discretion. This chapter must be read in the light of other parts of the Holy Rule in which Saint Benedict shows his solicitude for the reader at table and the servants of the refectory.

Let the weekly servers take each a cup of drink and a piece of bread over and above the refection, that so they may serve their brethren, when the hour cometh, without murmuring or great labour. (Chapter XXV)

Let the brother who is reader for the week take a little bread and wine before he begin to read, on account of the Holy Communion, and lest it be hard for him to fast so long. (Chapter XXXVIII)

The brother who is outside the monastery may need a little refreshment lest he grow faint while carrying out his errand or return to the monastery in a state of weakness. The abbot may authorise a brother to stop for a cup of coffee or, as sometimes happens when a brother is sent to Drogheda, to have a cup of tea with the curate. What Saint Benedict opposes is a monk’s becoming involved in the social ritual of a prolonged meal and in the relationships and obligations that a monk implicitly contracts by partaking in such a meal. Such an action violates the enclosure that is the safeguard of the monastic κοινωνία.

The only case in which a monk may accept an invitation to partake of a meal outside the monastery is one in which the abbot has ordered him to do so or given permission for it. It is the blessing of the abbot that changes everything. Once the abbot has authorised a meal outside the monastery it becomes, by virtue of the abbot’s blessing, not a violation of the κοινωνία of the monastic table, but something in which the monastic family participates. The brother takes his place at the table of his host, not as an isolated individual, but as the ambassador of the abbot and of the whole monastic family. The blessing of the abbot touches not only the monk who is invited to table, but also the host who invites him; the abbot’s blessing enlarges the circle of the monastic κοινωνία to include both the monk who is invited and the host who invites him.

Therefore, whether you eat or drink, or whatsoever else you do, do all to the glory of God. (1 Corinthians 10:31)