Skip to content
HomeBlessed Virgin MaryAcceptable to God and sweet to men (V:2) 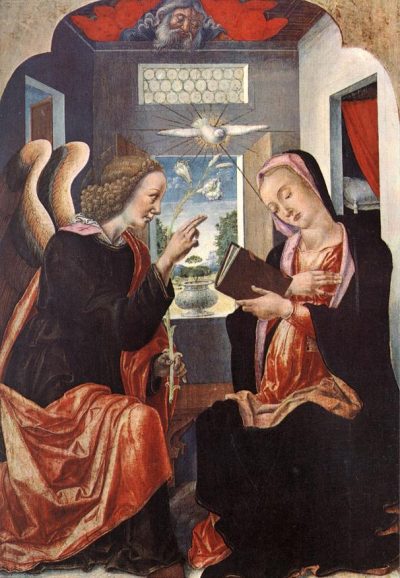 23 Jan. 24 May. 23 Sept. But this very obedience will then only be acceptable to God and sweet to men, if what is commanded be done not fearfully, tardily, nor coldly, nor with murmuring, nor with an answer shewing unwillingness; for the obedience which is given to superiors is given to God, since He Himself hath said: “He that heareth you, heareth Me.” And it ought to be given by disciples with a good will, because “God loveth a cheerful giver.” For if the disciple obey with ill-will, and murmur not only with his lips but even in his heart, although he fulfil the command, yet it will not be accepted by God, Who regardeth the heart of the murmurer. And for such an action he shall gain no reward; nay, rather, he shall incur the punishment due to murmurers, unless he amend and make satisfaction.

In accordance with this design, Mary the Virgin is found obedient, saying, “Behold the handmaid of the Lord; be it unto me according to your word.” But Eve was disobedient; for she did not obey when as yet she was a virgin. . . . The knot of Eve’s disobedience was loosed by the obedience of Mary for what the virgin Eve had bound fast through unbelief, this did the Virgin Mary set free through faith. (Saint Irenaeus of Lyons, Against Heresies, III:4)

The monk who prays the Rosary discovers that, in each of the Joyful Mysteries, the obedience of the Blessed Virgin Mary is acceptable to God and sweet to men; the Rosary thus becomes a school of monastic obedience. With each successive Ave, something of the grace of Our Lady’s obedience slowly and almost imperceptibly penetrates the soul; the monk who perseveres in  telling his beads will find that he no longer shrinks from the things that obedience may lay upon him. Things once hard and bitter will become sweet. If you pray to the Mother of God, she will lead you to her Son to hear him say:

Take up my yoke upon you, and learn of me, because I am meek, and humble of heart: and you shall find rest to your souls. For my yoke is sweet and my burden light. (Matthew 11:29–30)

In the obedience of the Blessed Virgin Mary there was nothing fearful, nothing tardy, nothing cold. Her Immaculate Heart harboured no murmuring. Never did she respond unwillingly to the plan of God as it unfolded in her life. The Immaculate Conception was always a pure “Yes”to God. To souls who open themselves to her maternal influence, Mary communicates a humble participation in her pure “Yes” to God.

I have, in my own long experience, seen more than a few monks descend into a kind of acedia. I have known monks in the grip of despondency, or unable to emerge from a terrible weariness, or beset by persistent temptations to say “No” to everything the monastic life offers when, in the deepest place of their heart, all they wanted was to be able to say “Yes”. The dilemma is not unlike that of the Apostle who says:

My own actions bewilder me; what I do is not what I wish to do, but something which I hate. Why then, if what I do is something I have no wish to do, I thereby admit that the law is worthy of all honour; meanwhile, my action does not come from me, but from the sinful principle that dwells in me. Of this I am certain, that no principle of good dwells in me, that is, in my natural self; praiseworthy intentions are always ready to hand, but I cannot find my way to the performance of them; it is not the good my will prefers, but the evil my will disapproves, that I find myself doing. And if what I do is something I have not the will to do, it cannot be I that bring it about, it must be the sinful principle that dwells in me. This, then, is what I find about the law, that evil is close at my side, when my will is to do what is praiseworthy. Inwardly, I applaud God’s disposition, but I observe another disposition in my lower self, which raises war against the disposition of my conscience, and so I am handed over as a captive to that disposition towards sin which my lower self contains. Pitiable creature that I am, who is to set me free from a nature thus doomed to death? Nothing else than the grace of God, through Jesus Christ our Lord. (Romans 7:15–25, Knox Translation)

The Apostle was talking about obedience to the Law; I am talking about obedience to the Rule and the abbot. The underlying conflict and the resultant distress are, nonetheless, the same. In both instances, there is but one way out; it is, as the Apostle says, “Nothing else than the grace of God, through Jesus Christ our Lord” (Romans 7:25). The man in the grip of such a suffering must be treated always with compassion and respect. The cure may require a long convalescence, but before the cure, there must be a careful diagnosis of the ailment. The onset of such a spiritual pathology is marked by certain symptoms. In nearly every instance there is, before anything else, a falling away from prayer. Where there is little prayer, there will be little grace. Sometimes a man must begin not by praying, but by praying for the grace of the desire to pray. The monk who is disaffected from prayer will become disenchanted with everything else.

I have, in the course of my own monastic journey, known some disobedient monks, but I have not yet met the monk who wanted to be disobedient. A monk stumbles first in his thoughts — out of weakness, weariness, or the peculiar spiritual blindness that pride and certain other sins can cause — and then he falls into patterns of disobedience and chronic acedia. Even in the worst cases, however, when a brother is utterly paralysed by acedia, there remains, I am convinced, buried beneath the ashes of his heart, a little glowing ember. From this ember can come a spark capable of re–igniting the original blaze of the vocation. You know the story of Abba Lot:

Abba Lot went to Abba Joseph and said to him, “Abba, as far as I can I say my little office, I fast a little, I pray and meditate, I live in peace as far as I can, I purify my thoughts. What else can I do?” Then the old man stood up and stretched his hands toward heaven. His fingers became like ten lamps of fire and he said to him, “If you will, you can become all flame.”

The monastic vocation is to continue in the Church the grace that Saint John the Baptist received, while still in his mother’s womb, through the mediation of the Blessed Virgin Mary. Our Lord says of John: Ille erat lucerna ardens et lucens, “He was a burning and a shining light” (John 5:35). There is no heart so dark and cold that it cannot be rekindled by contact with the Blessed Virgin Mary and, through her, with Jesus, the blessed fruit of her womb. This is why I recommend the Rosary to brothers afflicted by acedia, or no longer in their first fervour, or who find themselves affected by a kind of spiritual chill. The repetition of the Aves is like striking a stone with flint to enkindle a fire. A series of sparks are often needed before one succeeds in producing a flame. I am not saying that other forms of repetitive prayer are not effective; I am saying only that, in my experience, nothing has ever been as effective as the Rosary for the recovery of fire and light.

Obedience with a good will, the obedience of the cheerful giver dear to God, comes easily to one in whose heart burns the fire of love. Every day since Pentecost Sunday we have sung: Veni Sancte Spiritus, reple tuorum corda fidelium: et tui amoris in eis ignem accende, “Come Holy Ghost, fill the hearts of Thy faithful; and kindle in them the fire of Thy love”. The Rosary is another way, a very humble way, of saying the same thing and of asking for the same grace. Every appeal to Mary implicitly calls down the Holy Ghost. If you would learn the secret of an obedience acceptable to God and sweet to men, pray and pray much to the Mother of God. Strike the flint until you see the spark. As Abba Joseph said to Abba Lot, “If you will, you can become all flame”.