Skip to content
HomeMonasticWhere he is to meditate and study (LVIII:5) 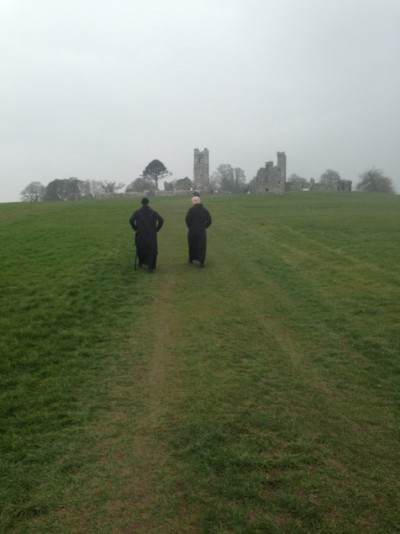 CHAPTER LVIII. Of the Discipline of receiving Brethren into Religion
11 Apr. 11 Aug. 11 Dec.
To him that newly cometh to change his life, let not an easy entrance be granted, but, as the Apostle saith, “Try the spirits if they be of God.” If, therefore, he that cometh persevere in knocking, and after four or five days seem patiently to endure the wrongs done to him and the difficulty made about his coming in, and to persist in his petition, let entrance be granted him, and let him be in the guest-house for a few days. Afterwards let him go into the Novitiate, where he is to meditate and study, to take his meals and to sleep. Let a senior, one who is skilled in gaining souls, be appointed over him to watch him with the utmost care, and to see whether he is truly seeking God, and is fervent in the Work of God, in obedience and in humiliations. Let all the hard and rugged paths by which we walk towards God be set before him.

Wisely, Saint Benedict prescribes that the man newly come to change his life should be received in the guesthouse for a few days. The door of the enclosure is not thrown open to welcome him. Rather, he is kept outside the enclosure under the watchful eye of the guestmaster. Not infrequently, it becomes clear that an enquirer, already at this early stage, gives evidence of unsuitability for the monastic life. The abbot may ask one or another of the seniors to meet with the enquirer and, afterwards, to relate to him their impressions of the man. The guestmaster will observe if the enquirer ambushes other guests to chat to them, or if he is late in arriving at the Divine Office, or if he leaves unwashed crockery in the guesthouse kitchen, or if he is addicted to the telephone, or clandestinely popping into the village for a pint. The enquirer may be asked to participate in some manual work. This gives the brother in charge of work an opportunity to observe whether or not he is punctual, and whether or not he can follow directions. If he is tardy, or a dawdler, or anti-social, or desperate for affirmation, or a chatterbox, these liabilities will, generally, manifest themselves at work. The guesthouse serves as a point of triage. It is far better to eliminate an enquirer from further pursuit of the vocation at this stage than at some later one.

Once a man is brought into the noviciate, the monastic journey may begin in earnest. Saint Benedict foresees that the noviciate is a place apart; he calls it a cella, that is a separate dwelling. What does the newly–come man do there? Saint Benedict mentions four things: he is to meditate and study, to take his meals and to sleep. The general practice has long been for postulants and novices to take their meals in the common refectory, albeit at a  separate table or, at least, in designated places according to seniority. In the Holy Rule, meditation means the repetition of texts from Sacred Scripture and from the Opus Dei, with a view to learning them, and this in four ways. First, a postulant must learn how to find the Office and Mass of the Day, and how to find passages in the Bible. Second, he must learn to read the Latin text, how to pronounce it, and how to grasp its meaning, either by making use of translation, or by working his way through each psalm, verse by verse, Saint Benedict’s meditatio is ordered to the worthy celebration of the Opus Dei; it has a liturgical finality. The postulant must also learn to study in a monastic way. He may have to let go of all the notions of study acquired during his schooling in order to enter into “the love of letters and the desire for God.” He will learn that, for a monk, study springs from a desire to know God, to love Him, and to praise Him. Right from the beginning, a brother’s reading will be directed and monitored by the Father in charge of him.

Saint Benedict also intends that new–comers should sleep in the noviciate. This practice is still followed, insofar as possible, here and in most other monasteries. The arrangement gives the Father in charge of the noviciate an opportunity to assess a man’s ability to go to sleep at the prescribed hour and to rise promptly at the sound of the bell. A man who cannot go to bed and rise on time will struggle getting through the rest of the day. A monastic vocation is tested in the details of ordinary life. Theoretical knowledge and a dreamy idealism will not stand the test of the humble quotidian.