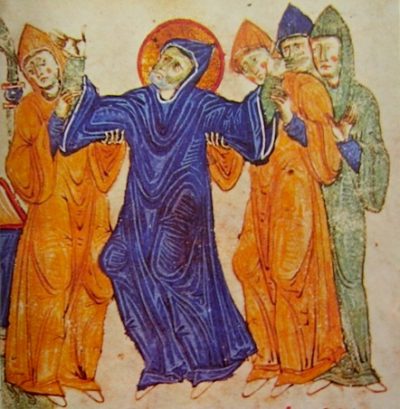 CHAPTER XLII. That no one may speak after Compline
21 Mar. 21 July. 20 Nov.
Monks should love silence at all times, but especially during the hours of the night. Therefore, on all days, whether of fasting or otherwise, let them sit down all together as soon as they have risen from supper (if it be not a fast-day) and let one of them read the Conferences [of Cassian], or the lives of the Fathers, or some thing else which may edify the hearers. Not, however, Heptateuch, nor the Books of Kings for it will not profit those of weak understanding to hear those parts of Scripture at that hour: they may, however, be read at other times. If it be a fast-day, then a short time after Vespers let them assemble for the reading of the Conferences, as we have said; four or five pages being read, or as much as time alloweth, so that during the reading all may gather together, even those who may have been occupied in some work enjoined them. Everyone, then, being assembled, let them say Compline; and when that is finished, let none be allowed to speak to any one. And if any one be found to evade this rule of silence, let him be subjected to severe punishment; unless the presence of guests should make it necessary, or the Abbot should chance to give any command. Yet, even then, let it be done with the utmost gravity and moderation.

On this feast of the Transitus of Our Father Saint Benedict, he speaks to us, saying: Omni tempore silentium debent studere monachi.  At all times monks ought to desire silence. Mother Mectilde saw the Transitus of Saint Benedict, as recounted by Saint Gregory, as the mysterious conception of those sons and daughters of his who would, in the course of time, spend their lives as Saint Benedict lived his death, that is, facing the altar. She writes:

But I glimpse the reason of the mystery of this choice and of the election that God has made of the children of this great Patriarch, and for this I am not at all astonished; because, although there is something incomprehensible, hidden, and profound in the state [of life] that this glorious Patriarch brought to the earth, and that he inspired in his sons, we see that it has so great a relation to the Divine Eucharist, that I cannot but say that it is the portion and heritage of the religious of Saint Benedict. I should, rather, be astonished that it took the passage of so many centuries before the children of this Blessed Father quickened themselves to enter into possession of the inestimable treasure that the infinite bounty of God held in reserve for them.

If you ask me . . . where I get that which I have just said, I dare assure you that it is a secret which was shown me in the death of our most illustrious Patriarch, who, wanting to witness to to the love he had for the Most Holy Sacrament of the Altar, could do it no better than by expiring in His Holy Presence, thereby rendering the last breaths of his heart to this adorable Host, and enclosing his sentiments in the sacred ciborium, so as to produce, in time, children of His Order who would, until the end of the world, offer the adorable Host adoration, respect, and the bounden duties of continual love and reparation.

One cannot abide in adoration before the Host without being drawn into the silence of the Host. There are three kinds of silence in the life of a monk: the first is ascetical; the second is useful; and third is contemplative. By the first, a monk seeks to avoid sins of the tongue and the occasions of such sin. By the second, a monk practices silence as the means to a worthy end; as when, for example, one is silent in order to stay focused on one’s work, to study with application, or to prepare oneself for lectio divina and for prayer. By the third, one is silent because the presence of God reduces one to silence, that is, to the silence that is the soul’s expression of adoration, of yearning for God, and of repose in His love. The third kind of silence is best learned in the school of the Host.

It is the silence of the Host that opens a soul to dialogue with the Word. Even then, the words by which it may please the Word to reveal something of Himself are as nothing compared to the vastness of the silence in which He communicates His love. The words that may be exchanged in adoration are, on the part of God, divinely simple and efficacious — sed tantum dic verbo, “but only say the word” (Matthew 8:8). On the part of the soul they are mere stammerings; Et dixi: A, a, a, Domine Deus, ecce nescio loqui, quia puer ego sum. “And I said: Ah, ah, ah, Lord God: behold, I cannot speak, for I am a child” (Jeremias 1:6)

All of these other things which Jesus did, and continues to do, are found in the silence of the Host. In a sense, the silence of adoration of the Most Blessed Sacrament begins precisely where the Gospel of Saint John ends.