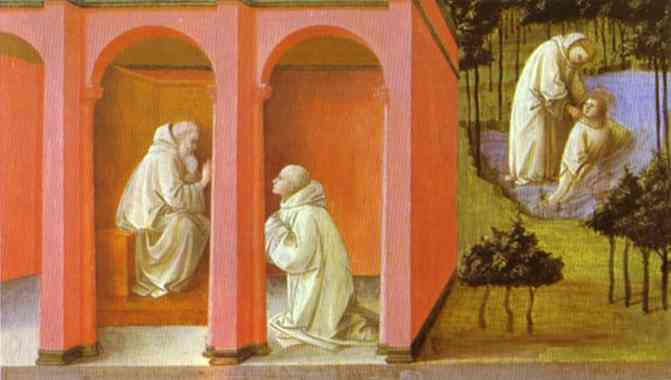 Not only is the excellence of obedience to be shewn by all to the Abbot, but the brethren must also obey one another, knowing that by this path of obedience they shall come unto God. The commands, then, of the Abbot or the Superiors appointed by him (to which we allow no private orders to be preferred) having the first place, let all the younger brethren obey their elders with all charity and vigilance. And should any one be found refractory, let him be corrected. But if a brother be rebuked by the Abbot, or any of his Superiors, for the slightest cause, or if he perceive that the mind of any Superior is even slightly angered or moved against him, however little, let him at once, without delay, cast himself on the ground at his feet, and there remain doing penance until that feeling be appeased, and he giveth him the blessing. If any one should disdain to do this, let him either be subjected to corporal chastisement, or, if he remain obdurate, let him be expelled from the Monastery.

Saint Benedict, returning to the subject of Chapter V (De Oboedientia) speaks today of the bonum oboedientiae, the boon of obedience that the brethren are to give not only to the abbot, but also to one another. Obedience characterises monastic life at every level. I have never forgotten the words of Saint John Paul II in the Apostolic Letter Orientale Lumen:

The starting point for the monk is the Word of God, a Word who calls, who invites, who personally summons, as happened to the Apostles. When a person is touched by the Word obedience is born, that is, the listening which changes life. (Orientale Lumen, art. 10)

This is monastic obedience: the listening which changes life. Dom Morin, in his little book [The Ideal of the Monastic Life Found in the Apostolic Age] shows that an attitude of obedience to the Apostles and to the brethren belongs to the original response to the preaching of the Gospel on the morning of Pentecost.

When they had heard these things, they had compunction in their heart, and said to Peter, and to the rest of the apostles: What shall we do, men and brethren? (Acts 2:37)

Once the Word of God has pierced one’s heart, one cannot go one’s own way, doing as one sees fit, and living by one’s own lights, without falling under the same judgment as the disobedient son in the Gospel parable.

A certain man had two sons; and coming to the first, he said: Son, go work to day in my vineyard. And he answering, said: I will not. But afterwards, being moved with repentance, he went. And coming to the other, he said in like manner. And he answering, said: I go, Sir; and he went not. Which of the two did the father’s will? They say to him: The first. Jesus saith to them: Amen I say to you, that the publicans and the harlots shall go into the kingdom of God before you. (Matthew 21:28–31)

Son of God though he was, he learned obedience in the school of suffering, and now, his full achievement reached, he wins eternal salvation for all those who render obedience to him. (Hebrews 5:8–9)

Saint Benedict would have “the younger brethren obey their elders with all charity and vigilance”. In our community, where you are all considered “younger brethren” there is, nonetheless, an obedience that you owe one to another. I speak here of obedience in little things, of not being stubborn, nor attached to one’s own views, nor proprietary of one’s own time, nor reluctant to accommodate another brother’s needs.

If a brother sees that his disobedience, or carelessness, or forgetfulness, has caused some kind of disorder or inconvenienced another, “let him at once, without delay, cast himself on the ground at his feet, and there remain doing penance until that feeling be appeased, and he giveth him the blessing”. This custom, recommended by Saint Benedict, is a very good one. One can see it practiced to this day among Eastern monks. We practice it as well among ourselves, modestly and soberly, always guided by common sense and by an understanding of what is appropriate to time and place. All such gestures participate in the great sacramental economy of the Incarnation and, as such, can help a monk to acquire inwardly what, with his body, he seeks to express outwardly.