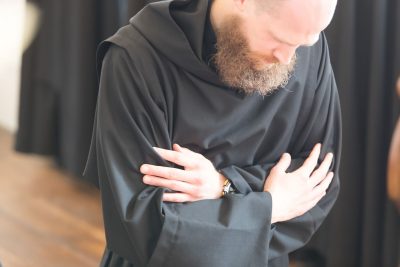 CHAPTER LIX. Of the Sons of Nobles or of Poor Men that are offered
13 Apr. 13 Aug. 13 Dec.
If any nobleman shall perchance offer his son to God in the Monastery, let the parents, should the boy be still in infancy, make for him the written promise as aforesaid; and together with the oblation* let them wrap that promise and the hand of the child in the altar-cloth and so offer him up. With respect to his property, they must in the same document promise under oath that they will never either themselves, or through any one else, or in any way whatever, give him anything, or the means of having anything. Or else, if they are unwilling to do this, and desire to offer something as an alms to the Monastery, for their own advantage, let them make a donation of whatever they please to the Monastery, reserving to themselves, if they will, the income thereof during their life. Thus let all possibility of expectation be excluded whereby the child might be deceived and so perish (which God forbid), as we have learnt by experience may happen. Let those who are poorer do in like manner. But those who have nothing whatever may simply make the promise in writing, and, with the oblation, offer their son before witnesses.

Although we no longer receive child oblates, this chapter is not without interest for us. The rite by which a boy becomes an oblate — literally, an offering made over to God — is akin to the profession of a monk. Once it is certain that the boy’s parents have renounced all claim over him, and will not seek to entice him out of the cloister back into the world by offering him an inheritance, the boy is led to the altar of the Oratory of the monastery.  There, the boy’s little hand is wrapped in the altar linen, the ample corporal upon which rest the oblata of bread and wine set apart for the Holy Sacrifice. The child, together with the offerings of the Mass, is made over to God in an irrevocable manner.

This rite is extremely important, not only for Oblates of all times and ages, but also for monks, because its casts a theological light over the mystic significance of monastic profession. As I explained yesterday, when a man “makes himself over to God” by monastic profession, he is identifying himself with the offering of bread and wine that will become, as the Roman Canon puts it, the hostia pura, hostia sancta, hostia immaculata, the pure victim, the holy victim, the spotless victim who offers Himself in sacrifice to the Father. Mother Mectilde de Bar’s emphasis on the monastic life as a state of victimhood is not, as some have contended, a marginal development in 17th century piety; it is, rather, deeply rooted in Saint Benedict’s own Eucharistic understanding of monastic profession. This, in fact, is what is meant by actual participation in the Holy Sacrifice of the Mass.

The teaching of Pope Pius XII on this very point is clear:

It is quite true that Christ is a priest; but He is a priest not for Himself but for us, when in the name of the whole human race He offers our prayers and religious homage to the eternal Father; He is also a victim and for us since He substitutes Himself for sinful man. Now the exhortation of the Apostle, “Let this mind be in you which was also in Christ Jesus,” requires that all Christians should possess, as far as is humanly possible, the same dispositions as those which the divine Redeemer had when He offered Himself in sacrifice: that is to say, they should in a humble attitude of mind, pay adoration, honor, praise and thanksgiving to the supreme majesty of God. Moreover, it means that they must assume to some extent the character of a victim, that they deny themselves as the Gospel commands, that freely and of their own accord they do penance and that each detests and satisfies for his sins. It means, in a word, that we must all undergo with Christ a mystical death on the cross so that we can apply to ourselves the words of St. Paul, “With Christ I am nailed to the cross.” (Mediator Dei, art. 81)

One who seeks to live in a state of oblation, that is, of victimhood, at every moment, will begin to understand that nothing in his life is foreign to the altar. Have I, by the grace of Christ, resisted a temptation? Have I overcome a selfish impulse? Have I kept silence when I could have spoken useless words? Have I offered the alms of a smile to a brother? Have I restrained my curiosity, curbed my irascibility, or quieted turbulent thoughts? All of these things must be brought to the altar. Everything becomes fuel for the holocaust, even one’s sins. Bring to the Holy Sacrifice of the Mass, bring to the Sacred Host hidden in the tabernacle or exposed in the monstrance all of the things, great and small, that have come into your life, lodged themselves in your memory, or left their impression in your imagination.

Thou hast set our iniquities before thy eyes: our life in the light of thy countenance. (Psalm 89:8)

Christ repairs all that we bring to him. When we appear before the Most Holy Sacrament, Christ sees in us the imprints or impressions of all who have touched our lives, affected us for good or for ill, over time or fleetingly. In the same way, He sees in us all whom we have touched, or affected for good or for ill, over time or fleetingly. No one who has touched us and no one whom we have touched is hidden from the gaze of Christ. By bringing ourselves and our history to the altar, we submit to the work of Christ the Reparator and become co–repairers with Him. How many lives have been repaired because one man went to the altar to make himself over to Christ together with all the persons and events that have left an impression, a kind of finger print, on his soul?