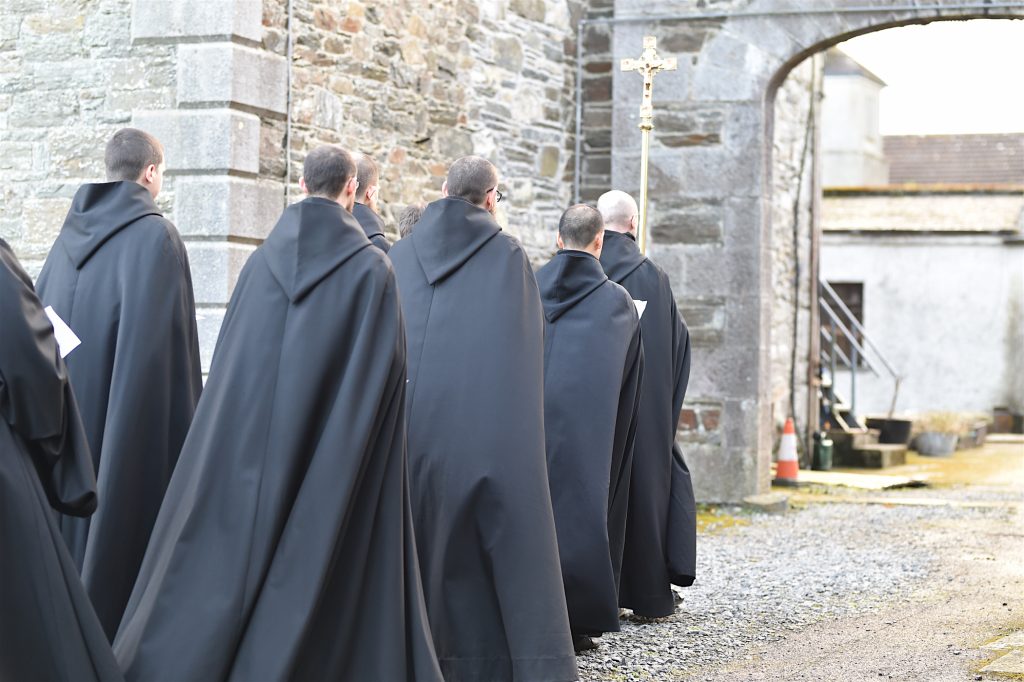 CHAPTER XXI. Of the Deans of the Monastery
26 Feb. 28 June. 28 Oct.
Should the community be large, let there be chosen from it certain brethren of good repute and holy life, and appointed Deans. Let them carefully direct their deaneries in all things according to the commandments of God and the will of their Abbot. And let such men be chosen Deans as the Abbot may safely trust to share his burdens: let them not be chosen according to order, but for the merit of their lives and for their wisdom and learning. And should any one of them, being puffed up with pride, be found worthy of blame, and after being thrice corrected, refuse to amend, let him be deposed, and one who is worthy be put in his place. And we order the same to be done with regard to the Prior.

We enter today into a third section of the Holy Rule; it treats of life in the monastery and so, in some way, corresponds to the Acts of the Apostles. We can begin to see that the Holy Rule presents the monastic life as (1) a participation in the Passion, Death, and Burial of Christ (Chapters V, VI, and VII on obedience, silence, and humility); (2) a participation in the glorious priesthood of the risen and ascended Christ, who stands before the Father, beyond the veil, in the heavenly Holy of Holies (Chapters VIII—XX on the Opus Dei); (3) the continuation through history of the life of the Church described in the Acts of the Apostles (Chapters XXI—LXXII).

The Roman aphorism, Divide et impera, “Divide and rule” has acquired unpleasant connotations. It has to do, however, not with sowing division so as to be able to conquer a people but, rather, with distributing responsibilities among many, all of whom are accountable to a higher instance. Divide et impera lies at the origin of the principle of subsidiarity that informs all good government, be it ecclesiastical or civil, today. The notion of an institution akin to monastic deans already appears in the book of Numbers:

And the Lord said to Moses: Gather unto me seventy men of the ancients of Israel, whom thou knowest to be ancients and masters of the people: and thou shalt bring them to the door of the tabernacle of the covenant, and shalt make them stand there with thee, That I may come down and speak with thee: and I will take of thy spirit, and will give to them, that they may bear with thee the burden of the people, and thou mayest not be burthened alone. (Numbers 11:16–17)

The deans of the monastery are akin to the ancients and masters of the people with whom Moses shared the burden of his government. It is noteworthy that, before holding a meeting with the ancients to discuss the affairs of the people, Moses summons them to the door of the tabernacle of the covenant. There, they are to stand with Moses and wait upon God. The service of the elders begins in silence at the door of the tabernacle of the covenant. How different is this model from the “Americanist” approach to leadership — even in religious Institutes — that adopts the secular models of goal–setting, mission statements, planning, and strategy. The ancients, standing in silence at the door of the tabernacle of the covenant become witnesses of the gracious condescension of God who speaks to Moses “face to face, as a man is wont to speak to his friend” (Exodus 33:11). The spirit, that is the capital grace given to Moses, is shared among the elders. Having received a participation in Moses’ capital grace, the elders can begin to bear with him the burden of the people, lest Moses falter beneath the weight of his charge,

Some have suggested that in Chapter XXI, Saint Benedict has in mind the cœnobia of Saint Pachomius in Egypt, where houses of monks, under the headship of foreman or dean, specialised in a particular craft. There would have been, for example, bakers, cooks, cobblers, carpenters, weavers, gardeners, and scribes. The efficient Pachomian organisation, counting thousands of monks, divided into households and tribes would not have suited Subiaco, or Monte Cassino, or the Lateran. Saint Benedict does not, all the same, dismiss the notion of having deans, “should the community be large”, provided that these “direct their deaneries in all things according to the commandments of God and the will of their Abbot”. Saint Benedict’s deans, like the seven deacons of the primitive Church, are, in any case, to be “brethren of good repute and holy life”.

Then the twelve calling together the multitude of the disciples, said: It is not reason that we should leave the word of God, and serve tables. Wherefore, brethren, look ye out among you seven men of good reputation, full of the Holy Ghost and wisdom, whom we may appoint over this business. But we will give ourselves continually to prayer, and to the ministry of the word. (Acts 6:2–4)

The abbot, as father, priest, and shepherd, must give himself “continually to prayer, and to the ministry of the word” (Acts 6:4); the deans, being akin to the deacons described in the Acts of the Apostles, assist the abbot in material and organisational service of the monastery. Apart from deans set over groups of monks, there can be deans charged with particular concerns of the community’s life such as divine worship, education, hospitality, land management, food services, and health care.

In Egypt and in Gaul there were cœnobii peopled by hundreds of monks. Some of these, such as the monastery of Agaune, were dedicated to the laus perennis, that is, to perpetual psalmody. In such large communities, the division into deaneries would have been useful. In Italy, however, where monasteries tended to be smaller, abbots preferred to appoint a præpositus, or second–in–command, and government by deaneries never came into general use. Even in our own monastery it is necessary that responsibilities be shared among us. Each brother will develop not only the talents given him by God, but also a willingness to do cheerfully, diligently, and generously whatever task is given him. “Bear ye one another’s burdens; and so you shall fulfil the law of Christ” (Galatians 6:2).