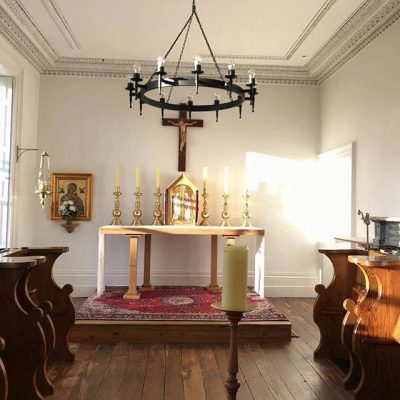 CHAPTER L. Of the Brethren who are working at a distance from the Oratory, or are on a journey
1 Apr. 1 Aug. 1 Dec.
Let the brethren who are at work at a great distance, or on a journey, and cannot come to the Oratory at the proper time (the Abbot judging such to be the case) perform the Work of God there where they are labouring, in godly fear, and on bended knees. In like manner, let not those who are sent on a journey allow the appointed Hours to pass by; but, as far as they can, observe them by themselves, and not neglect to fulfil their obligation of divine service.

We believe that the Divine presence is everywhere, and that the eyes of the Lord behold the good and the evil in every place. Especially should we believe this, without any doubt, when we are assisting at the Work of God. Let us, then, ever remember what the prophet saith: “Serve the Lord in fear”; and again, “Sing ye wisely” and, “In the sight of the angels I will sing praises unto Thee.” Therefore let us consider how we ought to behave ourselves in the presence of God and of His angels, and so assist at the Divine Office, that our mind and our voice may accord together.

When the monks cannot return to the Oratory for the Divine Office, they make an Oratory out of the place where they happen to be, not by building a structure of wood or of stone — although this was sometimes done — but by reproducing the silence, reverence, and fear of God that fill the Oratory of the monastery. What does Saint Benedict say concerning the Oratory?

Let the Oratory be what it is called, a place of prayer: and let nothing else be done, or kept there. When the Work of God is ended, let all go out with the utmost silence, paying due reverence to God, so that a brother, who perchance wishes to pray by himself, may not be hindered by another’s misconduct. (Chapter LII)

The expression may be understood as being either active or passive. Most translations follow the first understanding: “They shall have reverence toward God”. This is to insist on the reverence that the monks are to observe in the sentiments and their comportment, in a word, on the subjective aspect of their piety. One must admit that the context of this chapter favours this interpretation. Nonetheless, following the teachings of Maria Laach, we believe that we can give a more objective meaning to the phrase of Saint Benedict, one more fundamental to piety itself: the holiness of the Oratory comes not so much from men going there to pray as from the Presence of God. Hic domus Dei est, et porta caeli, “this is no other but the house of God, and the gate of heaven” (Genesis 28:17). In Scripture, this abode of God in the midst of men has a name; it is the Tent of Meeting that accompanied the Tabernacle of the Hebrews in the desert (Exodus 40:34–35). The Glory of God filled the temple of Solomon (3 Kings 8:10–12; cf. Exodus 43:1–5). How much more does the Glory of God fill Christian churches and the oratories of monasteries! Hence, “let the Glory of God fill the place”. (La vie et la règle de saint Benoît, translation by Mother Elisabeth de Solms, o.s.b., introduction by Dom Cluade Jean–Nesmy, o.s.b., Téqui, Paris, 1984, p. 257–258)

The second qualification, flectentes genua, indicates that, for Saint Benedict, the Divine Office is not merely a form of words. The Divine Office also engages the body in a very physical way: kneeling, bowing, standing, turning, falling prostrate, and sitting. Such gestures are not mere decorative bits of ceremonial; they are as constitutive of the Divine Office as are the words of the psalms, the antiphons, responsories, hymns, and other verbal elements.

Monks sent out on a journey are not thereby dispensed from their servitutis pensum, the fulfilment of their bounden service. Saint Benedict says that they are not to allow the appointed Hours to pass by. It is the Divine Office that gives rhythm, discipline, and order to the life of a monk. The monk who neglects the Hours will soon begin to experience the disintegration of his life. Work will become invasive, like a devastating weed cropping up everywhere through the cracks. Weariness and acedia will set in. The monk who neglects the Hours becomes like a man without a compass and without a timepiece, going from one thing to another without the one thing that gives structure and meaning to the passage of time.

It may not always be possible for a monk on a journey to read the Hours from a breviary. For the first time in about a century, we find ourselves in a situation not unlike monks after the French Revolution: monastic breviaries are increasingly rare and expensive. We have not even enough breviaries for each one in the community to have one. Fifty years ago, there would have been an abundant supply of monastic breviaries. Such is no longer the case. This being said, if a brother, for a reason that the abbot judges worthy, cannot read his Hours, he must, at least, say all those parts of the Office that he can recite from memory, making up for the rest from a Psalter at hand or with Our Lady’s Psalter, that is, the Holy Rosary, or with another form of prayer approved by the abbot.

The great principle of this chapter of the Holy Rule is that the Hours of the Opus Dei are, first of all, the bounden duty that we are vowed to render to God in all times and places. Secondly, the Hours are constitutive of the monastic life. You may as well remove the vertebrae from a man’s body as the Hours from the life of a monk. Just as the body collapses into a formless heap without the vertebrae, so too will the life of a monk collapse without the supporting structure of the Hours.