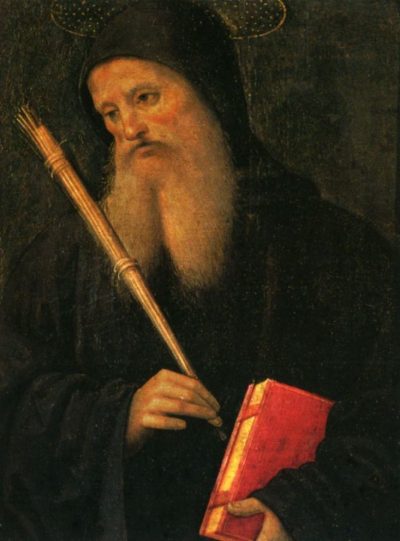 CHAPTER XXIII. Of Excommunication for Offences
28 Feb. 30 June. 30 Oct.
If any brother shall be found contumacious, or disobedient, or proud, or a murmurer, or in any way transgressing the Holy Rule, and contemning the orders of his seniors; let him, according to our Lord’s commandment, be once or twice privately admonished by his elders. If he do not amend, let him be rebuked in public before all. But if even then he do not correct himself, let him be subjected to excommunication, provided that he understand the nature of the punishment. Should he, however, prove incorrigible, let him undergo corporal chastisement.

We begin today the eight chapters of Saint Benedict’s penitentiale or penal code. In order to understand, right from the beginning of this section, the end that Saint Benedict has in view, we must go to the last phrase of Chapter XXX: ut sanentur, “in order that they may be healed”. All eight chapters of the Benedictine penal code must be read in the light of these two words: ut sanentur. Saint Benedict would have the abbot, as needed, “reprove, entreat, rebuke in all patience and doctrine” (2 Timothy 4:2), but even more he would have the abbot act “like a wise physician” (Chapter XXVIII). The abbot, says Saint Benedict, “hath undertaken the charge of weakly souls, and not a tyranny over the strong; and let him fear the threat of the prophet, through whom God saith: “What ye saw to be fat that ye took to yourselves, and what was diseased ye cast away” (Ezechiel 34:3–4).

An abbot can easily fall into showing a certain preference for brothers who are calm, obedient, cheerful, generous, intelligent, talented, and healthy, while turning away from brothers who are troubled, contrary, recalcitrant, gloomy, self–absorbed, limited, and awkward. The temptation is a real one because brothers of the first category make an abbot’s life pleasant, while those of the second category demand everything of him, becoming his preoccupation day and night. And, yet, the words of Our Lord remain: “They that are whole, need not the physician: but they that are sick” (Luke 5:31).

Chapter XXIII opens with a list of punishable (read treatable) offences (read maladies). First, there is the contumacious brother. The adjective contumacious derives from the Latin word for the swelling caused by a tumour. The contumacious brother is one who has a malignancy of the soul that makes him extremely sensitive and, therefore, uncooperative and resistant to treatment. The abbot must first identify the nature of the tumour, and then set about treating it. Some tumours can be lanced. Others require compresses. Still others must be surgically removed, or treated with radiation. The contumacious brother must pray for the grace of the Beatitudes: “Lord Jesus, meek and humble of heart, take from me the spirit of pride, defiance, insubordination, contradiction, and stubbornness; make me, rather, humble, poor in spirit, meek, merciful, peaceable, and lowly”. The contumacious brother will also do well to make his own the Lenten Prayer of Saint Ephrem:

O Lord and Master of my life, take from me the spirit of sloth, despair, lust of power, and idle talk. But give rather the spirit of chastity, humility, patience, and love to Thy servant. Yea, O Lord and King, grant me to see my own transgressions, and not to judge my brother, for blessed art Thou, unto ages of ages. Amen.

Next follows the disobedient brother. The disobedient brother is—go to the etymology ob-audire—disinclined to listen. His attitude is the opposite of what Saint Benedict sets forth at the beginning of the Prologue: “Hearken, O my son, to the precepts of thy Master, and incline the ear of thine heart; willingly receive and faithfully fulfil the admonition of thy loving Father”. The root of disobedience lies not in a brother’s ear, but in his heart. Behind the closed ear of the disobedient brother, there is a closed heart. Nothing so closes the heart of man as the swelling of pride. The prideful man says in his heart, “I needn’t listen because I already know; because I know better; because I know more; because I am, in so many ways, superior to my abbot and to all the brethren and from the height of my superiority, I alone see rightly”.

The prideful brother assumes that his perspective is the always the right one, that he has little or nothing to learn from others, and much to teach them. The prideful brother will, sooner or later, enter into conflict with his brethren, with his abbot, and with God. Pride always breeds conflict. If it is not open conflict, it is an invisible cold war waged under the appearances of righteousness. The abbot can most effectively treat the brother sick with pride by helping him to believe in the love of God. The prideful brother thinks that before God can love him, he must be perfect; then he goes on to believe that because he is perfect, God loves him.

In this is charity: not as though we had loved God, but because he hath first loved us, and sent his Son to be a propitiation for our sins. (1 John 4:10)

The murmurer is never satisfied with what is. His carping criticisms, even though be they non–verbal or whispered in dark corners, betray, at bottom, a profound dissatisfaction with his own life, and an attempt at giving himself worth by diminishing the worth of what he finds around him.  The abbot must help the mumurer to practice gratitude. Thanksgiving for what is must become the dominant motif in his life if he is to be freed of the vice of murmuring. Murmuring must be changed into praise.

The spirit of thanksgiving and benediction is a supremely efficacious remedy for many vices. People in AA often speak of the importance of gratitude in recovery. They do this, more often than not, without any explicit reference to God. We can, nonetheless, take a lesson from the AA program because we are, all of us, whether we want to admit it or not, in recovery. In recovery from sin. In recovery from the seven capital vices. One of the disciplines recommended in AA is the keeping of a gratitude journal. The brother who is in the grip of negative thinking—chronic complaining, mental criticisms of the abbot, the other brethren, the work, the choir, the food, his own sinfulness, and a host of other things—does well to make each day a list or a litany of the things for which he can be grateful. Over time, the spirit of thanksgiving and benediction drives out the spirit of murmuring, querelousness, and resentment. The day will come when the monk, become grateful, will surprise himself singing: “Benedicam Dominum in omni tempore; semper laus ejus in ore meo, “I will bless the Lord at all times, his praise shall be always in my mouth” (Psalm 33:12).

The abbot and seniors reach out to troubled and troublesome brothers by offering them a salutary correction: once or twice privately, and then, if there is no change, publicly. In extreme cases, a time apart from the community life (what Saint Benedict calls excommunication) may be indicated. For Saint Benedict, corporal punishment, something quite acceptable in his day, is a last resort, reserved for those who understand nothing else.

Not every man responds to talking things out. Not every man is capable of talking things out. In our own day, corporal punishment may take the form of doing something physical. There can be great therapeutic value in scrubbing a floor, or cleaning out a shed, in weeding a garden, or in putting one’s desk and cell in order. Why do I say this? One of the symptoms of pride is self absorption. Self–absorption can be a huge problem for monks. The silence of our life and the time dedicated to prayer can easily be deflected into ruminating about one’s own needs and the failures of others. Self-absorption makes the monastic life burdensome. Almost imperceptibly, physical work undertaken in a spirit of joyful penitence scrubs out vices, cleans away wrongful thinking, and restores order and beauty to one’s interior garden. An orderly environment disposes one to gratitude and to the lifting of heart and mind (affections and thoughts) to God in praise.