Skip to content
HomeRule of Saint BenedictOf Obedience (I) 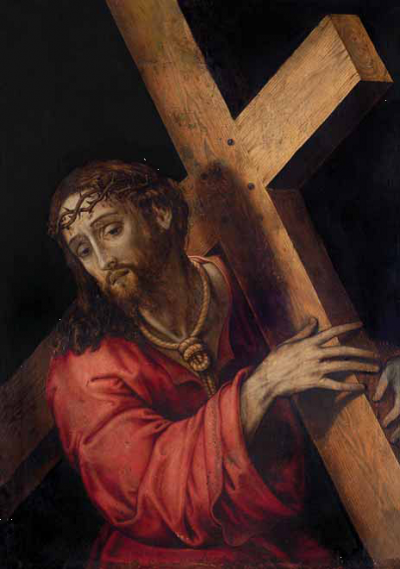 The first degree of humility is obedience without delay. This becometh those who hold nothing dearer to them than Christ, and who on account of the holy servitude which they have taken upon them, either for fear of hell or for the glory of life everlasting, as soon as anything is ordered by the superior, suffer no more delay in doing it than if it had been commanded by God Himself. It is of these that the Lord saith: “At the hearing of the ear he hath obeyed Me.” And again, to teachers He saith: “He that heareth you heareth Me.”

We enter today into the heart of the Holy Rule: into the three chapters in which Saint Benedict sets forth how a monk follows Christ: in obedience without delay (Chapter V), in the love of silence (Chapter VI), and in humility (Chapter VII). These are the chapters of the via crucis, the way of the Cross. These are the chapters of the monastic κένωσις (kenosis), that is the emptying out of self in sacrifice to God. Mother Mectilde de Bar sees this as constitutive of the Benedictine life; she contemplates the mystery of God who, hidden beneath the appearances of the Sacred Host, empties Himself out or, as she likes to say, makes Himself  as nothing (s’anéantit). These are the chapters of the mysterium Hostiae, the mystery of the Host, of Christ the Victim, of the Lamb immolated in a bloody manner once upon the altar of the Cross and, in an unbloody manner, that is mysterically or sacramentally, so often as the Holy Sacrifice of the Mass is offered upon the altars of the Church. Thus is the prophecy of Malachias fulfilled:

It is significant, especially for us, in the light of Mother Mectilde’s systematic use of the word victim in reference to the Most Blessed Sacrament and to those who feed upon it, that, until the Reformation, the English word used for the Most Holy Eucharist was the housel. The English housel derives from the Greek θυσία (thusía), a sacrificial victim. To administer Holy Communion was to housel; to receive the Sacred Host was to be houselled or to go to the housel. In recent centuries, the word sacrament is more commonly used in English to refer to the Most Holy Eucharist, but sacrament does not mean the same thing as housel. Housel designates a victim for sacrifice. The housel, therefore, is the Victim Christ, the immolated Lamb. To be houselled is to partake of the Victim; and one who partakes of the Victim becomes identified with the Victim, and enters into the mystery of the Victim’s immolation.

For Saint Benedict, the monk, being a man who holds nothing dearer to him than Christ, and who is houselled at the altar, enters by obedience into élan of Christ’s sacrificial victimhood. I use the word élan because it denotes what Saint Benedict means when he says: “The first degree of humility is obedience without delay”. In the Christus factus est that we sing during the last days of Holy Week, there is a wondrous upward flight of neums over the word obediens. It is the perfect translation into music of what characterises obedience in the mind of Saint Benedict. There is no foot–dragging, no holding back, no delay. Benedictine obedience is unhesitating, swift, and wholehearted.

One must take care lest, in executing a command, one become distracted along the way, stop to give one’s attention to other matters, and so delay the act of obedience. In sending forth His disciples, Our Lord says, “Carry neither purse, nor scrip, nor shoes; and salute no man by the way” (Luke 10:4). Benedictine obedience is carried along in the swiftness of the fear of God — it is an act of sacrificial worship, of θυσία — it is borne along enthusiastically in the impetus of love.

Such as these, therefore, leaving immediately their own occupations and forsaking their own will, with their hands disengaged, and leaving unfinished what they were about, with the speedy step of obedience follow by their deeds the voice of him who commands; and so as it were at the same instant the bidding of the master and the perfect fulfilment of the disciple are joined together in the swiftness of the fear of God by those who are moved with the desire of attaining eternal life. (Chapter VII)

Saint Benedict describes obedience as an expression of θυσία, a sacrificial immolation of the victim made over to God in imitation of Christ, and in union with the mystery of the Cross. Ronald A. Knox, in his monumental study of heretical religious movements, critiques what he calls enthusiasm. With all respect to Monsignor Knox, there is also, nonetheless, an orthodox enthusiasm, that is the Eucharistic enthusiasm that springs from the altar and drives one to the altar. Of this enthusiasm, this readiness for the ultimate sacrifice, Saint Ignatius of Antioch is the great exemplar.

Though I am alive while I write to you, yet I am eager to die. My love has been crucified, and there is no fire in me desiring to be fed; but there is within me a water that lives and speaks, saying to me inwardly, Come to the Father. I have no delight in corruptible food, nor in the pleasures of this life. I desire the bread of God, the heavenly bread, the bread of life, which is the flesh of Jesus Christ, the Son of God, who became afterwards of the seed of David and Abraham; and I desire the drink of God, namely His blood, which is incorruptible love and eternal life. I no longer wish to live after the manner of men, and my desire shall be fulfilled if you consent. Be willing, then, that you also may have your desires fulfilled. I entreat you in this brief letter; give credit to me. Jesus Christ will reveal these things to you, so that you shall know that I speak truly. He is the mouth altogether free from falsehood, by which the Father has truly spoken. Pray for me, that I may attain the object of my desire. (Epistle to the Romans, Chapters 7 and 8)