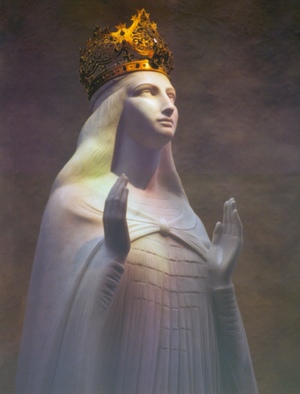 The Need for Octaves
Our Catholic liturgical tradition of the Octave respects one of the human heart’s deepest needs; the need to prolong the feast, the need to linger in the presence of the loved one, savouring every moment and storing up precious memories. For those who enter into the great liturgical festivals of the year there is an unwillingness to let them go, even after eight days. The Church has always honoured the need to prepare, to celebrate, and to prolong her solemnities. The custom of fasting before a feast is a way of making room in one’s soul for the graces flowing from the mystery commemorated. The custom of lingering over the same mystery for eight days is a way of assimilating those graces.

Pius XII
The Octave Day of the Assumption has been celebrated in various ways. In 1944, in the midst of the Second World War, Pope Pius XII entrusted the whole world to the Immaculate Heart of Mary. He decreed that the feast of her Immaculate Heart would be celebrated on August 22nd, the Octave of the Assumption. The same Pope Pius XII, in his encyclical of October 11, 1954, instituted the feast of the Queenship of the Blessed Virgin Mary on May 31st.

Pope Paul VI, writing in 1974, after the 1969 reform of the calendar, deliberately refers to the Octave Day of the Assumption. It would seem that he never intended the suppression of the Octave of the Assumption. Just as in the Glorious Mysteries of the Rosary the Coronation of the Blessed Virgin Mary follows the Assumption, so too does the feast of the Queenship of Mary on August 22nd complete and crown the celebration of her Assumption on August 15th.

The Collect
The Collect for today’s feast calls Mary “our Mother and our Queen.” It echoes the language of the Salve Regina: “Hail, O Queen, Mother of mercy.” Mary’s participation in her Son’s work of redemption surpasses that of every other creature. Being the Mother of the Redeemer, she entered at the foot of the Cross into the bloody sacrifice of the Fruit of her womb, offering Him and offering herself with Him.

Coredemptrix
Mary is the Coredemptrix not because of any deficiency in the redemption wrought by Christ, but because the Father willed that it should be so. This was the Father’s design from all eternity: that Mary, the New Eve, should enter fully into the saving work of the New Adam; that with Him she should become “obedient unto death on the Cross” (Phil 2:8); and that with Him she should be exalted forever in glory (cf. Phil 2:9).

Mediatrix of All Graces
Mary is the Mediatrix of All Graces because the Father willed that His Son should be “born of a woman” (Gal 4:4). The Father has given us all things in His Son. Saint Paul writes to the Romans, saying: “He that spared not even His own Son, but delivered Him up for us all, how hath He not also, with Him, given us all things?” (Rom 8:32). “And of His fullness we all have received, and grace for grace” (Jn 1:16). Everything is given us in Christ. Christ is given us through Mary. Everything, then, is given us in Christ through Mary. Jesuit poet Gerard Manley Hopkins put it this way:

The maternal role of Mary did not come to an end after the birth and childhood of her Son. Her participation in His divine mission grew and unfolded day by day, until on the day He suffered, she heard Him say from the Cross, “Woman, behold thy Son” (Jn 19:26). In that hour Mary became the mother of the Beloved Disciple and of every disciple until the end of time; and in that hour Our Lord provided her with the means to exercise her universal maternity freely and lavishly on behalf of all her children. This is the divine logic of her universal mediation. In his homily for the canonization of Saint Anthony of Saint Anne Galvão in Brazil last May 11th, Pope Benedict XVI pronounced one of the clearest statements ever made by the Popes on Mary as Mediatrix of All Graces. This is what the Holy Father said: “There is no fruit of grace in the history of salvation that does not have as its necessary instrument the mediation of Our Lady.”

Queen Omnipotent in Her Supplication
Look for a moment at the Preface of today’s Mass (Preface 39, Collectio Missarum de BVM, p. 153). Echoing the invocation, O Clemens, of the Salve Regina, the Preface calls her the Queen of clemency. Our Lady obtains pardon and mercy even for those who are undeserving of it. She pleads the cause of sinners before the Throne of Grace. She is omnipotent in her supplication; that is to say that God can refuse her nothing. Mary is drawn to those who have most need of her. She places her all–powerful supplication at the service of the least of her children. She intercedes for those who have forgotten how to pray and for those who dare not pray. She prays, as Julian Green would say, for chaque homme dans sa nuit, for each man in his night.

Mater Misericordiae
Again drawing on the Salve Regina, the Preface calls her the Mother of Mercy. There is not a single moment of the day or night when Mary is not wholly attentive to each of her children in this valley of tears. She is the Mother who keeps a tireless vigil over the whole world. She is present to every single soul redeemed by the Blood of her Son. You need do nothing to get her attention; you already have it. You have only to lift your eyes to her radiance and pronounce her name.

Ministra Pietatis
Finally the Preface uses a remarkable expression in Latin. It calls Mary the Father’s ministra pietatis. She is the minister of God’s faithful tender love for each of us. She administers that love whenever and wherever it is needed. Our Lady is charged by God with dispensing the graces of his lovingkindness. Ministra pietatis: this particular title evokes the mystery of the Blessed Virgin’s universal mediation of graces. The graces of the Heart of Jesus are administered by her maternal hands.

Our Life, Our Sweetness, and Our Hope
She who was assumed body and soul into heaven remains present and attentive to all of us and to each of us as Mother and as Queen. She is our life, our sweetness, and our hope because God has so willed it.
By honouring Mary as Mother and as Queen we honour the infinite wisdom of God. By acknowledging her as Coredemptrix and Mediatrix of all graces, we say “Yes” to the inscrutable designs of God and gain for ourselves the advocacy of one who is omnipotent in her supplications on our behalf.