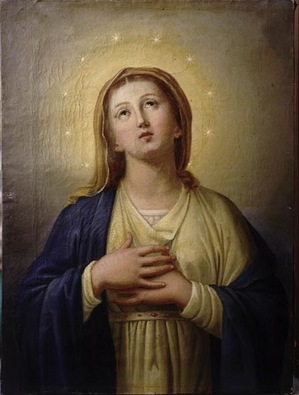 This morning at Vigils the Second Reading was from a homily by Abbot Geoffrey of Admont. It was wonderfully suitable, coming after the feasts of the Immaculate Conception and Our Lady of Loreto, and before that of Our Lady of Guadalupe.

All the patriarchs and prophets . . . being illumined by the Spirit of God, were able to see future events in advance, and by their discourses made known and loved the grace of salvation that, through Christ and His blessed Mother was to come into the world.

Note well that it is through Christ and His blessed Mother that the grace of salvation comes into the world. One detects the patristic leit-motif of Christ the New Adam, and of Mary the New Eve. Then, the Abbot of Admont goes on to present the Canticle of Canticles. I love this section. It echoes what Isaac of Stella says elsewhere.

From among these ancients, one very great sage (sapientissimus) Salomon, wrote a book to the praise and honour of Our Lady Mary: it is the Canticle of Canticles. While it can be applied to the holy Church and to every faithful soul, it is especially fitting to her by whom the Salvation of the world appeared to believers.

This twelfth century text witnesses compellingly, I think, to the Marian doctrine of co-redemption. Geoffrey of Admont, a monk of the Benedictine Congregation of Hirsau, was abbot of the monastery of Admont in central Austria from 1138 until his death in 1165. About two hundred of his homilies have been preserved.