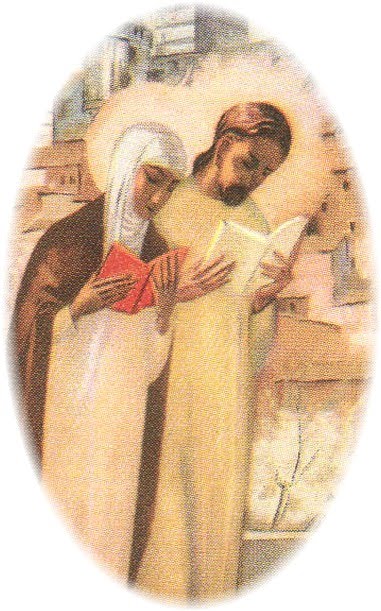 Images
Today’s feast of Saint Catherine brings to mind how she has moved about in my life at various times. Having grown up in a city graced with a magnificent Dominican church, I knew of Saint Catherine from having seen her in a stained glass window. As a little boy I was profoundly affected by pictures, especially “holy pictures.” Images engraved themselves in my memory. I remember having seen Saint Catherine crowned with thorns, and clutching the cross. In my “Lives of the Saints for Children” there was a romantic picture of Christ the King of Glory appearing in the sky over a young Catherine’s head. If I recall rightly, her little brother was with her.

Journet and the Fire of Love
I must have read about Saint Catherine in my Missal or in The Church’s Year of Grace by Pius Parsch, one of my favourite books from about age ten on. Years passed. I entered the monastery. One day I began reading the autobiographical notes of Cardinal Charles Journet. He described his own encounter with Catherine. He related how she erupted into his life as a seminarian, irrigating the dessicated theology of the “manuals” then in use, with a river of fire and of blood. Seminarians at the time were not allowed to read the mystics. They were deemed distractions from “serious theology.” The young Abbé Journet read Saint Catherine of Siena in secret. She saved him from the banalization of the Mystery and invited him to surrender not only his mind to the light of God, but also his heart to the Fire of Love.

In the Train to Lourdes
Several years later I was in a train going from Paris to Lourdes. Across from me in my compartment was an elderly Dominican Father engrossed in reading and in telling his beads. I had just finished saying part of the Office, when the Dominican smiled and offered me a “holy picture” from his own breviary. It depicted Saint Catherine of Siena reciting the breviary with Our Lord as they walked side by side. The elderly Dominican turned out to be Père Henri-Marie Manteau-Bonamy, the famous Mariologist.

Praying With Christ
There again, the image from Père Manteau-Bonamy’s breviary affected me deeply. I don’t know what has become of it. Someday perhaps I shall find it between the pages of a book. The truth it portrayed still challenges and comforts me. When I am obliged to pray the Divine Office alone and outside of choir, I softly sing my verse and then read the following one silently, allowing Our Lord to sing it. Thus do we form a single choir, a single body praising the Father together in the Holy Spirit. I never pray the Office alone. Christ is always present, singing His part, sustaining my weakness, and making my poor prayer all His. Had Père Manteau-Bonamy never given me that “holy picture” of Saint Catherine reciting the breviary with Our Lord, I would not, I think, be praying in quite the same way all these years later.