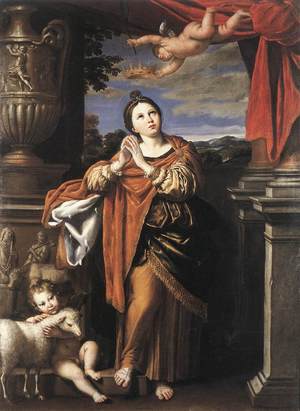 The wintertime liturgy sparkles with a constellation of virgin martyrs and holy women. The Roman Canon enshrines their names: Felicity, Perpetua, Agatha, Lucy, Agnes, Cecilia and Anastasia. In the darkest months of the year, they shine like so many little flames taken from the Paschal Candle in the great and holy night of the Resurrection. Today, we fix our gaze on Agnes.

If I Love Him

The Office of Saint Agnes is one of the most beautiful in the Roman Liturgy. Meditate it. Take it to heart today. It expresses all the sentiments of the little virgin martyr’s pure and passionate heart. “Christ is my Lover,” she sings in the Third Responsory at Matins, “and I am entering with Him into the marriage-chamber. . . . The instruments of His music sound sweetly in my ears. If I love Him I shall be chaste, if I touch Him I shall be clean, if I embrace Him I shall be a virgin indeed.”

Agnes was a mere child, a little girl of twelve. The year was 304, during the persecution of Diocletian. According to Roman law, a child of twelve was not held responsible for her choices and could not therefore be subject to trial and judgment. But Christians fell outside the pale of Roman law, and Agnes was a Christian.

What are we to make of these child saints and of others like them? Our Lord places them before us, saying, “Truly, I say to you, unless you turn and become like children, you will never enter the kingdom of heaven” (Mt 18:2). “To the boastful, I say: ‘Do not boast,’ to the wicked: ‘Do not flaunt your strength, do not flaunt your strength on high. Do not speak with insolent pride’” (Ps 74:5-6).

The Shepherd and the Lamb

The choice of the Responsorial Psalm was inspired by the name Agnes derived both from the Greek for “pure” and the Latin for “lamb.” Agnes is the pure lamb; Christ is the Shepherd. The familiar Psalm 22 thus becomes her song. Agnes the lamb sings the psalm of Christ the Shepherd in the midst of the Church. The fourth verse of the psalm evokes the passion and martyrdom of the saint. “For though I should walk in the midst of the shadow of death, I will fear no evils, for thou art with me. Thy rod and thy staff, they have comforted me” (Ps 22:4).

In his treatise On Virginity, Saint Ambrose says: “Girls of her age tend to wilt under the slightest frown from a parent. Pricked by a needle, they cry as if given a mortal wound. But Agnes showed no fear of the blood-stained hands of her executioners.” He tells us that while the executioner shook as though he himself were the criminal, and the faces of bystanders turned white at the sight, Agnes all the while remained without fear. “I will fear no evils” (Ps 22:4). Saint John gives the explanation: “Fear is not in charity: but perfect charity casteth out fear” (1 Jn 4:18).

Appropriately then, the Alleluia Verse focuses on love, twice repeating the verb so often heard in the mouth of Christ in the fourth gospel: abide. “Abide, remain, make thy home in my love,” says the Lord; “whoever abides, remains, makes his home in me and I in him will bear much fruit” (cf. Jn 15:9b, 5b). The Latin of the Roman Lectionary uses the word dilectio for love. Manete in dilectione mea. Dilectio is that love by which one distinguishes another by selecting him from others. Dilectio is the love that chooses another. Jesus is, in fact, saying in today’s Alleluia Verse, “Abide in my choice of thee.”

Saint Agnes understood that she was chosen. She sings, “My Lord Jesus Christ hath espoused me with His ring, and hath set on my head a crown as the crown of the bride.” The ring and the crown are the traditional symbols of the virgin consecrated to Christ. They represent Our Lord’s election of a particular soul, the choice of His love. The secret of consecrated virginity is one’s assent to the choice made by Jesus, who says, “You have not chosen me: but I have chosen you” (Jn 15:16). The consecrated virgin elects to abide forever in the Divine Bridegroom’s election of her.

The notion of abiding is akin to dwelling, to stability, and to permanence. Agnes, while yet a child, found her home, her stability, her unshakable permanence in Christ’s choice of her. The liturgy of virgins applies to them the word of the psalm: “God is in the midst of her; she shall not be moved” (Ps 45:6). Agnes, abiding in Christ’s choice of her, became the abode of charity — agápe, sacrificial love — and charity abiding in her drove out fear.

Look for the link between the Alleluia Verse and the Gospel. Consider the costliness of the treasure in the field (Mt 13:44) and the pearl of great price purchased by nothing less than all that one has (Mt 13:45). Stability in Christ’s choice of us, and freedom from fear, are not bought cheaply. Both are costly. Both demand a total investment, an investment deemed foolish by the worldly-wise: all that one has.

Agnes, a little child, took a foolish risk. She gave all that she had. “The crowds,” says Saint Ambrose, “marvelled at her spendthrift attitude to life, discarding it untasted, but as if she had lived it to the full.” Unlike the daughter of Jephthah who asked of her father two months to wander on the mountains and bewail her virginity (cf. Jg 11:37), Agnes went with willing and joyful steps to the place of her execution.

Toward the Banquet of Love Crucified

Agnes, pure lamb of the Shepherd-Christ, child-bride of the Lamb without stain, obtain for us who, at least, share thy weakness, a like share in the wisdom of thy folly. Lead us to the Banquet prepared by charity upon the altar, to the Banquet of Love Crucified, that we, like thee, may abide in Love’s choice of us.