Skip to content
HomeApostlesI offer on the altar the spotless Lamb 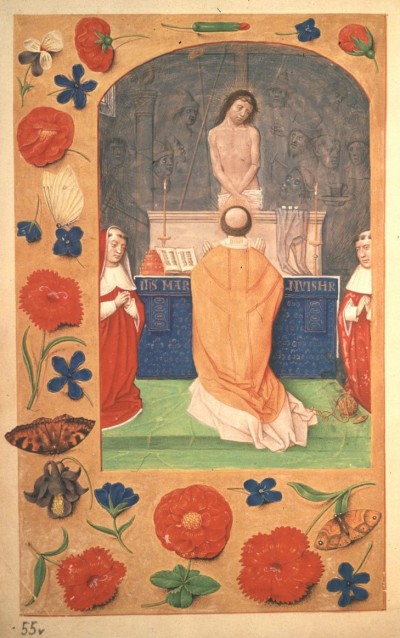 I remember when, in the wake of the Second Vatican Council, it was fashionable in some ecclesiastical and academic circles to sniff dismissively at the Lessons (or legends) given in the breviary for the Second Nocturn for the feasts of the saints. These hagiographical compositions, mostly of medieval monastic origin, were — and not without real profit — replaced in the reformed Liturgia Horarum by patristic texts or by excerpts from the writings of the saint being celebrated. Nonetheless, certain of the hagiographical compositions contained kernels of great antiquity drawn, more often than not, from the Acts of the Martyrs or from received local traditions. This morning at Matins, there was this beautiful passage, rich in Eucharistic theology, from the lesson (or legend) of the Second Nocturn:

Andrew continued to preach Christ fearlessly, that he gave himself up to be crucified for the salvation of mankind: Aegeus interrupted him with blasphemous words, and finally ordered him to look to himself and sacrifice to the gods. Andrew answered, I do offer sacrifice every day to Almighty God, who is the one true God; I offer on the altar, not the flesh of bulls, nor the blood of goats, but the spotless Lamb; and when all the faithful have partaken of his flesh, the Lamb that was sacrificed remains whole and living.

The notion of sacrifice is central. Aegeus, the pagan pro–consul, would have Andrew offer sacrifice to the gods and so obtain his freedom. Andrew answers that he does already offer sacrifice to Almighty God, and this daily, offering the spotless Lamb upon the altar. Andrew here, making reference to the altar, speaks as a priest. His sacrificial victim is “the Lamb slain from before the foundation of the world” (Apocalypse 13:8). The inseparable triad of sacrifice emerges from the text: priest, altar, and victim. The text further alludes to the daily offering of the sacrifice, the communion of the faithful, and the abiding real presence of the Lamb: an altogether brilliant Eucharistic discourse placed in the mouth of the First–Called of the Apostles.