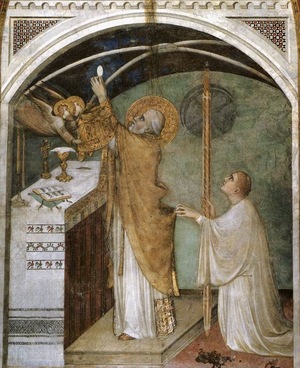 I am so impressed by Father Ray Blake’s reflections on celebrating Holy Mass ad orientem that instead of sending my readers over to his excellent blog I decided to post what he wrote here. The titles and italics are my own.
The Image of the Crucified
The great beauty of celebrating ad orientem is that it is the image of the Crucified that dominates the celebration not the face of the priest, the Pope talks about that in Spirit of the Liturgy. For the priest then the Mass becomes an action through Christ.
The Priest, A Revealer of the Divine
What becomes clear in celebrating Mass “with” the people is that the priest is doing something for them but what I have realised doing it with a growing congregation (normally it has been a side altar in an Italian Church, perhaps with a server, is that the Mass is an Epiphany, in the sense that apart from the elevations ( a late addition to combat heresy), the first time the people see the host is at the Ecce Agnus Dei (Behold the Lamb of God). I can understand that doing it everyday gave a very different theology of priesthood, the priest becomes the “revealer” of the divine. Someone who is called to show forth Christ not just at the Liturgy but in his life.
John, the Friend of the Bridegroom
There is a parallel with John the Baptist who in the Old Rite had a much more prominent part in the Eucharist, as he does in the Eastern Rites. On the iconostasis, in the Deesis, he was always a complimentary figure to Our Lady. Now that is an interesting subject for a doctoral thesis, “John the Baptist Model of Priesthood”, Dr Uwe Michael Lang suggests that the image of Our Lady and the image of the Baptist might have designated the women’s and men’s aisles of a Church, which gives an interesting spin on the model of the relationship of men and women in the pre-modern Church.

Preaching By Not Preaching
On Candlemas, I actually didn’t preach, it was my Friday penance. I normally preach briefly at every Mass I celebrate. Someone said that it made an incredible difference, in that the liturgy itself spoke. Again I think facing the people makes one think in terms of being a teacher, not a bad thing, but it is not the primary role of the priest, or rather it is but as St Francis says, “Preach the Gospel everywhere and if you must use words”.
Too Many Words
Maybe we use too many words, and meaning is lost in the words. Celebrating ad orientem means that one is less of a director, co-ordinator or animator of the liturgy more of a servant of it. Again that Baptist idea comes through, “he must increase I must decrease”. I think if the Holy Father encourages the ad orientem option in his response to the 2005 Synod on the Liturgy, we will have a richer theology of priestly spirituality. That document should come out soon, it is presumably held up by the expected Motu Proprio. Well actually the Missal says quite clearly on several occasions “the priest TURNS to the people” so maybe it is merely just an option. I think every priest should know celebrate facing east at least occasionally just for the sake of this richness.
As a footnote the General Instruction of the Roman Missal says “It is desirable that the altar should be detached from wall, so that Mass maybe celebrate facing the people, which is always desirable.” The Congregation for Divine Worship clarifying this rubric said that “which is always desirable” applied to the detachment from the wall not celebrating Mass facing the people. Interesting!