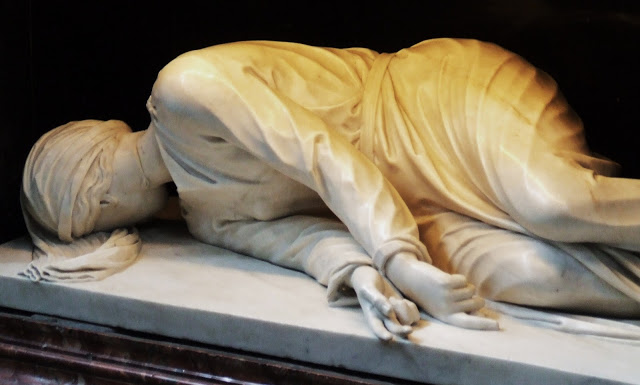 Wishing a very blessed feastday to our Oblate sister Cecilia of Rome in Connecticut!

A Veiled Face
I never tire of looking at the statue of Saint Cecilia which lies over the tomb in her church in Rome’s Trastevere. Cecilia is lying on her side, looking almost as if she had been flung there. Her lovely face is hidden and her head is covered with the veil of virgins. The slash of the cruel blade across her neck is visible.

Faith
Even in death Cecilia declares her Catholic faith: the finger of one hand is extended, signifying her faith in the one true God. With three fingers of the other hand she confesses the Most Holy Trinity. Her knees are drawn up, making her look like a sleeping child. Her dress falls in graceful folds about her body. The whole composition is marked by purity and grace.

Found Incorrupt
In 1599, when Pope Clement VIII disinterred Saint Cecilia’s body, it was found to be incorrupt. The Pontiff engaged Stefano Maderno to carve Cecilia just as she was discovered. The artist inscribed his testimony on the statue’s base: “Behold the body of the most holy virgin Cecilia whom I myself saw lying incorrupt in her tomb. I have in this marble expressed for thee the same saint in the very same posture of body.”

A Masterpiece
Stefano Maderno was only twenty-three when he carved his Saint Cecilia; though he lived be forty, Saint Cecilia is his masterpiece. Reposing in death, Cecilia illustrates the truth of the psalmist’s words: “God gives to His beloved in slumber” (Ps 127:2).

Thérèse
Maderno’s Saint Cecilia reminds me also of the young Thérèse Martin who lingered before it while on pilgrimage to Rome with her father in 1887. Later on, Thérèse was inspired to write this prayer:

Cecilia, lend to me thy melody most sweet:
How many souls would I convert to Jesus now.
I fain would die, like thee, to win them to His feet;
For him give all my tears, my blood. Oh, help me thou!
Pray for me that I gain, on this our pilgrim way
Perfect abandonment that sweetest fruit of love.
Saint of my heart! Oh, soon, bring me to endless day;
Obtain that I may fly, with thee, to heaven above!
April 28, 1893