Skip to content
HomeSaintsAnd Many Have Wondered at Him 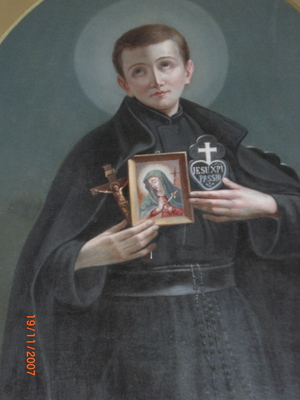 February 27 is also the feast of the young Passionist Saint Gabriel of the Sorrowful Virgin, known in the world as Francesco Possenti. He is known in Italy as il santo dei giovani, il santo dei miracoli, il santo del sorriso: the saint of youth, the saint of miracles, the saint of the smile. I first heard of Saint Gabriel when I was lad in grammar school. Boys were encouraged to read a biography of the youthful saint. I think it was called “Boy in a Hurry.” (Monsignor ABC, or Father Gregory O., or Father Martin F., or Terry N. would know. We seem to have read all the same books as boys!)
Last November when I preached a retreat to the Benedettine Riparatrici del Santo Volto at Carsoli in Italy, I was delighted to discover in their church a side altar dedicated to Saint Gabriel. This is the photo I took of the painting above the altar.
Introit
The Proper Mass for Saint Gabriel is one of those that, in my youth, I used to love to meditate — and still do. The Introit, for example:
The eye of God hath looked upon him for good
and hath lifted him up from his low estate,
and hath exalted his head;
and many have wondered at him,
and have glorified God (Ecclus 11:13).
V. How good God is to Israel,
to them that are of a right heart. (Ps 72:1)
Read the whole of Psalm 72 to get a very good portrait of Saint Gabriel’s soul.
Collect
The Collect is addressed to Our Lord Jesus Christ, as many modern Collects are, and alludes to the miracles worked by Saint Gabriel. He is a veritable thaumaturge.
O God, who didst teach the blessed Gabriel
diligently to ponder the sorrows of Thy most sweet Mother,
and who hast exalted him to the glory of sanctity and the working of miracles;
grant us, through his intercession and example,
so to share in thy Mother’s weeping,
that we may be saved through her maternal care.

Epistle
The Epistle (1 John 2:14-17) was chosen for the line, “I write unto you, young men, because you are strong, and the Word of God abideth in you, and you have overcome the wicked one.” Of course, the Apostle goes on to say, “Love not the world, nor the things which are in the world . . . the world passeth away and the concupiscence thereof: but he that doth the will of God abideth forever.” Francesco Possenti was, as a young man, charmed by what the world had to offer. He was mad about fashion, loved dancing, and conscious of the effect of his own good looks!
Gradual
I thrill to the Gradual for this Mass:
How great is the multitude of Thy sweetness, O Lord,
which Thou hast hidden for them that fear Thee.
V. Which Thou hast wrought for hem that hope in Thee,
in the sight of the sons of men (Ps 30:20).
Tract
Falling after Septuagesima, the Mass has a Tract drawn from Psalm 83. It allows Saint Gabriel himself to speak, saying: I have chosen to be an abject in the house of God, rather than to dwell in the tabernacles of sinners (Ps 83:11).
Gospel
The choice of the Gospel (Mark 10:13–21) is a stroke of liturgical genius. It begins with the apostles bringing to Jesus young children. (The youth of Saint Gabriel is a leitmotif of this Mass.) Jesus says, “Suffer the little children to come unto Me, and forbid them not; for of such is the kingdom of God” (Mk 10:14). The second part of the Gospel is the account of the rich man running up to Jesus and kneeling before Him to ask, “Good Master, what shall I do that I may receive everlasting life?” For me, the most touching line in this Gospel is: “And Jesus, looking on him, loved him.” Isn’t that the secret of every call to intimacy with Our Lord?
Offertory
The Offertory Antiphon is sung in Saint Gabriel’s own voice. The “handmaid” in the psalm verse is none other than Mary, the Ancilla Domini, the Sorrowful Mother.
O Lord, I am Thy servant, and the son of Thy handmaid.
Thou hast broken my bonds.
I will sacrifice to Thee the sacrifice of praise (Ps 115:16-17).
Secret
The Secret, like the Collect and the Postcommunion, is addressed to Christ. It speaks of offering up to Him (Christ) the Victim of salvation. How are we to understand this, given that the offering of the Sacrifice is made to the Father? The idea seems to be that the hostia — the victimal oblation of the Body and Blood of Christ in this Mass — is offered to the same Christ, the High Priest, to be presented to His Father.
We offer up to Thee, O Lord,
the Victim of salvation in memory of Saint Gabriel,
beseeching Thee to make us meditate upon the sacrifice of Thy death,
that through the merits of the sorrowful Virgin,
we may share abundantly in the fruit of this same sacrifice.
Communion
The Communion Antiphon, no matter how many times one repeats it, enchants the soul.
Behold, I stand at the gate and knock.
If any man shall hear My voice and open to Me the door
I will come in to him and will sup with him,
and he with Me (Ap 3:20).

Postcommunion
The Postcommunion hearkens back to the Gradual with its allusion to the hidden sweetness of Christ. It also includes an expression of thanksgiving, something not often encountered in the more ancient Postcommunions.
Graciously accept the thanks we render unto Thee, O Lord,
for the gifts we have received on the feast of Saint Gabriel, Thy confessor,
and from the hands of the ever glorious Virgin Mary,
from whom Thou hast taken flesh,
the sweetness of which we have tasted in this salutary sacrifice.