Skip to content
HomeSilverstream Priory, County MeathMonastery of Our Lady of the CenacleWhy the Cenacle? 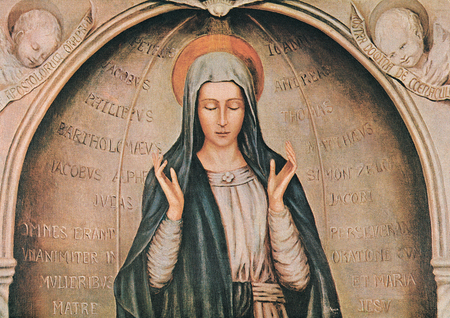 I took this essay from Our Lady of the Cenacle by The Reverend Father Felix , S.J., published by the Lafayette Press (New York) in 1896. I edited the text (a translation from the French) slightly and tried to make it more intelligible. Father Felix explains masterfully the significance of the dedication of our little monastery.

The Cenacle and the Most Holy Eucharist
Men of God, worthy of attention by reason of their religious virtues and their theological and ascetic science have, to explain the uniquely graced atmosphere of the Cenacle, had recourse to pious suppositions, which, without being of the value of a demonstration, possess with a certain probability a value of edification. We content ourselves here with recalling them without pretending either to repudiate them or to approve them entirely. Among these suppositions, one of the most likely and the best authorized by tradition, one that is even admitted to be almost certain by serious theologians, is that the Apostles in the Cenacle consecrated the Body and Blood of Jesus Christ, conformably to His divine recommendation: “Do this for a commemoration of me,” and that all the disciples present, with Mary, the Mother of Jesus, there participated in the holy mysteries. However more or less well founded may be this supposition, we have in no wise need of it to establish in a certain and incontestable manner what we have just affirmed, namely: that the primitive Cenacle was pre-eminently the place of Divine Grace.

It was in the Cenacle that our Lord Jesus Christ instituted the Sacrament of His Body and Blood, or of the life of God communicated to men in a permanent manner by our High Priest and Divine Mediator. Consequently, the Cenacle was the first place on earth honored and consecrated by the presence of the Eucharistic God, that is to say by the very source of Divine Grace, our Lord Jesus Christ. This same mystery of the Cenacle was, is, and will be perpetuated in the Church even to the consummation of the ages.

The Cenacle and the Blessed Virgin Mary
It was in the Cenacle also, in the Cenacle especially, that Divine Grace was exhaled from all the souls there assembled, and especially from the soul of the most Holy Virgin, well called full of grace. There the breath of all those souls in contact and in communication with one another, formed necessarily in that blessed place, as it were, a supernatural atmosphere that permeated every recess of their being and influenced them in every possible way.

The Cenacle and the Holy Ghost
Finally, it was in the Cenacle that, on the morning of Pentecost at the Third Hours, Divine Grace made its most solemn manifestation and its most brilliant apparition in a great wind and in tongues of fire. Thus did the Holy Ghost enter into the souls of the Apostles so as afterwards to spread Himself abroad in the city of Jerusalem and from there throughout the universe.

The First of All Our Temples
Thus looked upon, the Cenacle is indeed what we have named it, the privileged place of Divine Grace. However modest it may have been by it’s dimensions and by its architecture, no place has ever equaled it in importance, and no Christian temple, however sacred, has ever been so filled with Divine Grace as was that first of all our temples.

The Prayer of the Cenacle
But by what mysterious power was Divine Grace attracted to the Cenacle? What was it that caused it to descend in all and in each one with that plenitude the Holy Scripture expresses by these prodigious words: “They were all filled with the Holy Ghost; repleti sunt omnes Spiritu Sancto ?” The Scripture in the same Book of the Acts of the Apostles answers this question and explains to us this mystery : “All these were persevering with one mind in prayer with the women and Mary, the Mother of Jesus; Hi omnes erant perseverantes unanimiter in oratione cum mulieribus, et Maria matre Jesu. (Acts 1:14)

It is true that already, as we have just said, the Cenacle had, by the single fact of the institution of the Eucharistic Mystery, become the sacred dwelling of Divine Grace. But it may be remarked that the Saviour preceded and accompanied the consecration of His Body and Blood by His own prayer, as though He wished himself to prelude by prayer what may be called the installation of Divine Grace in the Cenacle.
What caused Divine Grace and divine life to descend and enter the Cenacle abundantly and super-abundantly was prayer. And what kind of prayer?

Universal prayer; for all prayed; all without exception.
Unanimous and fraternal prayer; for all prayed with one same mind and heart: unanimiter.
Persevering prayer: erant perseverantes in oratione.
Prayer confident of the promise of the Divine Master.
Omnipotent prayer: yes, omnipotent in Divine Grace and divine order by reason of its union with the prayer of Mary.

The Prayer of Our Blessed Lady
Mary, the Mother of Jesus, prayed in the Cenacle with the apostles, the disciples, and the holy women. She was there as the uniting centre of that collective prayer that mounted from the hearts of all, and especially from her maternal heart to the Heart of her Divine Son. She was there, an all-powerful suppliant; omnipotentia supplex, giving to that universal, unanimous, and persevering prayer the force to draw upon the Cenacle and upon all those abiding therein, with the coming of the Holy Ghost, Divine Grace in essence. And the Holy Ghost, called down by that victorious prayer, came with the resplendent signs which the Scripture relates; He came bringing the very substance of the supernatural and the plenitude of the gifts it contains.

Sober Drunkenness in the Holy Ghost
Never had anything similar been accomplished in humanity. Those men, but now so subject to all human weaknesses and such slaves of all the miseries of nature, are suddenly so filled, so penetrated, so truly inebriated with the supernatural and the divine, that the Jewish people, witnesses of this incomprehensible phenomenon, judge it to be a natural and material inebriation, the only one they then had any knowledge of; for nothing had ever resembled either closely or remotely this phenomenon, absolutely unique in the history of our human race.

Christ in Us
Behold in its mysterious reality the Apostolic Cenacle having in its centre Mary, Mother of Jesus and Queen of the Apostles. The Cenacle is the type and abridgment of the great mystery of Christianity. What is Christianity considered in its principle and in its intimate life if not the life of Jesus Christ dilating and expanding itself throughout space and time in proportion as the baptized of all nations are incorporated with it? And what is Jesus Christ, the Incarnate Word, if not the life of God manifesting itself under the form of our humanity and by God and with God coming to dwell in us. By Him and in Him, truly, we have all that is supernatural and divine; omnia per ipsum et cum ipso. It is in this sense that Saint Paul could say with all truth: “Christ is all my life; mihi vivere Christus est; He is all the life with which I live as a Christian, that is all my divine and supernatural life.”

As in the Cenacle, the prayer of the Church is persevering and permanent prayer, for the clock of time strikes not an hour when prayer does not spring forth from the hearts of millions and millions of Christians. Literally, that voice of prayer in the bosom of Christianity is not hushed day or night. As in the Cenacle, the Church’s universal and permanent prayer is magnificently unanimous, and, it may be added, divinely harmonious.

The Sacred Liturgy
Nothing in humanity equals the grandeur and the beauty of the Catholic liturgy, that is of the immense concert of organized prayer in the circle of Christianity, resounding everywhere: the voice of Christ the Head and of His Mystical Body, the Church. The Church prays at one same time in all parts of the world by those members whom she has hierarchically and officially charged with her prayer. From the rising of the sun to its setting, ascends that permanent, universal and harmonious prayer that is like a continuous aspiration by which the great Mystical Body of Jesus Christ draws to itself, develops and increases incessantly, the life of Divine Grace, the life of God in us.