Skip to content
HomeEssaysLiturgy, Doctrine, and Discipline: the Right Order 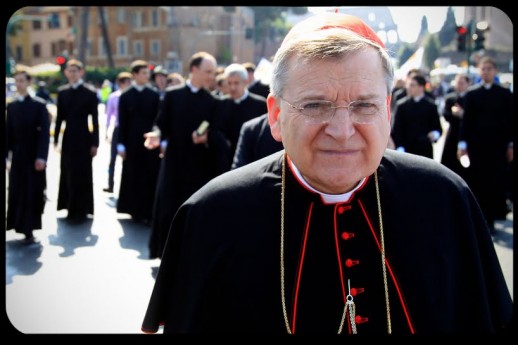 Speaking in Vienna this week, His Eminence, Raymond Leo Cardinal Burke said, “The Church’s discipline can never be other than true to her doctrine.” His Eminence was, in effect, articulating a principle that flows from the age–old law that grounds and shapes both Catholic doctrine and the Catholic moral life: Lex orandi, lex credendi, lex vivendi.

1. The lex orandi is the enactment of the sacred liturgy; it is composed not only of texts, but also of the whole complexus of sacred signs, gestures, and rites by which, through the mediating priesthood of Jesus Christ, men are sanctified and God is glorified. The sacred liturgy itself (being the Holy Sacrifice of the Mass, the other sacraments, the Divine Office, and the various rites and sacramentals found in the Church’s official liturgical books) is the Church’s theologia prima. It is in the sacred liturgy and though it that the Church receives her primary theology. The primary theology of the Church is a gift received from above, according to the word of Saint James: “Do not err, therefore, my dearest brethren. Every best gift, and every perfect gift, is from above, coming down from the Father of lights, with whom there is no change, nor shadow of alteration” (James 1:16–17). The Church’s primary theology is not something invented by learned men; it is found in the givenness of the liturgy, the primary organ of the Church’s authentic tradition.

2. The lex credendi is the articulation of what is already given, contemplated, and celebrated in the lex orandi. The Church’s doctrine emerges in all its shining purity — in the veritatis splendor — from the wellspring of her liturgy. Catholic doctrine, the Church’s theologia secunda, is the fruit of her liturgical experience. The sanctuary precedes the aula of theological discourse; the altar confers authority upon the academic chair. A theological discourse at variance with the lex orandi will be flawed and lifeless. I am sure that His Eminence, Cardinal Burke, would agree that when he speaks of the doctrine of the Church, he is referring to the authoritative teaching that is grounded in, and shaped by, the liturgy of the Church, her lex orandi.

3. The lex vivendi is the Catholic moral life, a life quickened by the theological virtues, a life in obedience to the divine commandments, characterized by the cardinal virtues, illumined by the Beatitudes, enriched by the Seven Gifts of the Holy Spirit, and displayed in the Holy Spirit’s Twelve Fruits. The lex vivendi pertains to all that teaches men to live rightly, to every ethical and social question, and to the pursuit of that holiness that already we contemplate in the saints set before us by the Church.

The traditional Catholic and Orthodox approach to the Church’s law and discipline has always been grounded in and shaped by her liturgy and her doctrine in this precise order: Lex orandi, lex credendi, lex vivendi.  The Protestant approach, on the other hand, begins with the question, “What are to believe?” and from this extrapolates a form of worship in accordance with belief, and a moral and ethical code reflecting both of these. Here, then, the order would be: Lex credendi, lex orandi, lex vivendi. The approach taken by Unitarians and secular humanists — being essentially pragmatic — begins with the question, “How do we want to live?” and from this extrapolates whatever beliefs or rituals most aptly support the chosen moral and ethical conventions. Here the order is: Lex vivendi, lex credendi (and if they have any form of cultus, lex orandi).

The current crisis in addressing moral questions from a Catholic position can, I would argue, be traced back through a crisis in doctrine to the crisis that has, in recent decades, affected the sacred liturgy to the point of reshaping it, deforming it, and re–inventing it according to the Protestant and Secular Humanist criteria described above. The restoration of Catholic doctrine in all its beauty and richness, and the consequent reclaiming of Catholic discipline as something both healing life–giving, will begin with the restoration of the sacred liturgy. I believe that His Eminence, Cardinal Burke, would agree with this wholeheartedly. The Church’s discipline can never be other than true to her doctrine, and her doctrine can never be other than true to her liturgy. Lex orandi, lex credendi, lex vivendi.