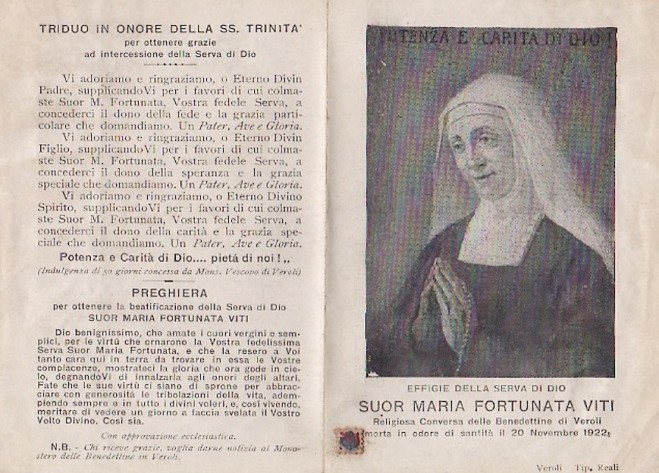 Today is the feast of a now nearly–forgotten Benedictine Blessed: Maria Fortunata Viti. Back in October 1967, at the moment of her beatification by the enigmatic Blessed Paul VI, Maria Fortunata Viti (1827–1922) had a fleeting moment of popularity. Somehow, many years ago, I came into possession of a first–classic relic of the then new beata.

Blessed Maria Fortunata, who died at the age of 96, after 72 years of praying, sewing, cleaning, and mending in the enclosure of her abbey in Frosinone, was, one might say, the feminine counterpart of Saint Charbel Mahklouf (1828–1898), the Maronite hermit beatified by the same Blessed Paul VI in 1965. It was, in some way typical of Paul VI’s almost studied magisterial quirkiness that, even while holding the discourse of Gaudium et Spes, he was giving the Church models of monastic holiness specifically chosen, I think, to serve as ballasts in the depths of Peter’s storm–tossed bark.

In his homily for the beatification of Maria Fortunata Vita on 8 October 1967, Blessed Paul VI said:

We are not dispensed from condensing into a single word this life, this holiness, in such wise as to classify under one word all that can be said about her; the word is humility. We expressed this even in the Brief of Beatification, and it seems to us to be the truest expression of her existence, and also the outstanding reason for her present glorification, which seeks only to place in view the reflection of the law of the Gospel in a soul in whom such a reflection attained its perfection.

Humility: Maria Fortunata personifies this virtue. Her greatness is in this littleness. We are in the framework of the Magnificat; and this itself already tells us the degree of Christian authenticity and spiritual depth in Maria Fortunata’s own perfection. Humility is her message; she invites us to it and very nearly obliges us to re–think the paradoxical exigency of the Christian life, grounded precisely in a convinced awareness of one’s own nothingness and in the practical application of this awareness: in the personal judgment that a Christian must cultivate concerning himself; in the saddening, and often difficult, encounter that one must endure in dealing with one’s neighbour; and also in the accusatory colloquy of one’s own misery to which the presence of God summons us, the colloquy of the utmost sincerity and of one’s abyssal need of divine mercy. That Christ made humility the primary condition of admission to His kingdom needs no proof; it is enough to remember, from among many such words of which the Gospel is full, the word that seems to define Maria Fortunata , revealed today as the first among the last: “Amen I say to you, unless you be converted, and become as little children, you shall not enter into the kingdom of heaven” (Matthew 18:3). Such is Maria Fortunata; and this explains how she preferred the lowest level of the religious life and how, with a victorious naturalness, carried out her hidden and submissive program of perfection.

Saint Benedict was her master. All know the celebrated pages of his monastic rule, where he speaks of the degrees of humility (Chapter VII), and in which we seem to glimpse the answer to the very serious objection that the conscious of man raises against humility — of modern man in particular — making himself the summit of every value, and speaking of his own personality as the most precious treasure one can acquire and keep. These are pages, we are saying, wherein one speaks of a double movement of the soul enrolled in the school of Christian humility: a movement of descent and a movement of ascent. Saint Benedict unfolds his lesson by calling to mind the biblical ladder of Jacob: exaltatione descendere et humilitate ascendere. This is the double movement, along which the soul come into contact with God is drawn and pulled. Humility is the fundamental religious virtue.

One who comes in contact with God is, at the same time plunged into awareness of the metaphysical reality of his own littleness, of his own misery, of his own nothingness; and is, at the same time, lifted up into the inebriating and vertiginous heights of nearness to God, and to an enlightened consciousness of the ineffable gifts that flow from Him. Thus is it truly that “whosoever humbles himself shall be exalted, and whosoever exalts himself shall be humbled” (Matthew 23:12), and that nothing is lost of what is true, great, and unique in the man who makes evangelical humility the philosophy behind his thinking, the Christian wisdom of his life. On the contrary, in such humility one discovers the true hierarchy of values and, almost without being aware of it, one makes one’s own those values that the goodness of God places at one’s disposition. This is the treasure of the humble, wherein all is beautiful because all things bear the divine reflection, which is all full of peace, of joy, of hope. These are, in fact, the higher gifts revealed and offered to the humble (cf., Matthew 11:25).

Maria Fortunata presents herself to us in this way today, and it seems that with her gentle countenance and with her mysterious words: “O the power and the charity of God!” she is introducing us into the rough and true paths of evangelical perfection. Let us speak now the truth to ourselves: a sentiment of shame, not perhaps of humility, takes us by surprise: she, yes, knew how to go up by humility «humilitate ascendere»;  it remains for us to admire her, to invoke her and, God willing, to imitate her.

Where Did All the Conversi Go?

1967. It is paradoxical that even as Blessed Paul VI acknowledged and ratified Maria Fortunata Viti’s choice of what he called “the lowest level of the religious life” — referring here to the vocation of the converse monk or nun (laybrother or laysister in English Catholic parlance) — that unique, distinctive, and eminently evangelical form of life was being suppressed by hasty legislation and this, more often than not, with little consideration for the wishes of those men and women who, having made profession of this form of life, expected, in good faith, to persevere in it until death. The dicey bit was article 15 of Perfectae Caritatis, The Second Vatican Council’s Decree On the Adaptation and Renewal of Religious Life, promulgated on 28 October 1965:

That all the members be more closely knit by the bond of brotherly love, those who are called lay-brothers, assistants, or some similar name should be drawn closely in to the life and work of the community. Unless conditions really suggest something else, care should be taken that there be only one class of Sisters in communities of women. Only that distinction of persons should be retained which corresponds to the diversity of works for which the Sisters are destined, either by special vocation from God or by reason of special aptitude.

One of the problems with the redaction of Perfectae Caritatis is that articles such as the one cited above were applied across the board with broad brush strokes, paying little attention to the rich diversity of each Order’s unique charism, history, and development. Monks, canons regular, mendicant friars, clerks regular: all of these found themselves challenged by a mandate that could be applied neither wisely nor uniformly without suppressing a treasured expression of holy diversity and a vocation that had proven itself, over centuries, to be a school of the highest holiness. Article 15 is a prime example of trying to say too much to too many people in one shot. Not exactly helpful.

A Hermeneutic of Secular Class Struggle

Sadly, the implementation of article 15 of Perfectae Caritatis was highly coloured by a hermeneutic of secular class struggle and, not a little, I think, by ghosts of the French Revolution still whispering “Liberty, Equality, Fraternity, or Death”. In more than one monastery, the chilling sentence was handed down from on high: “It has been decided that the laybrothers are to be suppressed as a distinct category and, insofar as possible, united to the choir monks to form a single expression of one common vocation”. Overnight, or so it seemed, the uniqueness of the converse (or laybrother) vocation was awkwardly abolished, mutated out of existence, or relegated to some dark corner of the archives.

Is this, in effect, what the three sentences of article 15 of Perfectae Caritatis called for? The directives given in the text are very spare. The door is left open to a reasonable interpretation of the text and to more than one application of it. The overarching principle is that “all the members be more closely knit by the bond of brotherly love”. The concrete goal is that “those who are called lay-brothers, assistants, or some similar name should be drawn closely in to the life and work of the community”. Nowhere is there any mention of suppressing the unique vocation of the above–named lay–brothers or assistants.  One garners from the tone of the text, rather, that while continuing in the grace of their own vocation, the lay–brothers are not to be marginalised, instrumentalised or, in any way, exploited, but honoured as members of one single family in which they play a distinct role. The third sentence, dealing with religious women — a topic I do not want to touch — offers criteria that would justify a certain diversity within the larger religious family: “special vocation from God or special aptitude”.

The Suppression of Legitimate Diversity

One of the most curious developments in the evolution of consecrated life since the promulgation of Perfectae Caritatis in 1965 and the beatification of Maria Fortunata Viti in 1967 is a steady trend towards dull uniformisation and the suppression of legitimate diversity from the top down, especially when the top tends to be of a more progressive persuasion. The whole question needs, I think, to be revisited not in reaction to Perfectae Caritatis, but in the light of a more serene and disinterested appropriation of the text.