Skip to content
HomeHoly Sacrifice of the MassThe Mass — You Can’t Live Without It, Part II 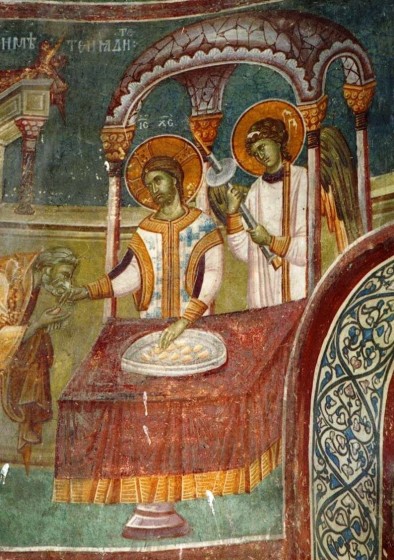 Here is Part II of the talk I gave on Saturday:

The Liturgy, Summit and Wellspring

The Constitution on the Sacred Liturgy, Sacrosanctum Concilium, affirms that,

The liturgy is the summit toward which the activity of the Church is directed; at the same time it is the font from which all her power flows. For the aim and object of apostolic works is that all who are made sons of God by faith and baptism should come together to praise God in the midst of His Church, to take part in the sacrifice, and to eat the Lord’s supper.

Ultimately, every missionary endeavour has but one goal: to bring men and women to the altar. It was the loss of this priestly, sacrificial, and eucharistic perspective that brought about a crisis in missionary life from which the Church has yet to recover.

Active Participation in the Most Holy Mysteries

Two papal documents (the first from Saint Pius X, and the second from Pope Pius XII) and a text of the Second Vatican Council’s Constitution on the Sacred Liturgy constitute an authoritative teaching on participation in the Holy Sacrifice of the Mass. The first of these, dated 22 November 1903, is contained pope Saint Pius X’s epoch–making Motu Proprio, Tra le sollecitudini, a document that, in many ways, still waits to be implemented in the Church.

Filled as We are with a most ardent desire to see the true Christian spirit flourish in every respect and be preserved by all the faithful, We deem it necessary to provide before anything else for the sanctity and dignity of the temple, in which the faithful assemble for no other object than that of acquiring this spirit from its foremost and indispensable font, which is the active participation in the most holy mysteries and in the public and solemn prayer of the Church. And it is vain to hope that the blessing of heaven will descend abundantly upon us, when our homage to the Most High, instead of ascending in the odor of sweetness, puts into the hand of the Lord the scourges wherewith of old the Divine Redeemer drove the unworthy profaners from the Temple.

The restoration of humanity to man — that is the recovery of his eucharistic, sacerdotal, and victimal vocation — is the beginning of the restoration all things in Christ.  The finest flowerings of human culture are themselves the fruit of the cultus of latria, that is, of the sacrificial worship due to God alone.

The question remains, then, of just how one participates actively “in the most holy mysteries and in the public and solemn prayer of the Church”. Pope Pius XII situates active participation in a personal and corporate adhesion to the sacrifice of Christ who, in every Holy Mass, exercises His priesthood and offers Himself as a spotless victim to the Father. One comes to Holy Mass, then, not after the manner of a consumer looking seeking spiritual gratification but, rather, as an offerer bearing to the altar the oblation of his own life, as a royal priest set over all created things in order to raise them heavenward in the Great Thanksgiving (Eucharist), and as a victim, a sacrificial lamb ready to be made over to God in Christ. In Christ and in the members of His Mystical Body are the prophetic words of Abraham to Isaac wondrously fulfilled: “God Himself will provide the lamb” (Genesis 22:8). Pope Pius XII writes:

All the elements of the liturgy, then, would have us reproduce in our hearts the likeness of the divine Redeemer through the mystery of the cross, according to the words of the Apostle of the Gentiles, “With Christ I am nailed to the cross. I live, now not I, but Christ liveth in me.” Thus we become a victim, as it were, along with Christ to increase the glory of the eternal Father.

Pope Pius XII does not shrink from using the language of victimhood; rather does he elucidate its meaning and propose it as something essential to the holiness of all the baptized. He goes on to say:

Let this, then, be the intention and aspiration of the faithful, when they offer up the divine Victim in the Mass. For if, as St. Augustine writes, our mystery is enacted on the Lord’s table, that is Christ our Lord Himself, who is the Head and symbol of that union through which we are the body of Christ and members of His Body; if St. Robert Bellarmine teaches, according to the mind of the Doctor of Hippo, that in the sacrifice of the altar there is signified the general sacrifice by which the whole Mystical Body of Christ, that is, all the city of redeemed, is offered up to God through Christ, the High Priest: nothing can be conceived more just or fitting than that all of us in union with our Head, who suffered for our sake, should also sacrifice ourselves to the eternal Father. For in the sacrament of the altar, as the same St. Augustine has it, the Church is made to see that in what she offers she herself is offered.

United with High Priest and His Earthly Minister

Pope Pius XII evokes the compelling image of the sacrificing priest standing before the altar in persona Christi capitis — in the person of Christ the Head. Behind him, and facing with him in the same direction, stand the faithful participating in the Holy Sacrifice. Here, in the words of Pope Pius XII, quoting Saint Augustine, is “the general sacrifice by which the whole Mystical Body of Christ, that is, all the city of redeemed, is offered up to God through Christ, the High Priest”. The priest alone offers the sacrifice in persona Christi capitis, but the people, members conjoined to the same Head, place the seal of their assent upon the Great Thanksgiving by singing “Amen”.

Let the faithful, therefore, consider to what a high dignity they are raised by the sacrament of baptism. They should not think it enough to participate in the eucharistic sacrifice with that general intention which befits members of Christ and children of the Church, but let them further, in keeping with the spirit of the sacred liturgy, be most closely united with the High Priest and His earthly minister, at the time the consecration of the divine Victim is enacted, and at that time especially when those solemn words are pronounced, “By Him and with Him and in Him is to Thee, God the Father almighty, in the unity of the Holy Ghost, all honor and glory for ever and ever”; to these words in fact the people answer, “Amen.” Nor should Christians forget to offer themselves, their cares, their sorrows, their distress and their necessities in union with their divine Savior upon the cross.

Christ indeed always associates the Church with Himself in this great work wherein God is perfectly glorified and men are sanctified. The Church is His beloved Bride who calls to her Lord, and through Him offers worship to the Eternal Father.

Rightly, then, the liturgy is considered as an exercise of the priestly office of Jesus Christ. In the liturgy the sanctification of the man is signified by signs perceptible to the senses, and is effected in a way which corresponds with each of these signs; in the liturgy the whole public worship is performed by the Mystical Body of Jesus Christ, that is, by the Head and His members.

From this it follows that every liturgical celebration, because it is an action of Christ the priest and of His Body which is the Church, is a sacred action surpassing all others; no other action of the Church can equal its efficacy by the same title and to the same degree. (Sacrosanctum Concilium, article 7)

The Constitution on the Sacred Liturgy express the Church’s earnest desire that all the faithful should participate fully, consciously, and actually in liturgical celebrations. This, of course, is but a rephrasing of what Pope Saint Pius X wrote sixty years earlier concerning, “the active participation in the most holy mysteries and in the public and solemn prayer of the Church”.

Mother Church earnestly desires that all the faithful should be led to that fully conscious, and active participation in liturgical celebrations which is demanded by the very nature of the liturgy. Such participation by the Christian people as “a chosen race, a royal priesthood, a holy nation, a redeemed people (1 Pet. 2:9; cf. 2:4-5), is their right and duty by reason of their baptism.

In the restoration and promotion of the sacred liturgy, this full and active participation by all the people is the aim to be considered before all else; for it is the primary and indispensable source from which the faithful are to derive the true Christian spirit; and therefore pastors of souls must zealously strive to achieve it, by means of the necessary instruction, in all their pastoral work.

Into the Sacrifice of Christ

The highest and most fruitful degree of participation in the liturgical action is achieved when the faithful, drawn to the altar and represented there by the priest, inhere in the great eucharistic and sacrificial movement for which they were created, and into which they were baptized: Christ the High Priest making Himself over to the Father. Christ offers Himself in sacrifice, not in isolation from His members, for He exercises His priesthood as the Head of His Body, the Church. He is the sacrifice by which all creation is sanctified. He is the Lord of History, the Alpha and the Omega in whom all things that are in heaven and on earth are recapitulated and restored to their primal liturgical and eucharistic finality.

One comes to the Holy Sacrifice of the Mass, then, not to “get something out of it” but to pour oneself into it. And, in doing this, one becomes one’s true self  in a manner that glorifies God and causes one to go forward, impelled by the sacrificial love of Christ, “from glory to glory” (2 Corinthians 3:1). The Mass — you cannot live without it.