Skip to content
HomeAdvent LiturgySaint Barbara and Her Three Windows 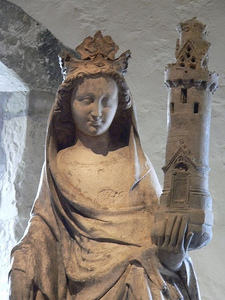 Saints in Advent
We celebrate the Holy Mysteries on December 4th in the company of two saints, both of them lights from the East: Saint Barbara, Virgin and Martyr, and Saint John Damascene, Priest and Doctor of the Church. Today I will remember at the altar the friends named Barbara whom God has placed in my life. Saint Barbara, according to the legend, was enclosed in a tower (some accounts say it was a bathhouse) by her pagan father. There were two windows in this improvised prison cell.

Three Windows
Taking advantage of her father’s temporary absence, Barbara instructed the servants to make a third window in honour of the Most Holy Trinity. The light poured into Barbara’s cell from three windows; her soul, meanwhile, was flooded by what Saint Benedict calls “the deifying light” of the Three Divine Persons. Thus was Saint Barbara found “vigilant in prayer and joyful in singing the divine praises” at the hour of her martyrdom.

God is Light
In this, Saint Barbara speaks to all who feel hemmed in and imprisoned by the circumstances of life. To all who feel shut in and imprisoned, to all who live behind walls, Saint Barbara says, “Lift your eyes to the light of the Most Holy Trinity. Let the glorious radiance of the Three Divine Persons shine in your solitude.” Her message is that of Saint Paul who says, “Mind the things that are above, not the things that are upon the earth. For you are dead; and your life is hid with Christ in God. When Christ shall appear, who is your life, then you shall appear with Him in glory” (Col 3:2-4). Her message is that of the Apostle John: “God is light, and in Him there is no darkness” (1 Jn 1:5).

At the Door
Captivity became for Saint Barbara a time of “eager anticipation” for the advent of Christ her Bridegroom. Today’s Collect would have us await the advent of Christ, “untainted by the contagion of our former ways,” and already “consoled by the presence of Him who is to come,” in such wise that waiting becomes the adoration of His Face. Then when Christ knocks at the door, He will find us turned toward Him, vigilant in prayer, and joyful in singing His praises. “Behold,” He says, “I stand at the gate, and knock. If any man shall hear my voice, and open to me the door, I will come in to him, and will sup with him, and he with me” (Ap 3:20).