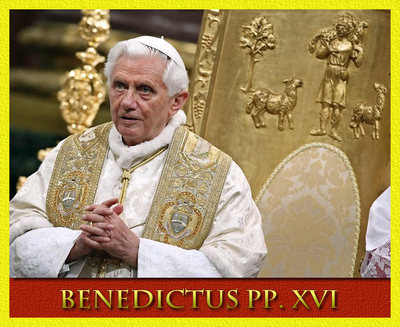 The Primacy of Gregorian Chant

I wish to highlight a fundamental aspect that is particularly dear to me: how the essential continuity of the teaching on sacred music in the Liturgy has been perceived since St. Pius X up til today, despite the natural evolution. In particular, the Pontiffs Paul VI and John Paul II, in the light of the conciliar constitution “Sacrosanctum Concilium,” wished to reaffirm the end of sacred music, namely, “the glory of God and the sanctification of the faithful” (No. 112), and the fundamental criteria of Tradition, which I limit myself to recall: the sense of prayer, of dignity and of beauty; the full adherence to the texts and to the liturgical gestures; the involvement of the assembly and, finally, the legitimate adaptation to the local culture, preserving at the same time the universality of the language; the primacy of Gregorian chant, as supreme model of sacred music, and the wise appreciation of the other expressive forms which form part of the historical-liturgical patrimony of the Church, especially but not only, polyphony; the importance of the “schola cantorum,” in particular in the cathedral churches. They are important criteria, which must be considered carefully also today.

At times, in fact, these elements, which are found in “Sacrosanctum Concilium,” such as, in fact, the value of the great ecclesial patrimony of sacred music or the universality that is characteristic of Gregorian chant, were considered expressions of a conception that responded to a past to be overcome and neglected, because it limited the liberty and creativity of the individual and the communities. However, we must always ask ourselves again: Who is the authentic subject of the liturgy? The answer is simple: the Church. Not the individual or the group that celebrates the liturgy, it is first of all the action of God through the Church, which has her history, her rich tradition and her creativity.

The liturgy, and consequently sacred music, “lives from a correct and constant relation between healthy ‘traditio’ and legitimate ‘progressio,'” keeping very present that these two concepts — that the conciliar Fathers clearly underscore — integrate mutually because “tradition is a living reality that, because of this, includes in itself the principle of development, of progress” (Address to the Pontifical Liturgical Institute, May 6, 2011).

The Mass at San Giuliano Park

A model of what the Second Vatican Council intended was given at the Mass celebrated by the Holy Father on 8 May 2011 in San Giuliano Park on the occasion on his recent visit to Venice. To my edification and delight a schola cantorum sang the complete Proper of the Mass in Gregorian Chant, while the vast crowd of the faithful alternated the Paschaltide Ordinary (Mass I) Lux et Origo with the choir. The organizers of this celebratIon are to be commended and congratulated.

The Beatification Mass in Faicchio

The Mass of Beatification of the Venerable Servant of God Mother Maria Serafina del Sacro Cuore on 28 May 2011 gave me a firsthand experience of what appears to be the norm in most of Italy. As Dom Samuel Weber, O.S.B. is fond of saying, “I’m just reporting.”

The Proper of the Mass was completely ignored. The Introit, Offertory, and Communion were replaced by songs composed in the popular style. While these pieces were not entirely devoid of scriptural and theological content they were not “the Mass” itself. Consequently, the faithful were not singing the Mass; they were, rather, singing at Mass.

This, of course, deprives the faithful of the richness of the liturgy itself and, at the same time, deprives the celebrant of the very texts out of which the Church would have him preach the homily.

The celebrant of the Mass of Beatification was His Eminence, Angelo Cardinal Amato, Prefect of the Congregation for the Causes of Saints. His Eminence has a fine singing voice. He chose, nonetheless, to speak nearly all those parts of the Mass that, in so solemn and festive occasion, ought to be sung. To my dismay, His Eminence recited in a spoken tone of voice even the Preface of the Mass, the most lyrical and solemn element of the Liturgy of the Eucharist, one that, by its very nature cries out to be sung.
The end result was an anomaly: on this most festive occasion there was, in effect, nothing more than a Low Mass with a sung Ordinary (Mass VIII) De Angelis and with hymns. Very disappointing.

On the morning of 2 June 2011, it was again His Eminence, Angelo Cardinal Amato who celebrated a Pontifical Mass in the glorious baroque Church of San Marcellino in Piedimonte Matese. A deacon, vested in a splendid red dalmatic and surrounded by a magnificent baroque decor read the Gospel in a spoken tone of voice that rendered it banal. The Gospel could have been, and should have been chanted.
Again, absolutely nothing of the Proper of the Mass was sung. The Ordinary was sung in Italian, using a rather sentimental popular setting of the Gloria with a refrain. The Creed was recited: very disappointing on an occasion when the sung Creed would have been marvelously expressive of the faith of the Church and of her martyrs through the ages.

Again, His Eminence recited in a spoken tone of voice all of the parts belong to the celebrant. This was acutely disappointing, given both his ability to sing, and the solemnity of the occasion. And again, the end result was a Low Mass with a sung Ordinary in Italian and popular hymns.

In the Local Parish

We Southern Italians love to sing, and sing we do! The faithful are deprived, nonetheless, of the authentic chants of the Church. Since my arrival here, not once have I heard the Proper of the Mass (even recited) nor anything even remotely related to it.

The Ordinary of the Mass is trivialized by settings in Italian that are sentimental and that have no organic continuity with the musical tradition of the Church. Not once have I heard a priest sing the orations or the Preface of the Mass and this in a culture where to sing is to love, and to love is to sing.

The Motu Proprio of Pope Saint Pius X, Tra le sollecitudini (22 November 1903) has yet to be implemented. In fact, it continues to be transgressed widely and habitually. In conclusion, allow me to say that the situation is, if possible, even worse in the United States. Usquequo Domine?

Would it not be opportune for the Holy Father to issue a Motu Proprio with, if you will pardon the expression, some teeth in it? Such a document might give to the following the force of law:

1. The distinction between a Missa Recitata and a Missa Cantata is to be clarified, restored, and implemented. At every Missa Cantata, the priest celebrant is obliged to sing the salutations and dialogical elements, the orations, the Preface, the Per Ipsum, the Pater Noster, the LIbera nos, the Blessing, and the Dismissal.

3. The response to the Prayers of the Faithful will be one of those given in the last edition of the Missale Romanum, even when the intentions themselves are cantillated in the vernacular.

4. The Ordinary of the Mass, including the Credo, is to be sung in Latin and in Gregorian Chant as given in the Kyriale of the Graduale Romanum, or in suitable polyphonic settings.

5. The Proper of the Mass, including the Offertorium, is no longer an optional element, nor may it be replaced by any other chant or song. It may be sung in Latin as given in the Graduale Romanum, or in the vernacular, provided that the melodies used for vernacular text are derived from the corresponding Gregorian Chant and preserve its modal character.

6. At the Missa Recitata, the Proper of the Mass must be recited. The Offertorium is to be restored to the Missale Romanum and to all the vernacular editions thereof.

7. The Gradual Chant and the Alleluia are to be included in future editions of the Missale Romanum and the Lectionary, both in Latin and in the vernaculars, and are to be presented henceforth as legitimate and praiseworthy alternatives to the Responsorial Psalm and Alleluia of the current Lectionary.

P.S. Some will, of course, object that not every priest is capable of singing the parts of the Mass that belong to him. A curious objection. I distinctly remember that in the former dispensation, when the stipend for High Mass was significantly more than the stipend for a Low Mass, priests seem to have had no difficulty in singing their parts, even when their vocal abilities were not outstanding.