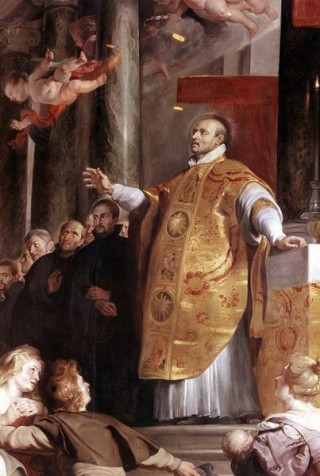 The “Deputation” Argument
The whole Benedictine—Jesuit controversy of the beginning of the last century is something that has long captured my attention. My own research into the question is beginning to show that the Jesuit “anti–liturgical” prejudice of the early 1900s was based on certain theses related to “liturgical deputation” that should have been put to rest by Sacrosanctum Concilium, but were not — certainly not in Jesuit circles. In a nutshell, the “liturgical deputation” position, adopted by some Jesuits of the last century, argues that the full liturgical life as laid out in the books of the Roman Rite — Missal, Breviary, Pontifical, and Ritual — pertains only to those who, by canonical mandate, are deputed to carry out the rites therein contained.

This argument, as put forward by L. Malevez, S.J., in the wake of the lively disputes following the publication of Maritain’s Liturgie et contemplation, sustains that only those canonically deputed by the Church to pray the Divine Office (clergy in major Orders, religious in solemn vows) need have an interest in doing so. The Jesuit author further argues that the liturgy is something remote and unfamiliar to the laity, and that the Spiritual Exercises, and the resolutions they foster, better equip the laity for a holy Christian life in the real world. The problem — and this was the argument of the Benedictines engaged in the fray — is that this Jesuit position flies in the face of Pope Saint Pius X’s clear teaching:

We deem it necessary to provide before anything else for the sanctity and dignity of the temple, in which the faithful assemble for no other object than that of acquiring this spirit from its foremost and indispensable font, which is the active participation in the most holy mysteries and in the public and solemn prayer of the Church. (Tra le sollecitudini, 22 November 1903)

“Foremost and Indispensable” Called into Question
The Jesuit position was (and, I think, largely remains) that the “active participation in the most holy mysteries and in the public and solemn prayer of the Church” need not be considered the “foremost and indispensable font” of the authentic Christian spirit, and that, for layfolk, there are other more practical and effective means of acquiring the authentic Christian spirit, namely the Spiritual Exercises, meditations, examinations of conscience, and private devotions. The Belgian Benedictines of Maredsous and Mont–César, led by Beauduin, Festugière, Vandeur, and even Marmion, rose up in defense of the teaching of Pius X and re–affirmed it, stressing the phrase, “the foremost and indispensable font” Herein lies the crux of the problem.

The Liturgical Movement
The Jesuits involved in the debate would have said that for the ordinary Catholic, regular ongoing access to “the foremost and indispensable font” was, practically speaking, limited to Holy Mass, Confession, and Holy Communion. They would have supplemented this regime of liturgical minimalism for the laity by preaching the Spiritual Exercises, by promoting the Apostleship of Prayer, and by offering instruction in systematic meditation and examinations of conscience.

The Belgian Benedictines, having invested so much in the great classical Liturgical Movement (see the famous Missel–Vesperal of Dom Lefebvre, Bruges, also called the Saint Andrew’s Missal) held fast to their belief that the fulness of the liturgical life needed to be opened to the lay faithful, that is, not only sung Mass with their participation, but also the Divine Office (principally Vespers), and the whole panoply of processions, blessings, and sacramentals contained in the Pontifical and Roman Ritual. This latter position was adopted by Dom Virgil Michel of Saint John’s Abbey, Collegeville and, through his teachings and publications, gained ground in the United States. The popularisation of the full liturgical life was further promoted by the Augustinian Canon Pius Parsch, by Monsignor Martin Hellriegel, and — res mirabilis — by the Jesuit, Father Francis X. Weiser! One of the American Liturgical Movement’s magnificent achievements was the publication of the Collegeville Short Breviary (1941), which knew a phenomenal success, and might well have been taken as a model for the post–conciliar adaptations of the Roman Breviary — but that is another story! In Ireland, the Legion of Mary under the charismatic leadership of its saintly founder, Frank Duff, in collaboration with the Benedictines of Glenstal Abbey, produced the Saint Columba Breviary for the use of layfolk engaged in the workaday world.

A Return to Mediator Dei
The Benedictines saw the Jesuit position as an attack on the Liturgical Movement, and the Jesuits saw the Liturgical Movement as a threat to their apostolate of preaching the Spiritual Exercises. Mediator Dei was written, I believe, to address the dilemma. Pope Pius XII specifically names the Benedictines and the Jesuits in the text of the encyclical. As the argument continues, even today, I think that a return to Mediator Dei is the only salutary way to address the debate in an enlightened manner.