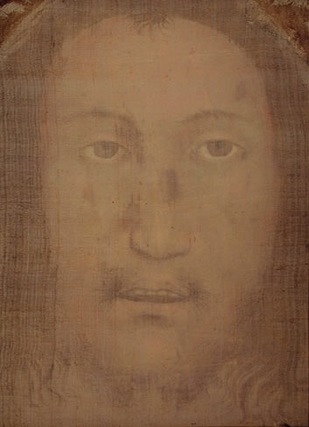 Reparation
The last century saw, here and there, like so many points of light in the Church, men and women drawn by the Holy Spirit to the contemplation of the Face of Christ. In many cases this attraction to the Holy Face of Jesus was characterized by the prayer of reparation. The spiritual impulse to make reparation emerged in the aftermath of the French Revolution and, in the twentieth century, became in some way a response to the horrors of two World Wars. Violence, terrorism, and war continue to inspire a prayer of reparation that looks to the Face of Christ. We are most affected by acts of violence that disfigure the human face. Hear Isaiah’s prophecy of the Servant: “His appearance was so marred, beyond human semblance, and his form beyond that of the sons of men. . . . He was despised and rejected by men; a man of sorrows, and acquainted with grief, and as one from whom men hide their faces he was despised, and we esteemed him not” (Is 52: 14; 53:3).
Face and Person
Face and Person are synonomous, not only by reason of the Greek etymology, but even more because there is nothing more personal, nothing more precious, nothing dearer than the face of a loved one. The psalmist’s cry, “I long to see Thy face” (Ps 26:8), is the cry of every lover to his beloved, the cry of child to parent, of parent to child, and of friend to friend. The most poignant moment in the rites of death and burial comes when the face of the deceased is covered for the last time. We cherish photographs of those we love, but what is a photograph without a face? The relationships that we call “heart to heart” never tire of the “face to face.”
Sins Against the Holy Face
The Holocaust that took place during the Second World War was, at the deepest level, an attempt to erase the dignity and uniqueness of each person, a sin against the Human Face of God, the Face of Christ mirrored in millions of Jewish faces. Every sin against the dignity of the human person is a sin against the Face of Christ. Every act of violence, irreverence, or scorn directed against the human person is a sin against the Face of Christ. The abortion that prevents a child’s face from seeing another human face in the light of day is a sin against the Face of Christ. Torture and cruel ridicule are sins against the Face of Christ. The hard, stony gaze that looks at a person without seeing him is a sin against the Face of Christ. The eyes that judge, the look that condemns, is a sin against the Face of Christ. The refusal to see Christ in the faces of the sick, the stranger, and the immigrant is a sin against His Holy Face.
Our Secret Sins in the Light of Thy Face
Reparation is the prayer that seeks to make whole what is fragmented by putting love where there is no love, by gazing with reverence upon what has been disdained, by allowing our eyes to rest on “One from whom men hide their faces” (Is 53:3). The extraordinary thing about the prayer of reparation is that it is healing not only for the one offended but for the offender as well. If by sin we offend the Face of Christ, by reparation to the Holy Face we are healed of our sins. “Thou has set our iniquities before thee,” says the psalmist, “our secret sins in the light of Thy face” (Ps 89:8).
The Eucharistic Face of Christ
The prayer of reparation is most at home in the presence of the Blessed Sacrament. The light that shines from the “Eucharistic Face of Christ” heals us sinners, and heals those against whom we have sinned. The love we bring to the Eucharistic Face of Christ reaches every human face. The prayer of reparation is the veil of Veronica lifted to the face of Christ in His Passion; it is the hand that seeks to wipe away every disfiguring stain of filth, of blood, and of tears.
Held in His Gaze
Mother Marie-Thérèse Bonnin, a French Benedictine of Jesus Crucified, remarked that nothing “repaired” her soul like the contemplation of the Holy Face. In 1940 she wrote, “I have need of prayer in the same way one has need of recuperating physically. Time passes quickly close to Him. It is not that I feel anything, it is enough to know that I am held in His gaze, enough to believe in His love.”
Reparation and Adoration
The beginning of Lent and today’s Feast of the Holy Face of Jesus invite us to a prayer of reparation and of adoration. “Look to him and be radiant; let your faces not be abashed” (Ps 33:6). The light that streams from the Face of Christ can make radiant every human face. Allow yourself to be held in His gaze. Believe in His love. Perseverance in the simple prayer of reparation means healing for ourselves and healing for the world.