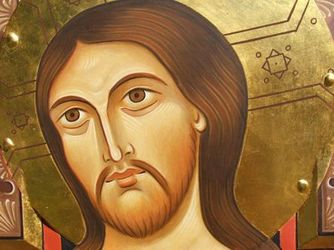 When it comes to Franciscan spirituality, I, being a son of Saint Benedict and an unworthy disciple of Blessed Abbot Marmion, lay claim to nothing other than ignorance. In spite of this, I thought that, in honour of Saint Francis of Assisi’s feast, I might share with the readers of Vultus Christi a few texts that illustrate the centrality of the Face of Christ to the Franciscan charism.

Saint Bonventure, the Seraphic Doctor, in his Tree of Life, contemplates the adorable Face of Christ:

That Face, venerated by the Patriarchs,
desire of the Angels,
delight of Heaven,
was defiled by spittle from vile mouths,
struck by the blows of the inhuman,
and so as to augment the mockery, was covered with a veil by the sacrilegious.
The Face of the Lord of all creation was struck
as though He were an abject slave.
And He, serene of Countenance speaking softly,
gently had admonished one of the servants of the High Priest who had struck Him:
“If I have spoken evil, tell Me where I have erred;
if however I have spoken the truth, why do you strike me?

In the Mystic Vine, the Seraphic Doctor writes:

Behold the Face of your Christ, O Christian soul,
and lift not your eyes without tears to His torments,
lift not your contrite heart without compassion
and behold how much affliction He endures, to seek you, to find you.
Open wide your eyes to behold the Face Of Jesus.
Hear Him attentively!
If ever in inexpressible suffering, He utter a word,
hide it when you have heard it
as the most precious treasure in the coffer of your heart.

The July-December 2005 issue of Il Volto dei Volti, the review of International Institute of Research on the Face of Christ, contained two articles on the Holy Face in the Franciscan tradition. The first, by Father Stefano Maria Manelli, F.I., is entitled Volto del Povero, Volto di Cristo. Father Stefano writes:

The crowning of the ascetical and mystical path of the Poverello of Assisi . . . happened on the mountain of La Verna: there on a rocky height, the bloody crucifixion signed even the body of Saint Francis as it had that of Jesus ‘poor and crucified.’ Thus did Saint Francis appear then, to the eyes of all, with the face of an authentic “repeater of Christ,” as Saint Bonaventure says, another genuine, and perhaps the most genuine, “repeater” of Jesus “poor and crucified.”

In the same issue, an article by Father Jacek Neumann, a spiritual father to the Poor Clares of Vesperbild in Germany, writes of “The Face of All Faces in the Spirituality of Clare of Assisi.”

Devotion to the adorable Face of Christ continues in Blessed Angela of Foligno, Saint Veronica Giuliani, and a multitude of other saints and mystics of the Seraphic Family. To my mind, however, the most telling indication of the centrality of the Holy Face to the Franciscan tradition is that the precious Holy Face of Manoppello, visited by Pope Benedict XVI on September 1, 2006, should remain entrusted to the humble sons of Saint Francis, the Capuchin Friars “of the Holy Face” who first received the sacred image in 1506.

A significant but little known fact is that on September 22, 1968, the day preceding his death, at dawn, Saint Pio of Pietrelcina appeared at Manoppello, in prayer before the Holy Face. Capuchin Father Domenico da Cese witnessed the miraculous bilocation. The following night Padre Pio died. Death is not improvised. One dies as one lives. Saint Pio’s “pilgrimage” to Manoppello on the eve of his death, confirms my intuition that there is a particular grace given to the children of the Seraphic Family to live and to die with their eyes fixed on the Holy Face of the Crucified.