Skip to content
HomeBlessed Virgin MaryFollow the Way of Beauty 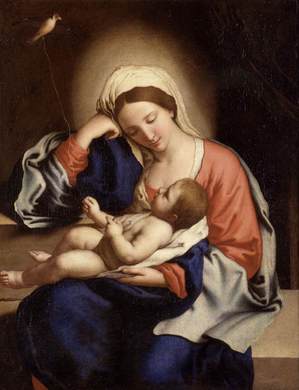 On 17 December 2010 Pope Benedict XVI addressed the Pontifical Academies during their 15th Public Session on “The Assumption of Mary, Sign of Consolation and Sure Hope.”
Shining Star of Light and Beauty
Mary, in fact, as Vatican Council II teaches in the dogmatic constitution “Lumen Gentium,” is the sign of sure hope and consolation for the People of God, pilgrim in history: “The mother of Jesus, now in heaven, glorified in body and soul, is the image and the first fruit of the Church which must have its fulfillment in the future age, and thus shines over the earth as a sign of sure hope and consolation for the People of God, journeying until it sees the day of the Lord (cf. 2 Peter 3:10)” (No. 68). In the encyclical letter “Spe Salvi,” dedicated to Christian hope, I could not help but remind of the particular role of Mary in supporting and guiding the way of believers toward the Heavenly homeland. I addressed her, invoking her as a Star of Hope for the Church and for the whole of humanity (cf. No. 49). Mary is the shining star of light and beauty, who proclaims and anticipates our future.
The Queen, God’s True Mother
St. John Damascene, who dedicated to Mary’s Assumption three magnificent sermons, given in Jerusalem around the year 740, in the place tradition indicates as Mary’s Tomb, said this: “Thy soul did not descend to Limbo, neither did thy flesh see corruption. Thy pure and spotless body was not left in the earth, but the abode of the Queen, of God’s true Mother, was fixed in the heavenly kingdom alone.” (Homily I on the Dormition: PG 96, 719).
Advocate and Mother of Mercy
The “singer of Mary,” St. Bernard of Clairvaux, along with many of the Latin West, echoes the previous voice of the Eastern Church, when St. Bernard evokes the Assumption thus: “Our Queen has preceded us; she has preceded us and has been received very festively, so that with confidence the servants can follow their Lady saying: Take us with you, we run in the odor of your perfumes (Ct 1,3). Our pilgrim humanity sent its Advocate ahead that, being Mother of the Judge and Mother of mercy, can treat with devotion and efficacy the cause of our salvation. Our earth has sent today to heaven a precious gift so that, giving and receiving, they join the human and the divine in a happy exchange of friendship, the earthly to the heavenly, the lowest to the highest […] She is the Queen of Heaven, she is merciful, she is the Mother of the Only-begotten Son of God” (In assumptione B.M.V., Sermo I: PL 183,415).
Theological, Mystical, Liturgical, Devotional Artistic
Hence, following that via pulchritudinis that the Servant of God Paul VI indicated as fecund itinerary of theological and Mariological research, I would like to note the profound syntony between theological and mystical thought, the liturgy, Marian devotion and the works of art that, with the splendor of colors and shapes, sing the mystery of the Assumption of Mary and her heavenly glory together with her Son. Among the latter, I invite you to admire two of them that are particularly significant in Rome: the mosaics of the apse of the Marian Basilicas of St. Mary Major and Santa Maria in Trastevere.
Theological and spiritual reflection, liturgy, Marian devotion, and artistic representation truly form a whole, a complete and effective message, capable of arousing the wonder of eyes, of touching the heart and of enticing the intelligence to a more profound understanding of the mystery of Mary in which we see our destiny reflected clearly and our hope proclaimed.
Therefore, I take advantage of this occasion to invite experts in theology and Mariology to follow the via pulchritudinis, and I hope that, also in our days, thanks to a greater collaboration between theologians, liturgists and artists, incisive and effective messages can be offered to the admiration and contemplation of all.