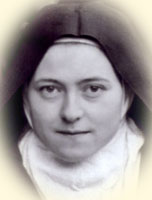 Thérèse is so often referred to as “little,” that we risk not seeing the breadth and depth that are really characteristic of her, and the immensity of her desires. Paradoxically, there is nothing small, nothing narrow in this painfully sensitive middle-class girl who, at fifteen years of age, closed herself up in Carmel with a certain number of saints, a certain number of women not altogether right in the head, her own sisters, and one rather unusual prioress. Once Thérèse opened herself to the workings of the Holy Spirit, her heart began to expand — even in the midst of real emotional, spiritual, and physical sufferings, — until it reached the dazzling dimensions of the charity of Christ.

In the beginning of her journey, Thérèse recognized herself in the classic lines of every feminine vocation: “To be your spouse, O Jesus, to be a Carmelite, to be, by virtue of my union with you, the mother of souls, this ought to be enough for me . . . but it is not so . . . I feel other vocations within myself . . . O my Jesus! To all these crazy aspirations of mine what will you reply? Today, you want to fulfill other desires of mine bigger than the universe.”

The liturgy, rather audaciously, applies the prophecy of Isaiah to Thérèse. “Rejoice with Jerusalem” becomes “Rejoice with Thérèse and be glad because of her, all you who love her” (Is 66:10). The passion of Thérèse was to love and to be loved. And love was given her. It rushed upon her like a river, invaded her like an overflowing torrent. She dared to open herself to immense desires, and God gave to her with immensity.

Many of us have loved Thérèse for a long time, loved her as a sister, a friend very close to us, someone capable of understanding both the little things that make up our day to day lives and the big things that weigh heavily on us at certain moments, testing our faith in love and causing hope’s little flame to flicker. We are all, I think, fond of repeating that promise of hers that has been translated into countless languages, and rightly so: “If the good God grants my desires, my heaven will be spent on earth even until the end of the world. Yes, I want to spend my heaven doing good on earth.”

If we are to share in the spiritual experience of Thérèse, it will not be by the hammer blows of a steel willpower, nor by dint of effort and striving, nor by a glorious record of victories. It is not by going up but rather by going down, by descending into the last holdouts of our weakness, into the emptiness of a terrible and magnificent poverty, that we will find ourselves with Thérèse in the peace of the weaned child on its mother’s lap (Ps 130:2).

There, in an intimacy open to the little, the broken, and the poor, and closed to everyone else, the Father surprises the friends of Thérèse with the mysteries of the kingdom hidden from the learned and the clever, and revealed to children (Lk 10:21). God waits for us, not on the summits of perfection with crown in hand to reward what we, of ourselves, may have done. He waits for us rather with all the tenderness of His motherly heart, exactly where we fall weak, bruised, humiliated, and reduced to powerlessness. Yes, we fall, but only to discover with amazement that it is into the bosom of the Father. There, in the gentleness of the Spirit, the Son waits to welcome us, saying, “Come to me, all who labour and are heavy laden, and I will give you rest” (Mt 11:28).

On the lips of Thérèse, this word — “Father” — learned from the lips of Jesus, was, in some way, reinvented for our times. On the lips of Thérèse, the word “Father” was rescued from the bland formulas of a piety past its expiration date, to be pronounced for our world and for our time with the radical newness of the Gospel. If we learn anything at all from this twenty-four year old Doctor of the Church, let it be this: to dare to say “Father” in the breath of the Holy Spirit, to dare to call God “Father” with the boldness of the little, the poor, and the half crazy, a boldness that shocks the custodians of a religion of convention and routine to speak the Gospel again to those who, hoping against all hope, believe in Love.

This homily was preached on October 1, 2001 to the Benedictines of Jesus Crucified at their Monastery of the Glorious Cross in Branford, Connecticut. Founded in 1930, these Benedictines count Saint Thérèse of the Child Jesus and of the Holy Face among their special patrons. The homily alludes to this relationship.

Many years ago, while reading the biography of Père Jean-Baptiste Muard, the founder of the Benedictine abbey of La-Pierre-Qui-Vire, I came upon a line that so struck me that I have never forgotten it. Père Muard said something like this: “It is not we who choose this saint or that to be our friend; it is, rather, the saints who choose those whom they wish to befriend. The saints choose us, and this, in the light of God’s wisdom and providence.”

The first of these has to do with the fundamental grace of Saint Thérèse: a boldness, the audacity that comes from the absolutely certainty of being loved. In the first Sisters, and in you, Thérèse sees women called to believe that they are loved. Her work is precisely this: to help those marked by suffering — Love’s signature — to believe that they are loved. “We know and believe the love God has for us” (1 Jn 4:16). Out of this grows an immense confidence, a boldness in the Spirit that authorizes even the weakest among us to see in the Child Jesus, a brother; and in the Holy Face of the suffering Jesus, the traits of a lover, the gaze of a spouse. This identification with the Child Jesus and, even more, with the Holy Face of Jesus, makes the friends of Thérèse bold, confident, audacious in their relationship with the Father. “Since you loved me so much,” says Thérèse in one of her prayers to the Father, “I beg you to look upon me only through the Face of Jesus.”

The second reason why Thérèse may have chosen the Congregation has to do with the missionary zeal of Saint Thérèse or, even better, with her uncontainable desire to love. In the first Sisters, and in you, Thérèse sees women with great aspirations, women with hearts made to love, women with love to give, women ready to mother the whole world, with a special tenderness for sinners, and for priests. “The love of Christ impels us” (2 Cor 5:14). Some of the first Sisters wanted to be missionaries; they did not choose the enclosed, monastic life. It was, in God’s mysterious designs, chosen for them. Thérèse, in her own way, says to each of us that the limitations of a body marked by the Cross are not an impediment to love, but a way to love. She says that monastic enclosure cannot contain the uncontainable; and love is, by its very nature, uncontainable.

The third reason why Thérèse may have chosen the Congregation has to do with her intense desire to live life to the full. Thérèse’s holiness is not of the “half-dead-half alive” variety. “I came that they may have life, and have it abundantly” (Jn 10:10). Her holiness is energetic, enterprising, and effective, precisely because it is a holiness of love, the most energetic, creative, effective force in the world. The first Sisters, and certainly not the unstoppable Mother Marie des Douleurs, were not women half-alive. Even the weakest Sisters, those most hemmed in, limited, and sometimes confined to bed for the better part of their monastic life, were women determined to live life to the full.

The spirit of the Congregation has never been one of listlessness, vague sentimentality, and ineffective dreaming. It has always been energetic, enterprising, and effective, and this because love is, by its very nature, ordered to the fullness of life. Thérèse has chosen the Congregation for a special relationship with her, but her friendship is by no mean limited to the Benedictines of Jesus Crucified.

Thérèse lavishes her friendship on all sorts of folks, with a particular fondness for sinners, for the lonely, the confused, and the desperate. She precipitates herself into the darkness of men and women who struggle, day after day, and night after night, to keep the flicker of hope alive in themselves. She is close to anyone who needs help believing that he or she is not only loveable, but loved — loved absolutely, unconditionally. She stands near those who are timid, and fearful. Thérèse is present in prison cells, and near hospital beds. She is in homes. She is interested in families, in human relationships, in situations of dire need and bewildering complexity.

Thérèse, from her place in heaven, is not intimidated by the spectre of evil, by the brutality and ugliness of what sin can do to human lives, twisting hearts, disfiguring faces, paralysing the energies of love. “I feel within myself, she wrote, the vocation of a warrior, of a priest, of an apostle, of a doctor, of a martyr . . . In spite of my littleness, I want to shine upon souls, like the prophets, like the Doctors.”

The liturgy takes the prophecy of Isaiah, and applies it to Thérèse. “Rejoice, Jerusalem,” becomes “Rejoice, Thérèse, and be glad for her, all you who love her” (Is 66:10). Thérese dared to believe in love. Love made her bold. Love dilated her heart, transformed her from a narrow-minded middle class Catholic girl into a Great Mother, unafraid to bring love into the darkest places of every human drama. Her work is not over. “I shall spend my heaven,” she said, doing good upon the earth.” “You will feel my soul close to yours.

It is time to go to the Holy Table. The Table will be set, not for the wise and the clever, but those who believe in love, for the bold, and the daring. The Table will be set for those who dare to say, ”Our Father.” If we learn anything from Thérèse, the twenty-four year old doctor of the Church who has chosen us to be her friends, let it be this: to utter “Father,” in the breath of the Holy Spirit, to call God “Father” with an audacity that shocks the conventional and the comfortable, and brings comfort to those who, hoping against hope, believe in Love.