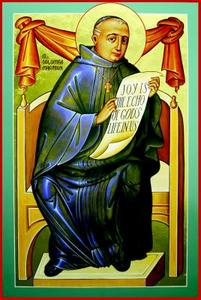 I have never made a secret of it: Blessed Abbot Marmion has been for me a spiritual master, a father, and a friend from the time I was fifteen years old. I am thrilled to see a new edition of his spiritual letters.
Zaccheus Press is pleased to announce the release of Union with God: Letters of Spiritual Direction by Blessed Columba Marmion.
One of Mother Teresa’s favorite books, Union with God is a collection of letters written by Blessed Columba Marmion to the many persons who sought his spiritual counsel — with questions about prayer, faith, temptation, suffering, and the struggles of daily life. Marmion excelled in the art of letter-writing — his advice was always simple and direct, yet profound. In his letters we see him bringing to bear his great depth of theological knowledge in a practical and human way.
Union with God: Letters of Spiritual Direction by Blessed Columba Marmion
ISBN 0-9725981-6-2
233 pages • $14.95 (paperback)
Read Father David L. Toups’ Foreward to the new edition of Union with God:

Union with God was first compiled ten years after Abbot Columba Marmion’s death in 1923, and then, as now, it brilliantly captures his insights into the spiritual life. This work is a collection of letters of spiritual direction which only can be described as being very simple yet very deep, encouraging childlike confidence in God as our loving Father. Blessed Columba’s letters simplify the complexities of life and helped his spiritual directees stay focused on what Jesus was asking of them in the present moment. His letters are effective, because he himself strove to live in attentiveness of God’s love and presence in his own daily life. Marmion is referred to as the “Doctor of Divine Adoption.” He emphasized that Christians are truly adopted children of God through baptism and are thus to abandon themselves into the loving hands of the Father at all times. To entrust oneself to the Father and model oneself on the life of Christ was everything to Dom Marmion.
Abbot Marmion’s writings were a staple of spirituality in the twentieth century for the generation preceding the Second Vatican Council. Recently, a resurgence of interest has been occurring, which recognizes that this master of spirituality has something profound to offer Christians today in the twenty-first century. He was dedicated to writing to his spiritual children and encouraging them in their struggles to keep moving forward on their journey of faith. He helped countless men and women draw ever closer to Christ.
It is well documented by classmates of Karol Woytyla, the future Pope John Paul II, that he was an avid reader of Marmion’s writings. Columba Marmion was beatified during the Jubilee Year 2000. In the homily at the beatification, Pope John Paul II stated: “May a widespread rediscovery of the spiritual writings of Blessed Columba Marmion help priests, religious and laity to grow in union with Christ and bear faithful witness to him through ardent love of God and generous service of their brothers and sisters.” This recognition by the Church Universal reveals not only Marmion’s personal sanctity, but also the profundity of his writings.
Blessed Teresa of Calcutta considered Union with God to be her favorite work from which she drew great solace. It should be no surprise that Marmion’s teaching of childlike trust in Divine Providence and abandonment to the will of the Father would find in Mother Teresa such a devotee. The entire order of the Missionaries of Charity continues to draw inspiration from Marmion’s works. Mother Teresa would quote from him extensively, even citing him in her original hand-written copy of the Constitutions of the Missionaries of Charity. In an early letter to her sisters dated 1961, she paraphrases Marmion: “Fidelity to the rule is the most precious and delicate flower of love we religious can offer to Almighty God.” In 1967 she wrote: “In reading Dom Marmion I find in him so much of what our Society expects of us, Holiness!” Marmion’s theme of joyfully persevering in the midst of struggles was Mother Teresa’s attitude for the order which she founded and to which she herself subscribed.
Marmion’s uncomplicated yet insightful wisdom, as found in the pages of this book, should be a gift for many in today’s seemingly complicated world. His very readable presentation of the gospel truths for everyday life is as relevant now as when it was first written. This work will edify all readers to be more faithful to Christ, to His Church, and to their vocation in life. There is encouragement in these pages to live as children of our loving Father and to be ever more faithful to Him in both the simple and the profound moments of life. The whole of the Christian life is to be one of union with God. The key for Dom Marmion was abandonment to the will of the Father in all things, doing all for the love of God.