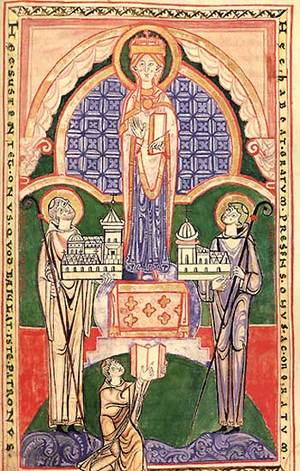 Pioneers of A Fresh Start
For Cistercians and Benedictines, January 26th is the feast of the Holy Abbots of Cîteaux, Robert, Alberic, and Stephen. They were the pioneers of a new beginning, men “careful to keep the unity of the Spirit in the bond of peace” (Eph 4:3). Saints Robert, Alberic, and Stephen were indomitable believers in the possibility of beginning again. When they went forth to start afresh at Cîteaux, they were already seasoned monks, “men truly wise” (ExC, I).
A New Beginning in Compunction
The account of their deliberations is given in the Exordium Parvum, a chronicle dating from about the year 1119: “Inspired by the grace of God, these men, while still living in Molesme, often spoke to each other, lamented, and were saddened by the transgression of the Rule of Saint Benedict, the Father of Monks” (ExP, III). Their new beginning was conceived in compunction. Every hope of starting afresh enters through a heart pierced by the Word and brought by the Holy Spirit to a godly sorrow.
They Came to Cîteaux

They realized that they themselves and the other monks had promised by a solemn vow to observe this Rule, yet they had by no means kept it; and therefore they had knowingly committed the sin of perjury (ExP, III).

They spoke amongst themselves and asked one another how they were to fulfill the verse: ‘I will fulfill my vows to you, vows which I made with my own lips’ (Ps 65:13-14). . . . After common deliberation together with the father of that monastery, Robert of blessed memory, twenty-one monks went out to try to carry out jointly what they had conceived with one spirit. Eventually . . . they came to Cîteaux, which was then a place of horror, a vast wilderness (ExP, I).

Exodus and Transitus
The exodus from Molesme to Cîteaux took place on Palm Sunday 1098, coinciding that year with the feast of the Transitus of Holy Father Benedict on March 21st. Every new beginning is at once an exodus a going forth, and a transitus, a passing-over: a reliving of the Paschal Mystery. This is as true of the many secret new beginnings prompted by grace as it is of the more visible ones.. To leave behind what is old — especially old hurts, resentments, and prejudices — is to seek God in poverty of spirit.

One Thing Is Necessary
Every new beginning demands a radical simplification, a stripping down. The Fathers of Cîteaux loved the Gospel of Martha and Mary and this, not only for the words of Jesus confirming Mary in her choice of the better part, but also for Jesus’; teaching on simplicity: “Martha, Martha, thou art careful, and art troubled about many things, but one thing is necessary” (Lk 10:41-42). The distinctively Marian virtues of poverty of spirit and simplicity go everywhere hand in hand, traveling companions for every new beginning.
Forward in Fidelity to Tradition
Saints Robert, Alberic, and Stephen show us that nothing impedes the grace of a new beginning more than a futile clinging to the dead weight of the past. At the same time they show us that nothing energizes a fresh start in Christ more than a singleminded and singlehearted fidelity to tradition. The grace of a new beginning is held out to us at every moment. Even when we no longer believe in the possibility of a new beginning for ourselves, God remains relentlessly optimistic. His mercy is inexhaustibly inventive; at every moment he holds out the grace of a new beginning. In this is all our hope. It is possible to begin again. It is possible to “start afresh from Christ.” It is possible, as Saint Paul says, to press on, “forgetting the things that are behind, and stretching forth myself to those that are before” (Phil 3:13).
Of One Mind in His House
Saints Robert, Alberic, and Stephen started afresh, “poor with the poor Christ” (ExP, XV), “the true King” (RB Pro:3). Our Lord tells us that, “a house divided against itself will not be able to stand” (Mk 3:25). May he give us, by the grace of the Holy Spirit to be “of one mind in his house” (Ps 67:7) and to start afresh today, “resting our hope in God” (RB 4:41).