Commemoration of Blessed Marie de Jésus Deluil Martiny, Virgin
Although today is Sexagesima Sunday, I cannot let it pass without remembering Blessed Marie de Jésus, a woman whose charism of Eucharistic adoration, reparation, and zeal for the sanctification of priests makes her a significant figure for the Monastery of our Lady of the Cenacle.
Adoration, Reparation, and Spiritual Motherhood
Blessed Marie de Jésus Deluil Martiny (1841-1884) shines among the models of holiness proposed in the Congregation for the Clergy’s remarkable Letter of 8 December 2007, Adoration, Reparation, and Spiritual Mother for Priests. Her liturgical commemoration today marks her bloody martyrdom at the hands of a French anarchist, on 27 February 1884.
Zélatrice of the Sacred Heart
Blessed Marie de Jésus was graced with a burning awareness of the Real Presence of Our Lord in the Sacrament of His Love. So ardent was her zeal to draw souls close to the Heart of Him who draws near to us in the Blessed Sacrament, that she became known, while yet a young woman living in the world, as the Zélatrice of the Sacred Heart.
The Guard of Honour of the Sacred Heart
Even before founding the Congregation of the Daughters of the Heart of Jesus, Marie Deluil Martiny spent herself promoting a movement known as the Guard of Honour of the Sacred Heart. The movement still exists today with its international headquarters at the Visitation Monastery in Paray-le-Monial, France.
The Divine Wound
Marie de Jésus explained the movement in these words:
“The Guard [of Honour of the Sacred Heart], the Work in itself, was placed by the Infinite Love of our Master at the entrance of the Wound of His Divine Heart. There, it calls souls, unites them, calls them together, preaches to them, if one may say so, pushes them, and draws them into the interior of the Divine Wound . . . it leads them there, and introduces them therein, after having, so to speak, opened to them the door of this sacred refuge . . . Souls, entering this safe abode are sprinkled, washed, whitened, purified, healed, and supernaturalized by a most efficacious application of the Blood and Water that came forth from the Divine Wound.
But Jesus wants even more: this is the new step that Our Lord desires to make the souls He has chosen to this end take: they must enter by the gate of the City of God, that is into the Heart of Jesus by the Divine Wound; therein will be their world, their dwelling, their place of rest.”
The Daughters of the Heart of Jesus
The second phase of Marie Deluil Martiny’s life was a flowering of the first. After a long preparation in prayer, she opened the first house of the Society of the Daughters of the Heart of Jesus at Berchem near Anvers in Belgium on June 20, 1873. The new foundation was characterized by a burning desire to console the Heart of Jesus, and by a mystical participation in His victimal priesthood, patterned after that of His Holy Mother at the foot of the Cross. 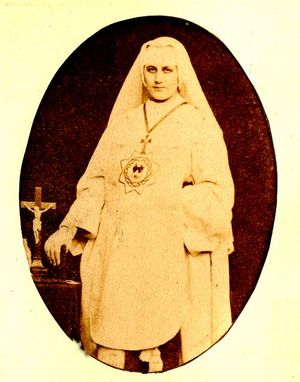 Divine Jealousy for Sacerdotal and Consecrated Souls
Mother Marie de Jésus wrote: “They will live from that life of suffering love that was the intimate life of the Heart of Jesus; they will penetrate the most tender secrets of His love: the Eucharist, the Church, His divine jealousy for sacerdotal and consecrated souls.”
Priests: Sacrificers and Victims
“What a calling! The Work must give to Christ souls who offer themselves as a sacrifice of Love, these will be “the victims of Love that Jesus asks for,” by the Holy Eucharist. The Host has become indispensable to my life; I should wish never to leave it for the sake of sacerdotal souls [priests]. Too many of them are satisfied with being Sacrificers and exercise their sacred functions without steeping them enough in the Priestly Spirit, that is, without themselves becoming truly Victims at the same times as Sacrificers, and so God wills that legions of souls who are truly Victims offer themselves as humble supplements for what certain priests are lacking in the Priestly Spirit. Their example is Mary, the Mother of Jesus.”
Offering for Priests
“To offer yourself for souls is beautiful and great,” wrote Mother Deluil Martiny, “but to offer yourself for the souls of priests is so beautiful, so great, that you would have to have a thousand lives and offer your heart a thousand times. . . . I would gladly give my life if only Christ could find in priests what he is expecting from them. I would gladly give it even if just one of them could perfectly realize God’s divine plan for him.”
The Blessed Virgin Mary United to the Victimal Priesthood of Her Son
Marie Deluil Martiny presents the Blessed Virgin Mary as the Mother of Christ the Victim Priest and of all who are called to follow Him in the way of His Victimal Priesthood. By her most intimate and perfect participation in the Victimal Priesthood of her Son, the Blessed Virgin Mary is both Coredemptrix and Mediatrix. She is the Virgo sacerdotalis, sacerdotal, not by virtue of sacramental ordination, but by virtue of her unique and entire adhesion to the Sacrifice of Christ.
Violent Death and Glory
When on February 27, 1884, Mother Marie de Jésus was murdered in the garden of the monastery she had founded at La Servianne, her family property, her last words were, “I forgive him . . . for the Work, for the Work for Priests,” that is, for the Institute she founded.
“Our Lord,” she said, “has put into my soul that the souls of the future institute will be like that parcel of the Host that melts in the chalice; they will all melt and disappear in the Blood of Jesus.” The Congregation she founded, the Daughters of the Heart of Jesus, continue her charism of liturgical prayer, reparation, and adoration, with a particular maternal solicitude for priests. Pope John Paul II beatified Mother Marie de Jésus Deluil Martiny on October 22, 1989.