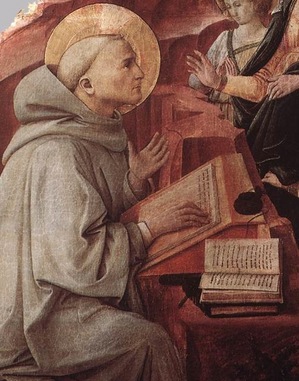 At Matins this morning the Second Reading was from our incomparable Saint Bernard. The titles in boldface and the comments in italics are mine.
History’s Vesper Hour
It is now fitting that we should consider the time of our Lord’s coming.
He came, as you know, not in the beginning, nor in the midst of time, but in the end of it. This was no unsuitable choice, but a truly wise dispensation of His infinite wisdom, that He might afford help when He saw it was most needed. Truly, ” it was evening, and the day was far spent ” (Lk 24:29); the sun of justice had well nigh set, and but a faint ray of his light and heat remained on earth.
Isn’t it extraordinary how Saint Bernard relates the Emmaus story (Lk 24:29) to the end of time? This, in turn, must be related to the theme of our current Vespers hymn, Conditor Alme Siderum: the Word becomes flesh in the vespertide of history:
Vergente mundi vespere,
Uti sponsus de thalamo,
Egressus honestissima,
Virginis matris clausula.
Earth waning to her vesper hour,
He like a bridegroom from his bower,
His Virgin Mother’s spotless shrine,
Came forth in dignity divine.
Note too that Saint Bernard draws upon Psalm 18:5-6 (Caeli ennarrent) for his imagery of the sun, and of its light and heat.
As Iniquity Abounded, the Fervour of Charity Had Grown Cold
The light of Divine knowledge was very small,
and as iniquity abounded, the fervour of charity had grown cold.
No angel appeared, no prophet spoke.
The angelic vision and the prophetic spirit alike had passed away,
both hopelessly baffled by the exceeding obduracy and obstinacy of mankind.
The Collect for the feast of the Stigmata of Saint Francis (September 17th) makes use of Saint Bernard’s expression: “the fervour of charity had grown cold.” Iniquity so abounded on earth, he says that the angels and the prophets themselves are hopeless baffled by mankind’s exceeding obduracy and obstinacy. His description of the global situation on the eve of the Incarnation fits the global situation today. 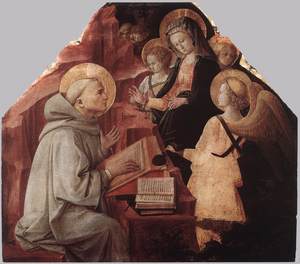 Plenitude and Affluence of Things Temporal
Then it was that the Son of God said : ” Behold, I come” (Heb 10:7).
And “while all things were in quiet silence, and the night was in the midst of her course, the Almighty Word leaped down from heaven from thy royal throne” (Wis 18:14-15).
Of this coming the Apostle speaks :
“When the fullness of time was come, God sent his Son” (Gal 4:4).
The plenitude and affluence of things temporal had brought on the oblivion and penury of things eternal.
Fitly, therefore, did the Eternal God come when things of time were reigning supreme.
“The plenitude and affluence of things temporal had brought on the oblivion and penury of things eternal.” Not long ago I was talking with a friend in Ireland. She said that Ireland’s economic boom (now in recession) and unprecedented prosperity had, in fact, led to — and here I again use Saint Bernard’s words — “the oblivion and penury of things eternal.” This is true, of course, not only of Ireland, but of any society sated by “the plenitude and affluence of things temporal.” Man is, alas, all too often driven to God only when, out of a salutary want, or even misery, he experiences his radical dependence upon Him.
He Comes Daily and Invisibly to Work Our Salvation
As He once came visibly in the body to work our salvation in the midst of the earth,
so does He come daily invisibly and in spirit to work the salvation of each individual soul ; as it is written : ” The Spirit before our face, Christ the Lord.”
And that we might know this spiritual advent to be hidden, it is said :
” Under his shadow we shall live among the Gentiles” (Lam 4:20).
This is one of Saint Bernard’s cherished motifs, probably because it so corresponds to his own experience of “being visited by the Word.” The Word continues His advent and renews it in one soul after another, visiting us by His grace in the shadow and obscurity of faith’s dark night.
At Least Raise Your Head
Wherefore, if the infirm cannot go far to meet this great Physician,
it is at least becoming they should endeavour to raise their heads
and lift themselves a little to greet their Saviour.
What a touching image Saint Bernard gives us here! The sinsick soul is compared to someone who is weakened by illness and confined to bed. So feeble is he that, when the physician comes, he cannot get out of bed to greet him. He cannot even raise himself enough to sit on the edge of the bed. He can do no more than lift his head a little from his pillow. This is all Our Lord asks of us. If you cannot go to the door to greet Him, it is enough that you should raise your head a little. That mere token of openness to divine grace is enough to set in motion the process of interior healing.
Turn Within Thyself to Meet Thy God
For this, O man, you are not required to cross the sea,
to penetrate the clouds, to scale the mountain-tops.
No lofty way is set before you.
Turn within thyself to meet thy God,
for the Word is nigh in thy mouth and in thy heart (Dt 30:14).
Conversion — turning Godward — is a very simple interior movement made possible by prevenient grace. The Word, says Saint Bernard, quoting Deuteuronomy 3:14, “is very nigh unto thee, in thy mouth and in thy heart.” Nothing hard or rigourous is required; the pietas (fatherly devotedness) of God is such that He does everything to facilitate our conversion toward Him.
Compunction and Confession
Meet Him by compunction of heart and by confession of mouth,
or, at least, go forth from the corruption of a sinful conscience,
for it is not becoming
that the Author of purity should enter there.
And this is said concerning that advent by which He will deign to illumine
every soul with an invisible power.
For Saint Bernard there are two ways of going forth from the stinking rot of a sinful conscience. The first is by way of compunction: the blessed sorrow for sin experienced when one is pierced through by the Word. The second is by way of confession: auricular, sacramental confession. Then, the soul is fit to welcome the Author of purity who enters her by means of the adorable Sacrament of His Body and Blood.