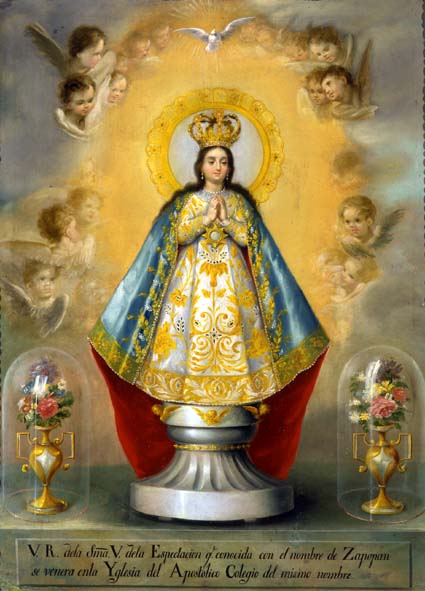 Monsignor Patrick Brankin was kind enough to remind me that the Basilica of Nuestra Señora de Zapopan in Guadalajara, Jalisco, Mexico is dedicated to the Blessed Virgin Mary under the title of Our Lady of the Expectation. The same Little Virgin is venerated at the Shrine of Saint Thérèse in Collinsville, Oklahoma. 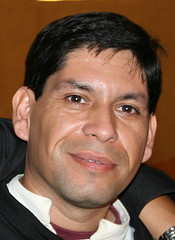 Santa Croce in Gerusalemme has a small monastic foundation in Guadalajara. One of the three solemnly professed monks there is my very dear friend, Fra Leone Maria. Fra Leone has a personal devotion to Nuestra Señora de la Expectacíon of Zapopan; his family has their own precious image of the diminutive and much loved Virgin. He had a picture of her in his cell at Santa Croce in Rome.
Shortly after the conquistador Francisco de Bobadilla founded Tzapopa (later called Zapopan) in 1541, Franciscan friars arrived to evangelize the native population. Fray Antonio of Segovia arrived carrying in one hand a crucifix and, in the other, a little statue of the Blessed Virgin Mary. The statue gave off sparks of heavenly light. The Indians, fascinated and subjugated by the Virgin Mother of Jesus, ceased their resistance and accepted the Gospel.
The Little Virgin won the hearts of the people of Zapopan by granting them abundant graces and miracles. In the mid-1600s, the bishop fixed her feast on December 18th, conferring on the statue the title of Nuestra Señora de la O or de la Expectacíon. It became customary to transfer the statue to Guadalajara in times of special need or crisis. Even today, the Little Virgin spends part of the year, from June 13th to October 5th in Guadalajara. Our Lady of Zapopan is the patroness of the state of Jalisco. On January 18, 1921 she was solemnly crowned.
The statue, made of wood, is very small: just a little over 13 inches tall. Our Lady’s tunic is an earthy red and her mantle is blue. She stands on the crescent moon, just as she does at Guadalupe, and her hands are folded in prayer, just as they are at Guadalupe. It is customary to dress the statue in gorgeous clothes. The Little Virgin wears a wig and a golden crown set with jewels. A little reliquary containing an image of the Child Jesus is suspended below her breast. This is reminiscent of the Byzantine icons of Our Lady of the Sign.
Join with me in wishing Fra Leone and the community of the monastery of Santa Cruz of Guadalajara a very blessed feast of Nuestra Señora de la Expectacíon.