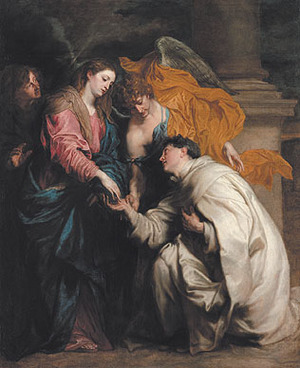 Another Joseph
Reading the Martyrology this morning I discovered that today is the dies natalis of Saint Hermann Joseph, one of my cherished heavenly friends and models. I related this anniversary to a question put to me today by another good friend, this one earthly — the irrepressible Jeron: “How does one keep the Blessed Mother company?” Saint Hermann Joseph shows us how. Hermann Joseph, a twelfth century Premonstratensian Canon, lived in such intimacy with the Virgin Mary that his relationship with her was compared to that of Saint Joseph, her most chaste spouse.
Her Chaplain and Her Spouse
The Catholic Encyclopedia says that, “After Hermann had been ordained priest, it was remarkable with what reverence and devotion he offered the Holy Sacrifice. He was known for his gentle demeanour and affability, his humility, his extraordinary mortifications, but, above all, for his affection for the Mother of God, before whose altar he remained for hours in pious intercourse and ecstatic visions, and in whose honour he composed wonderful prayers and hymns. Mary, in turn, showed him her predilection, called him her chaplain and her spouse, and confirmed his surname Joseph, given to him by his brothers in religion. Hermann was sometimes sent out to perform pastoral duties and was in frequent demand for the making and repairing of clocks. He had under his charge the spiritual welfare of the Cistercian nuns at Hoven near Zulpich. Here he died and was buried in the cloister.”
He Took Her to His Own
Keeping company with the Blessed Virgin Mary has to do with living in her presence. One who shares with the Mother of Jesus every moment of his day and night, keeping no secrets from her and confiding every struggle, every sorrow, and every joy to her Immaculate Heart becomes a companion of Mary, walking in the footsteps of Saint Joseph, and of Saint John the Beloved Disciple. We read in John 19:26-27:
“When Jesus therefore had seen his mother and the disciple standing whom he loved, he saith to his mother: Woman, behold thy son. After that, he saith to the disciple: Behold thy mother. And from that hour, the disciple took her to his own.”
A Blessed Risk
“The disciple took her to his own.” There you have it, dear Jeron. Take Mary to your own; that means, into everything that is yours. No secrets. No compartments. No mental reservation. There is, of course, a blessed risk in doing this. Once Mary is taken “to one’s own,” she sets about setting all things in order. She cleanses. She beautifies. She turns all things to the glory of her Son.
Little Practices
There are humble little practices that can concretize the heart’s desire to keep company with Our Lady. I recommend having a special image of the Blessed Virgin in a prominent place. Whenever you pass by that image, kiss it, say an Ave, say with Pope John Paul II, Totus tuus, “I am all thine.” (Jeron knows how much I love the icon of Our Mother of Perpetual Help. It is my favourite image of the Queen and Mother of Mercy who is to me life, sweetness, and hope.) Saint Alphonsus Liguori recommends a daily visit to the Madonna. It is enough to kneel before her image, or sit quietly in her company saying one Ave after another. It goes without saying that the Rosary leads to the highest Marian contemplation, that is, to an abiding awareness of living in the company of the Blessed Virgin.
Total Consecration
Whatever little practices you adopt, persevere in them with the freedom born of love. The “great act” that contextualizes every other expression of Marian devotion is total consecration to Mary. For this, there is no better school than that of Saint Louis Marie Grignion de Montfort. Our Immaculate Mother desires nothing more than to gather us to her Heart. She offers us the grace of her company.