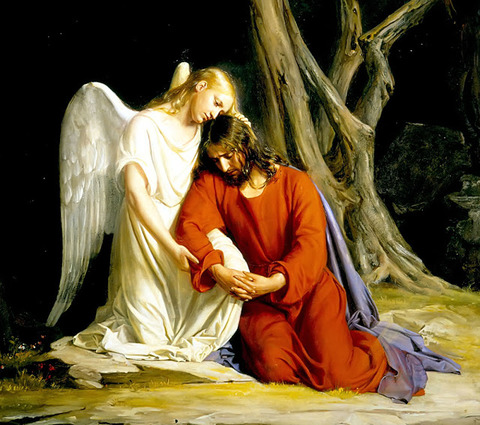 In the garden,
His Face was unseen,
for the eyes of His friends had grown heavy with sleep,
and there was none to meet the gaze of the Sorrowing Son
other than the Sorrowing Father
and the Consoling Angel whom He had sent
to wipe His brow,
to caress His head
and, for a moment, to hold His hand.
This the Sorrowing Mother would have done
had she been there,
but even that was denied her.
The Mother was replaced by an Angel!
The consolation that only she could have given
was given by another,
and yet He knew the difference:
though sweet, it was an angel’s, not a mother’s.
Weeping like Eve outside the garden,
she consented to the bitter Chalice:
“Be it done unto me as to your Word!”
Chosen for this, she elected to remain
cloistered in the Father’s Will,
hidden and veiled in grief,
to drink there of the Chalice of her Son, the Priest,
and savour it, bitter against the palate of her soul,
for nought can taste a child’s suffering
like a mother’s palate.
Then the Angel too was gone
and the Father hid behind the veil of blood and of tears,
leaving the Son alone with His sorrow
and with His fear,
to proceed with the Sacrifice:
the priest on the way to the altar
with the chalice already in his hands.