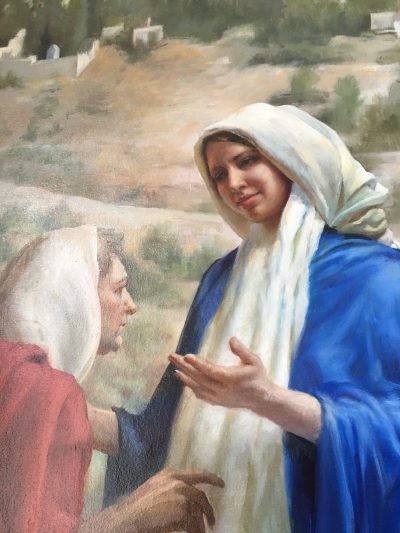 4 Jan. 5 May. 4 Sept.
Having our loins, therefore, girded with faith and the performance of good works, let us walk in His paths by the guidance of the Gospel, that we may deserve to see Him Who hath called us to His kingdom. And if we wish to dwell in the tabernacle of His kingdom, we shall by no means reach it unless we run thither by our good deeds. But let us ask the Lord with the Prophet, saying to Him: “Lord, who shall dwell in Thy tabernacle, or who shall rest upon Thy holy hill?” After this question, brethren, let us hear the Lord answering, and shewing to us the way to His tabernacle, and saying: “He that walketh without stain and worketh justice: he that speaketh truth in his heart, that hath not done guile with his tongue: he that hath done no evil to his neighbour, and hath not taken up a reproach against his neighbour:” he that hath brought the malignant evil one to naught, casting him out of his heart with all his suggestions, and hath taken his bad thoughts, while they were yet young, and dashed them down upon the (Rock) Christ. These are they, who fearing the Lord, are not puffed up with their own good works, but knowing that the good which is in them cometh not from themselves but from the Lord, magnify the Lord Who worketh in them, saying with the Prophet: “Not unto us, O Lord, not unto us, but unto Thy Name give the glory.” So the Apostle Paul imputed nothing of his preaching to himself, but said: “By the grace of God I am what I am.” And again he saith:  “He that glorieth, let him glory in the Lord.”

The passage that holds my attention in today’s appointed reading from the Prologue is this:

These are they, who fearing the Lord, are not puffed up with their own good works, but knowing that the good which is in them cometh not from themselves but from the Lord, magnify the Lord Who worketh in them, saying with the Prophet: “Not unto us, O Lord, not unto us, but unto Thy Name give the glory.”

Many years ago, I think it was in the 1970s, I was translating a certain text when a sentence leapt off the page and lodged itself in my memory, not in photographic way, but by way of its essential message. It said something like this: Humility is not self–depreciation; it is rather the fruit of our adoration. True humility begins not by looking at oneself, but by looking at God; not in considering what one has done or failed to do, but in confessing what God has done; not in focusing on all that one lacks, but in focusing on all that God gives. In the language of the Bible, to “fear the Lord” and to “adore the Lord” are very close, if not nearly synonymous. One who fears God is penetrated with awareness of the holiness of God; this compels him to fall down in adoration, even as the psalmist says:

Come let us adore and fall down: and weep before the Lord that made us. (Psalm 94:6)

One who adores God will, necessarily, become humble. One who shrinks from adoration will, if he persists in this, find himself imprisoned in the hard shell of pride, a shell impenetrable even to divine grace. The man who adores is not puffed up with his own works; he sees that any good in him comes not from himself, but from the Lord. All that he receives from God, he is quick to give back to God, holding on to nothing, spending everything, and saying with the Apostle all the while:

I count all things to be but loss for the excellent knowledge of Jesus Christ my Lord; for whom I have suffered the loss of all things, and count them but as dung, that I may gain Christ. (Philippians 3:8)

A man does not adore God because he is humble; he is humble because he adores God. Many things become clear in the light of the face of God. The psalmist says it: “Thou hast set our iniquities before thy eyes: our life in the light of thy countenance.” (Psalm 89:8). The humble man, that is, the man who adores God, begins to see himself as he is. All the illusions he had about himself begin to fall away. He says, “I thought myself virtuous; now I see myself full of vices. I thought myself spiritually rich; now I see that I am miserably poor. I thought myself gifted with lofty insights; now confess that I know nothing. I thought myself strong; now I see that I am beset by every weakness”. Such a man knows that, like the Apostle, he can glory in nothing but his infirmity. When a man wakes to the light of the presence of God — and this normally happens in the monastic life, not once, but again and again — he sees himself as he is; he sees his sins, his refusals, his hardness of heart. At length, he begins to understand what Saint Thérèse says in her Act of Oblation to Merciful Love:

In the evening of this life, I shall appear before You with empty hands, for I do not ask You, Lord, to count my works. All our justice is stained in Your eyes.

Saint Thérèse took her image from the prophet Isaias:

And we are all become as one unclean, and all our justices as the rag of a menstruous woman: and we have all fallen as a leaf, and our iniquities, like the wind, have taken us away. (Isaias 64:6)

Once a man, illumined by the experience of God in adoration, accepts his infirmity, he can move to the next step, which is to make it all over to God. Infirmity becomes scope for the deployment of the grace of Christ. “I cast before Thee all my vices. I present Thee with my poverty. I offer Thee my ignorance. I bring Thee my weakness.” In this way all our deficits become advantages. The more a man is empty of self, the more he is open to grace. Saint Paul says it:

More than ever, then, I delight to boast of the weaknesses that humiliate me, so that the strength of Christ may enshrine itself in me. I am well content with these humiliations of mine, with the insults, the hardships, the persecutions, the times of difficulty I undergo for Christ; when I am weakest, then I am strongest of all. (2 Corinthians 12:9–10)

This is where a man can begin to join the Blessed Virgin Mary in her Magnificat. It is a glorious thing to encounter this phrase in the Prologue: operantem in se Dominum magnificant. It is this luminous little phrase that suggests that, here too, Our Lady is the Regula Monachorum, the very mirror of monks:

Knowing that the good which is in them cometh not from themselves but from the Lord, they magnify the Lord Who worketh in them, saying with the Prophet: “Not unto us, O Lord, not unto us, but unto Thy Name give the glory.”

The repetition of the Magnificat every eventide allows a monk to pass from himself, as he is, to God, as He is. Saint Ambrose says: “Let Mary’s soul be in each of you to proclaim the greatness of the Lord. Let her spirit be in each to rejoice in the Lord” (Commentary on Saint Luke). One who adores God, will cast himself down in humility. One who casts himself down in humility will be lifted up by God. And one whom God lifts up cannot but praise Him:

And Mary said: My soul doth magnify the Lord.
And my spirit hath rejoiced in God my Saviour.
Because he hath regarded the humility of his handmaid;
for behold from henceforth all generations shall call me blessed.
Because he that is mighty, hath done great things to me; and holy is his name.
And his mercy is from generation unto generations, to them that fear him.
He hath shewed might in his arm: he hath scattered the proud in the conceit of their heart.
He hath put down the mighty from their seat, and hath exalted the humble.
He hath filled the hungry with good things; and the rich he hath sent empty away.
He hath received Israel his servant, being mindful of his mercy:
As he spoke to our fathers, to Abraham and to his seed for ever.
(Luke 1:46–55)