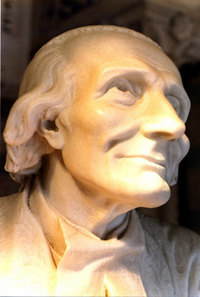 A huge thank you to Sandro Magister for providing readers with the Holy Father’s six Holy Week homilies. His homily at the Mass of Chrism on Holy Thursday captivated me. My own comments are in italics.

The Essence of the Priestly Ministry

At the same time, Holy Thursday is for us an opportunity to ask ourselves again: To what did we say “yes”? What is this “being a priest of Jesus Christ”? Canon II of our missal, which was probably composed in Rome before the end of the second century, describes the essence of the priestly ministry with the words that, in the book of Deuteronomy (18:5,7), described the essence of the Old Testament priesthood: astare coram te et tibi ministrare.

Pope Benedict XVI goes to the heart of the question. What is the essence of the priestly ministry? He answers it with words drawn from the Sacred Liturgy itself: “astare coram te et tibi ministrare” — to stand before Thee and worship in Thy presence. The priest is one who faces God and waits upon Him. The priest is the eyes of the world fixed upon God, and the hands of the world lifted up in worship before Him. The priest lives his priesthood most intensely when standing before the altar.

Standing Before the Lord

Two functions, therefore, define the essence of the ministerial priesthood: in the first place, “standing before the Lord.” In the book of Deuteronomy, this should be interpreted in the context of the previous dispensation, according to which the priests did not receive any portion of the Holy Land – they lived by God, and for God. They did not attend to the usual work necessary for sustaining daily life. Their profession was “to stand before the Lord” – looking to Him, living for Him. Thus, all told, the word indicated a life lived in the presence of God, and thus also a ministry in representation of others.

The priest lives by God, and for God. A young disciple of Blessed Abbot Marmion, Dom Pie de Hemptinne, O.S.B., said something similar; reflecting on his own priesthood, the young Benedictine said that he lived “by the altar, and for the altar.” Pope Benedict XVI emphasizes the mediatorship of the priest. The priest lives in the presence of God as the representative of all his brothers; he serves in the sanctuary on behalf of all who, in some sense, stand behind him.

To Keep the World Open to God

Just as the others cultivated the land, from which the priest also lived, so he kept the world open to God, he had to live with his gaze turned to Him. If these words are now found in the Canon of the Mass immediately after the consecration of the gifts, after the entry of the Lord among the assembly gathered in prayer, then they indicate for us the standing before the Lord who is present; it indicates, that is, the Eucharist as the center of the priestly life. 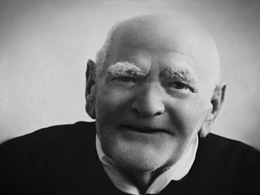 This is brilliant. The priest is a man who “keeps the world open to God.” The priest lives “with his gaze turned to God.” Underlying these observations is the Holy Father’s desire to see restored the traditional position of the priest during the Eucharistic Prayer. The “closed circle” of “versus populum” celebrations is, I think, directly linked to the current crisis in priestly spirituality. When the priest, standing at the altar, faces the crucifix, he offers his own body to “keep the world open to God.” By not looking at the people during the Holy Mysteries, the priest exemplifies for them that, “being risen with Christ,” they are called to “lift their thoughts above, where Christ now seats at the right hand of God” (Col 3:1).

But even here its impact goes further. In the hymn that, during Lent, introduces the Office of Readings – the office that the monks used to pray during the hour of the nocturnal vigil before God, and for the sake of men – one of the tasks of Lent is described in the imperative: arctius perstemus in custodia – let us be watchful with greater intensity. In the tradition of Syriac monasticism, the monks were described as “those who stand on their feet”; standing on one’s feet was an expression of vigilance. What was here considered as the task of the monks, we can reasonably view as being also an expression of the priestly mission, and as a correct interpretation of the words of Deuteronomy: the priest must be one who watches.

Pope Benedict XVI understands that there is no opposition between the monastic vocation and the priestly one. He goes so far as to say that “what was here considered as the task of monks, we can reasonably view as being also an expression of the priestly mission.” “The priest,” he says, “must be one who watches.” How can we not recall the vigils of Saint Jean-Marie Vianney before the altar of the parish church of Ars, the prolonged adorations of Saint Peter Julian Eymard before the Blessed Sacrament exposed in the monstrance, and the passion of Saint Gaetano Catanoso (photo above) for keeping watch before the Eucharistic Face of Christ?

Last October 16th, for the feast of Saint Margaret Mary Alacoque, I had the privilege of being in Paray-le-Monial. While there I encountered a brother priest who shared with me something of his own experience of keeping watch in prayer during the night. This priest found in nocturnal adoration a spiritual refreshment and an intimacy with Christ that he found at no other time. The priest, like the monk, is a watchman, for the sake of the people entrusted to his care.

He must stand guard before the relentless powers of evil. He must keep the world awake to God. He must be one who stands on his feet: upright in the face of the currents of the time. Upright in the truth. Upright in his commitment to goodness. Standing before the Lord must always be, in its inmost depths, also a lifting up of men to the Lord, who, in turn, lifts all of us up to the Father. And it must be a lifting up of Him, of Christ, of his word, of his truth, of his love. The priest must be upright, unwavering and ready even to suffer outrage for the sake of the Lord, as shown in the Acts of the Apostles: they “[rejoiced] that they had been found worthy to suffer dishonor for the sake of the name” (5:41).

The Holy Father is lucid when it comes to the reality of spiritual combat with the powers of darkness. I find the suppression of the Short Lesson at the beginning of Compline in the reformed Liturgy of the Hours most unfortunate. It is a text that every priest needs to repeat and hear nightly: “Brethren, be sober, and watch well; the devil, who is your enemy, goes about roaring like a lion, to find his prey, but you, grounded in the faith, must face him boldly” (1 P 5:8-9).

Pope Benedict XVI dares to close the gap between the so called “monastic” and “priestly” spiritualities. The “monastic” dimension of the diocesan priesthood becomes apparent to all who take the Holy Father’s teaching to heart. It was, I think, precisely the evacuation of “monastic” values from priestly spirituality that contributed in no small measure to the present crisis in priestly life and in vocations. “Listen, you that have ears, to the message the Spirit has for the churches” (Ap 2:7).