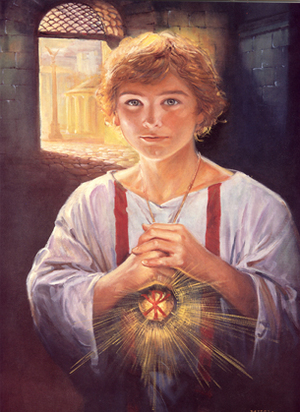 This is the image of Saint Tarcisius that I brought back with from the catacombs of San Sebastiano in Rome. Back in the 1950s and early 60s, Saint Tarcisius was presented to Catholic schoolboys as a model of courageous love for the Blessed Sacrament.
Making A Visit
Terry had an excellent post recently in which in talked about something distinctively Catholic: “making a visit.” Just a few generations ago this expression was current in Catholic culture. When, in passing in front of a church, one would say, “Let’s make a visit,” it was understood that one was proposing a visit to Our Lord in the Blessed Sacrament.
Walking Downtown
As a little boy I would sometimes walk “downtown” with my (Irish) grandmother. Halfway there we would come to Saint Patrick’s Church on Grand Avenue. Grandma would say, “Let’s make a visit,” and in we would go. On hot summer days the church was a dark, cool place. A red sanctuary lamped burned near the altar. We knew that Jesus was there. There was comfort in visiting Him in His house. Sometimes we would light a candle. After a few moments in prayer we would resume our walk. This was the kind of experience that marks a child for life.
After School
It was not uncommon for children to visit the Blessed Sacrament after school. Yes, it is true that the teaching Sisters encouraged visits, but it was something that children did freely. In the context of a family neighbourhood where nearly everyone walked to the bank, the Post Office, and the market, visits to the Blessed Sacrament were simply part of the fabric of Catholic life. Rarely were our neighbourhood churches empty. Nearly always there was someone kneeling in prayer, lighting candles, stopping at Our Lady’s altar, or making the Way of the Cross. Then came the so-called “urban renewal,” the destruction of so many family neighbourhoods, and the so-called “post-conciliar renewal,” of which enough has been said elsewhere in the blogosphere.

Sacrament of the Divine Friendship
The Eucharist is the sacrament of Our Lord’s Divine Friendship. He desires that His priests should be the first to experience this for themselves. He waits for His priests to come to Him, and to keep watch before His Eucharistic Face, close to His Open Heart. Only then will pastors of souls understand how grave an offense it is to lock the churches in their care, placing a distance between Our Lord and the people in whose midst He has chosen to dwell.
An Instinct of the Believing Heart
The Visit to the Blessed Sacrament must become, once again, a part of ordinary Catholic life, an instinct of the believing heart, an expression of gratitude and reparation to Him Who is forsaken and spurned in so many places. If priests set the example, the faithful will follow it. The sheep will follow their shepherds. The green pastures prophesied by the psalmist-king in Psalm 22 are in the Eucharistic presence of Christ.
I Will Refresh You
Priests need, I think, to learn how to rest in the sacramental presence of Our Lord. He promises to refresh His priests in a way that no entertainment, no diversion, and no other means can. I know that I can go to Our Lord in the Blessed Sacrament when I am weary and lonely. I know that He is my rest and my dearest companion. I know that I will leave His Eucharistic presence restored, and with my joy renewed.
The Danger of Routine
It is time for priests actively to encourage souls to seek Him out in the Sacrament of His Love and to spend time close to His Eucharistic Heart. Nothing will bring this about more effectively than the example of a priest. It is a question, perhaps, of new habits replacing old ones. There is no greater sadness, it seems to me, than indifference to the abiding presence of Our Lord in the Eucharist. Indifference is born of routine, of a certain familiarity devoid of awe, of a ho-hum piety without what Saint Bernard calls affectus, engagement of the heart.
A Few Sparks
The restoration of the Visit to the Blessed Sacrament in ordinary Catholic life rests with priests. If, following the example of Saint Alphonsus, they were to begin practicing and preaching the Visit to the Blessed Sacrament — one or two priests, here and there — a difference would begin to make itself felt. Great fires begin with just a few sparks.
One Whom Jesus Loves
The crisis in vocations in so many places cannot be explained by sociology alone. If there is a dearth of priestly vocations, it is because there are too few priests who live in the Friendship of Christ in the Eucharist. The priest who presents himself as a friend of Jesus, as “one whom Jesus loves,” will begin to experience in his ministry the efficacy and fruitfulness that characterized that of Saint John, Saint Paul, and the first apostles. The friend speaks with an authority that only experience can confer.
The Bridegroom’s friend,
who stands by and listens to Him,
rejoices too, rejoices at hearing His voice;
and this joy is mine now in full measure.
He must become more and more,
I must become less and less.
(John 3:29-30)