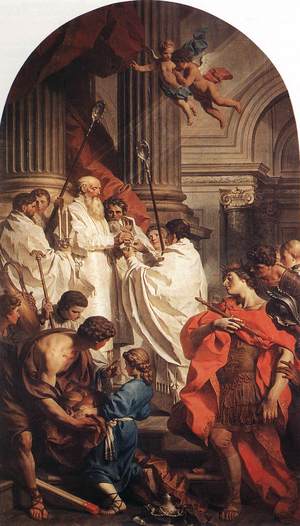 For this feast of Saints Basil the Great and Gregory Nazianzen: Part I of the Holy Father’s teaching on Saint Basil, given on 4 July 2007. The painting is “The Mass of Saint Basil” by Pierre Subleyras (1699–1749). An altarpiece painted in 1743, and originally destined for Saint Peter’s in Rome, it is now in The Hermitage Museum in St. Petersburg.
Dear Brothers and Sisters,
Let us remember today one of the great Fathers of the Church, St Basil, described by Byzantine liturgical texts as “a luminary of the Church”.
He was an important Bishop in the fourth century to whom the entire Church of the East, and likewise the Church of the West, looks with admiration because of the holiness of his life, the excellence of his teaching and the harmonious synthesis of his speculative and practical gifts.
He was born in about 330 A.D. into a family of saints, “a true domestic Church”, immersed in an atmosphere of deep faith. He studied with the best teachers in Athens and Constantinople.
Unsatisfied with his worldly success and realizing that he had frivolously wasted much time on vanities, he himself confessed: “One day, like a man roused from deep sleep, I turned my eyes to the marvellous light of the truth of the Gospel…, and I wept many tears over my miserable life” (cf. Letter 223: PG 32, 824a).
Attracted by Christ, Basil began to look and listen to him alone (cf. Moralia, 80, 1: PG 31, 860bc). He devoted himself with determination to the monastic life through prayer, meditation on the Sacred Scriptures and the writings of the Fathers of the Church, and the practice of charity (cf. Letters 2, 22), also following the example of his sister, St Macrina, who was already living the ascetic life of a nun. He was then ordained a priest and finally, in the year 370, Bishop of Caesarea in Cappadocia in present-day Turkey.
Through his preaching and writings, he carried out immensely busy pastoral, theological and literary activities.
With a wise balance, he was able to combine service to souls with dedication to prayer and meditation in solitude. Availing himself of his personal experience, he encouraged the foundation of numerous “fraternities”, in other words, communities of Christians consecrated to God, which he visited frequently (cf. Gregory of Nazianzus, Oratio 43, 29, in laudem Basilii: PG 36, 536b).
He urged them with his words and his writings, many of which have come down to us (cf. Regulae brevius tractatae, Proemio: PG 31, 1080ab), to live and to advance in perfection.
Various legislators of ancient monasticism drew on his works, including St Benedict, who considered Basil his teacher (cf. Rule 73, 5).

Indeed, Basil created a very special monasticism: it was not closed to the community of the local Church but instead was open to it. His monks belonged to the particular Church; they were her life-giving nucleus and, going before the other faithful in the following of Christ and not only in faith, showed a strong attachment to him – love for him – especially through charitable acts. These monks, who ran schools and hospitals, were at the service of the poor and thus demonstrated the integrity of Christian life.
In speaking of monasticism, the Servant of God John Paul II wrote: “For this reason many people think that the essential structure of the life of the Church, monasticism, was established, for all time, mainly by St Basil; or that, at least, it was not defined in its more specific nature without his decisive contribution” (Apostolic Letter Patres Ecclesiae, n. 2, January 1980; L’Osservatore Romano English edition, 25 February, p. 6).
As the Bishop and Pastor of his vast Diocese Basil was constantly concerned with the difficult material conditions in which his faithful lived; he firmly denounced the evils; he did all he could on behalf of the poorest and most marginalized people; he also intervened with rulers to alleviate the sufferings of the population, especially in times of disaster; he watched over the Church’s freedom, opposing even the powerful in order to defend the right to profess the true faith (cf. Gregory of Nazianzus, Oratio 43, 48-51 in laudem Basilii: PG 36, 557c-561c).
Basil bore an effective witness to God, who is love and charity, by building for the needy various institutions (cf. Basil, Letter 94: PG 32, 488bc), virtually a “city” of mercy, called “Basiliade” after him (cf. Sozomeno, Historia Eccl. 6, 34: PG 67, 1397a). This was the origin of the modern hospital structures where the sick are admitted for treatment.
Aware that “the liturgy is the summit toward which the activity of the Church is directed”, and “also the fount from which all her power flows” (Sacrosanctum Concilium, n. 10), and in spite of his constant concern to do charitable acts which is the hallmark of faith, Basil was also a wise “liturgical reformer” (cf. Gregory Nazianzus, Oratio 43, 34 in laudem Basilii: PG 36, 541c).
Indeed, he has bequeathed to us a great Eucharistic Prayer [or anaphora] which takes its name from him and has given a fundamental order to prayer and psalmody: because of the impulse he gave to the Psalms, the people loved and were familiar with them and even went to pray them during the night (cf. Basil, In Psalmum 1, 1-2: PG 29, 212a-213c). And we thus see how liturgy, worship, prayer with the Church and charity go hand in hand and condition one another.
With zeal and courage Basil opposed the heretics who denied that Jesus Christ was God as Father (cf. Basil, Letter 9, 3: PG 32, 272a; Letter 52, 1-3: PG 32, 392b-396a; Adv. Eunomium 1, 20: PG 29, 556c). Likewise, against those who would not accept the divinity of the Holy Spirit, he maintained that the Spirit is also God and “must be equated and glorified with the Father and with the Son (cf. De Spiritu Sancto: SC 17ff., 348). For this reason Basil was one of the great Fathers who formulated the doctrine on the Trinity: the one God, precisely because he is love, is a God in three Persons who form the most profound unity that exists: divine unity.
In his love for Christ and for his Gospel, the great Cappadocian also strove to mend divisions within the Church (cf. Letters, 70, 243), doing his utmost to bring all to convert to Christ and to his word (cf. De Iudicio 4: PG 31, 660b-661a), a unifying force which all believers were bound to obey (cf. ibid. 1-3: PG 31, 653a-656c).
To conclude, Basil spent himself without reserve in faithful service to the Church and in the multiform exercise of the episcopal ministry. In accordance with the programme that he himself drafted, he became an “apostle and minister of Christ, steward of God’s mysteries, herald of the Kingdom, a model and rule of piety, an eye of the Body of the Church, a Pastor of Christ’s sheep, a loving doctor, father and nurse, a cooperator of God, a farmer of God, a builder of God’s temple” (cf. Moralia 80, 11-20: PG 31, 864b-868b).
This is the programme which the holy Bishop consigns to preachers of the Word – in the past as in the present -, a programme which he himself was generously committed to putting into practice. In 379 A.D. Basil, who was not yet 50, returned to God “in the hope of eternal life, through Jesus Christ Our Lord” (De Baptismo, 1, 2, 9).
He was a man who truly lived with his gaze fixed on Christ. He was a man of love for his neighbour. Full of the hope and joy of faith, Basil shows us how to be true Christians.