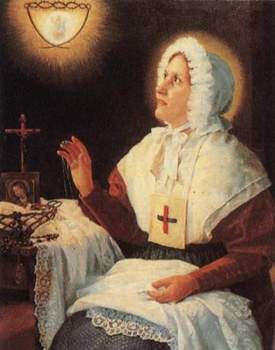 Let Thy gracious favour,
we beseech Thee, O Lord,
sustain Thy faithful,
that those whom Thou hast instructed
by the example of the virtues of Blessed Anna Maria,
may, by her intercession,
be strengthed in holy works on earth
so as to deserve to be crowned with her in heaven.
Women I Admire
June 9th is the feast of Blessed Anna Maria Taigi (1769-1837). She is dear to me because she reminds me of certain friends of mine — married women with children — who, like her, bear their crosses with generosity, dignity, and prayer. Blessed Anna Maria was gifted with a globe of light floating above her heads in which she could see the needs of the Church and of the world. In this “television” of spiritual energy she saw answers to her questions and solutions to her difficulties; from it she received direction for herself and for those who recommended themselves to her prayers. My friends do not have globes of light floating above their heads. They do have constancy in prayer, patience in tribulation, and love for their families.
Making a Home Catholic
Anna Maria arranged a little domestic oratory in her home: a crucifix, an image of the Blessed Mother and one of Saint Philomena, and a lamp, the oil of which was instrumental in working miracles. Her family prayed the rosary together every evening, followed by the reading of life of the saint of the day. They used Holy Water in their comings and goings, observed Sunday as a day of worship and of rest, and visited the sick in Rome’s hospitals. Early in her married life Anna Maria joined the Trinitarian Third Order and wore their distinctive white scapular with the blue and red cross on it. Once when Our Lord was about to ravish her into a mystical ecstasy, she said to Him, “Leave me alone. Be off with you. I have work to do. I am the mother of a family.”
Patience
She bore patiently with her husband’s roughness and outbursts of temper; he once sent the table set for dinner flying into the air and, another time, threw an upholstered chair out the window, aiming it at the head of his son running away in the street below. Anna Maria also cared for her aged parents — embittered, demanding people — with gentleness and calm.
Detachment
Cardinals, bishops, princes and noble ladies heard of Anna Maria’s mystical gifts and sought her counsel. She helped them with simplicity and never accepted money or gifts in exchange, even when these would have benefited her family. “One must not,” she said, “mix up money with the works of God.”
The Heavenly Patroness of Housewives and Mothers
On Friday 2 June 1837 she took to bed with a violent fever. A barbaric medical treatment exhausted her. She died on Friday, 9 February, at sixty–four years of age. Anna Maria left a reputation of holiness and good works. Her husband Domenico lived to give witness to her virtues at the canonical process in view of her beatification. After eighteen years, her coffin was opened: her body was like that of a person who had just fallen asleep. On 18 August 1865 her body was transferred to the Church of San Crisogono in Trastevere where it remains to the present day, still incorrupt. Pope Benedict XV beatified Anna Maria Taigi, wife and mother, on 30 May 1920.