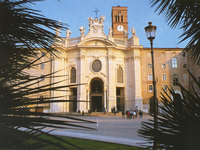 The Solemn Stational Mass of the Fourth Sunday of Lent
will be celebrated in the Basilica of Santa Croce in Gerusalemme
this evening, 18 March 2007, at 18:30.
Procession with the Litany of the Saints.
Ordinary and Proper of the Mass in Gregorian Chant.
“This Basilica is so called, because Saint Helena, not only brought the True Cross there, but earth from Mount Calvary on which the Chapel or the Altar there is built—thus if there be a centre of the Church, we shall be there, when we are on earth from Jerusalem in the midst of Rome.”
John Henry Newman, Ascension Day 1847