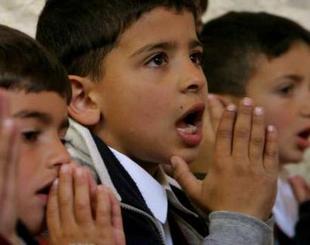 Red-covered they were passed out
one by one like a Lenten communion
drawn out of the cavernous tabernacle
of Mercy sleeves,
and distributed by a pale virginal hand,
made whiter still by Friday’s dusting of chalk.
Little hands,
sweaty from an interval in the schoolyard,
fingered them,
those fragile little books,
a little faded and a little worn.
So many children had turned them this way and that
kneeling and rising and and saying in voices that knelt and rose:
“We adore Thee, O Christ and we bless Thee,
because by Thy Holy Cross Thou hast redeemed the world.”
The candle flames flickered their way around the Church,
and between them a crucifix held high by one of the big lads,
and veiled these last two weeks in a purple sadness
like the saints covered in their Passiontide shrouds.
The priest surpliced in a lacy whiteness
with a double stream of violet falling over his chest,
read Saint Alphonsus,
boring some, I fear,
and bringing one or two quiet boys to tears,
or at least to the pity that, like a flood,
rises in a child’s heart
and then returns like the receding tide.
At the Cross her station keeping,
the Mother of Sorrows watched as
children, tired and not a little restless,
learned the journey of suffering love;
and, now and then, a few were compelled to look
at the Face fourteen times depicted
and feel something,
just something of her pain.
In the hearts of a few
(there are always a few who listen)
that Face engraved itself
so that the passing years
should become a procession from one station to the next,
not without falls in dust and in mud,
more than three, I fear,
and not without thorns, blood, and tears.
The little red book,
forgotten by most,
became for some a prophecy
and the prayers of its finger-worn pages
the secret of joy.
M.D.K.