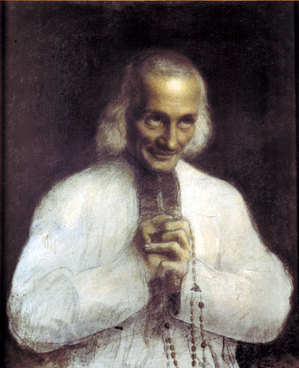 The Modification of a Collect
A few days ago, on the feast of Saint Jean-Marie Vianney, the holy Curé of Ars, I preached on the splendid Collect of the day as given in the 1962 Missale Romanum:

In English, this becomes:

Almighty and merciful God,
who didst make Saint John Mary wonderful
in his pastoral zeal
and constant prayer and penance,
grant, we beseech Thee,
that by his example and intercession,
we may be able to win the souls of our brethren for Christ,
and together with them attain to glory everlasting.

Later in the day, I had occasion to look at the Collect as it appears in the reformed Missale Romanum, Editio Typica Tertia (2008). Here is the text as given there:

In the New English Translation, this same Collect will, as far as I know, appear as:

Almighty and merciful God,
who made the Priest Saint John Vianney
wonderful in his pastoral zeal,
grant, we pray,
that through his intercession and example
we may in charity win brothers and sisters for Christ
and attain with them eternal glory.

Constant Prayer and Penance Deleted
The revised prayer of the 1970 Missal retains only one of the three priestly attributes mentioned in the older prayer, that of pastoral zeal. Constant prayer and penance, the two attributes that sustained Saint John Mary Vianney’s pastoral zeal, are deleted from the 1970 version of the prayer. On the other hand, the phrase in caritate was added to the penultimate phrase of the text.

Pastoral Zeal
If one ascribes to the axiom, “Lex orandi, lex credendi, lex vivendi” it is clear that this manipulation of the Collect has far reaching consequences for one’s understanding of how the priesthood is to be lived out. If what matters is “pastoral zeal” above all else, one risks becoming, and rather quickly, “as sounding brass, or a tinkling cymbal.” Constant prayer obtains an inpouring of divine charity; penance makes room for it in the heart. Constant prayer and penance are the context of a pastoral zeal that is supernaturally motivated and not a exercise in clerical narcissism.

Burnout
The post-Conciliar model of the priesthood placed the emphasis on pastoral zeal, while downplaying the importance of constant prayer and penance. These latter attributes were often dismissed as monastic and, as everyone knows, following the much-quoted worm-eaten old chestnut, “parish priests are not monks!” The difficulty is that pastoral zeal without constant prayer and penance leads to clerical burnout. This is something that I have seen all too often.

A Revision of the Revised Texts?
I have already suggested elsewhere on Vultus Christi that the New English Translation of the Roman Missal, while a small step in the right direction, is far from being the solution to deeper underlying issues. One must be prudent, lest the popular canonization of the euchological texts in the New English Translation of the Roman Missal, appear to suggest that the said translation, and the Editio Typica from which it was made, are, in some way, flawless vehicles of the continuity of Tradition. Perhaps the Editio Typica Tertia itself needs to be revised and brought into a more generous textual conformity with the 1962 Missale Romanum.