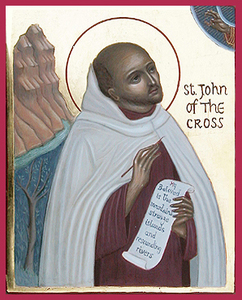 Soeur Bénédicte’s Closet
When, on the occasion of her twenty-fifth anniversary of profession, Sister Bénédicte–Marie de la Croix asked to make her retreat with us, we prepared a room for her and, knowing her Carmelite love of silence and solitude, whitewashed a large closet to serve as her hermitage. In it we placed two things: an icon of Saint John of the Cross and a Bible. Sister Bénédicte was deeply moved. She lived that retreat in the company of Saint John of the Cross. Before coming to know our Sister Bénédicte, I used to be afraid of Saint John of the Cross. He seemed so extreme, so forbidding, so unbearably absolute. It was in contemplating Sister Bénédicte’s icon of Saint John of the Cross; then, in reading him, that he became a friend, a brother, a teacher.
John of the Cross: A Saint for Advent
Saint John of the Cross comes to us in the middle of Advent; he comes to us just one week before the longest night of the year. He comes to us today when, by a wonderful coincidence, God speaks to us through the mouth of the prophet Isaiah, saying: “I am the Lord, there is no other; I form the light, and create the darkness” (Is 24:6). Saint John comes to guide us through the night; he is familiar with all its secrets.
Blest night of wandering
In secret, where by none might I be spied,
Nor I see anything;
Without a light to guide,
Save that which in my heart burnt in my side.
That light did lead me on,
More surely than the shining of noontide,
Where well I knew that One
Did for my coming bide;
Where he abode, might none but he abide.
(In an Obscure Night, trans. by Arthur Symons)
Poetry, the best poetry, is born of suffering and forged in the crucible of life. Though I find in the poems of Saint John of the Cross a fire that unfailingly warms and illumines, I have, over the years, come to rely more and more on his Precautions, an incomparable guide for the terrible quotidian, wise rules for coping with the struggles and stress of living with oneself and others.

His Poetry and His Precautions
Every Advent, I return to the Precautions of Saint John of the Cross. He wrote them between 1578 and 1579 for the nuns of Beas; at the time he was living at the monastery of El Calvario, having just escaped from prison in Toledo.
The Mystical Doctor’s teaching in the Precautions interfaces in the most remarkable way with what Saint Benedict teaches us in Chapter Seven of the Holy Rule. Here is a sampling of what Saint John of the Cross says:
Very carefully guard yourself against thinking about what happens in the community, and even more against speaking of it, of anything in the past or present concerning a particular religious: nothing about his or her character or conduct or deeds no matter how serious any of this seems.
Do not say anything under the color of zeal or of correcting a wrong, unless at the proper time to whomever by right you ought to tell.
Never be scandalized or astonished at anything you happen to see or learn of, endeavoring to preserve your soul in forgetfulness of all that.
For, should you desire to pay heed to things, many will seem wrong, even were you to live among angels, because of your not understanding the substance of them.
Take Lot’s wife as an example: Because she was troubled at the destruction of the Sodomites and turned her head to watch what was happening, God punished her by converting her into a pillar of salt [Gn. 19:26].
You are thus to understand God’s will: that even were you to live among devils you should not turn the head of your thoughts to their affairs, but forget these things entirely and strive to keep your soul occupied purely and entirely in God, and not let the thought of this thing or that hinder you from so doing.
And to achieve this, be convinced that in monasteries and communities there is never a lack of stumbling blocks, since there is never a lack of devils who seek to overthrow the saints; God permits this in order to prove and try religious.
And if you do not guard yourself, acting as though you were not in the house, you will not know how to be a religious no matter how much you do, nor will you attain holy denudation and recollection or free yourself of the harm arising from these thoughts.
If you are not cautious in this manner, no matter how good your intention and zeal, the devil will catch you in one way or another. And you are already fully captive when you allow yourself distractions of this sort.
Recall what the Apostle St. James asserts: If anyone thinks he is religious, not restraining the tongue, that one’s religion is vain [Jas. 1:26]. This applies as much to the interior as to the exterior tongue.
No Other
You may have noticed in your lectio divina of the prophet Isaiah that two words recur, almost like a refrain: “No other.” “I am the Lord and there is no other” (Is 45:6). “There is none besides me” (Is 45:6) “I am God, and there is no other” (Is 45:22). Saint John, in his Precautions, says the same thing: “No other.” He teaches us in all our nights to train our gaze on the light that shines from the Face of Christ alone and on no other. Only then are we capable of looking upon others and ourselves rightly.
From the Cross Shines the Human Face of God
We enter the Holy Sacrifice today, conscious that it is the Mystery of the Cross made present. From the Cross there shines for us the Human Face of God and no other. In the light of that Face, let us go forward, “though it be night.”